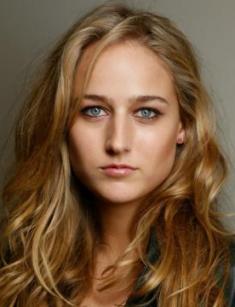 Leelee Sobieski is a movie star of the 90s, famous for the ambiguous and provocative roles. During a short career, the actress managed to work with Stanley Kubrick, Daniel Sackheim and Michael Mann. The woman who looks like Helen Hunt has done a strange thing. The actress quitted her career in Hollywood for the sake of raising children.

Liliane Rudabet Gloria Elsveta Sobieski (the full name of the actress) was born in New York City on June 10, 1983. The girl appeared in a multinational family. The girl’s mother, American Elizabeth Salomon, wrote books before her daughter’s birth, and Leelee’s father, Jean Sobieski, was a French-born painter and stage actor.

Besides creative parents, her grandfather Robert Salomon had a considerable influence on the girl; he instilled in her granddaughter pride in German, Polish, and Jewish ancestry. After the birth of Leelee, one more child appeared in the family. She has brother Robert (the boy was named after his grandfather).

Sobieski began her acting career at the age of 12. The artistic girl was noticed by a talent scout, who was looking for young talents in schools in New York City. Leelee was invited to the audition for the movie Interview with the Vampire, but in the end, Kirsten Dunst landed the role. Despite the failure, the girl realized that she wanted to become an actress.

Leelee made her acting debut in 1994. The girl got the role of Anna Yates in the movie Reunion. Her colleagues on the set were Marlo Thomas and Peter Strauss. The bit part in the full-length film was followed by several small roles in the series. In 1995, Leelee was invited to the movie A Horse for Danny. Sobieski portrayed a girl who was a good judge of horses and dreamed of helping her uncle to get rich.

The first prominent dramatic role of Leelee was the film Joan of Arc. The girl was only 16 years old, and Joan was of the same age in the period, which was shown in the movie. At that time, the actress was 5.84 ft. (178 cm) tall, and weighed 132.27 lbs. (60 kg). Leelee won the YoungStar Awards for brilliant portraying of the female warrior.

The same year, the actress was cast for Stanley Kubrick's movie Eyes Wide Shut. The girl got a bit part of the daughter of the owner of a costume rental shop. Sobieski said in subsequent interviews that Tom Cruise (her partner) was “kind and considerate with me,” and Stanley Kubrick “seemed to hold something magic.”

In 2001, the girl had to change her image completely for her role in the movie My First Mister. The blue-eyed blond actress turned into a brown-eyed brunette, who had a romantic relationship with her boss.

The same year, the actress landed another leading role. Leelee earned an income of $1 million for the character of an orphan named Ruby Baker in the thriller The Glass House. The film was a box office flop, and all love scenes, featuring her heroine, were cut during editing.

The mini-series Hercules premiere in 2005. The woman portrayed Deianeira, the wife of the great ancient Greek hero. A year later, the actress took part in the filming of the remake The Wicker Man. Leelee got a small role, portraying one of the devoted followers of the cult.

In September 2007, the Canadian crime drama Walk All Over Me was released worldwide. Sobieski played a girl who needed to pay the mafia, so the heroine got a job in the elite salon.

The 2009 film Night Train has become another memorable project of the actress. Leelee played one of the train passengers who fell under the mysterious box's influence. To shoot in the thriller, the girl had to move to Bulgaria for a while.

In 2012, the actress made a shocking statement during an interview. Leelee Sobieski decided to quit an acting career and devote herself to the family. After the unexpected news, the movie The Last Film Festival was released, in which the woman played a small role.

Leelee started the first serious relationship when she studied at Brown University. Manhattan Perry, a novice architect, immediately paid attention to the attractive blonde. The feelings of the lovers were so strong that the girl dropped her studies and stopped shooting for six months, devoting all time to Perry. Two years later, the couple broke up.

In 2004, the actress met Sean Lennon, the son of the famous musician. For the sake of a new relationship, the young man broke up with his girlfriend, but Leelee and Sean dated only for a few months.

In March 2008, news appeared in the press that the woman was dating her colleague on the set, Matthew W. Davis. The young people met during the filming of Finding Bliss. In September, Davis became the husband of the actress. After two months, the newlyweds filed for divorce.

In 2009, it became known that the actress was pregnant. The father of the unborn child was designer Adam Kimmel. In July, the young people were officially engaged, and already in December, the lovers had a girl named Louisanna Ray.

At the beginning of 2018, the solo exhibition of the former actress was held. An exposition called “Channels” was shown at the Journal Gallery in Williamsburg.

The woman devotes free time to raising children and caring for her husband. Unlike her famous colleagues, the actress, who is known for her unique views on publicity, does not have an Instagram page.

Leelee Sobieski has a net worth of $6 million.