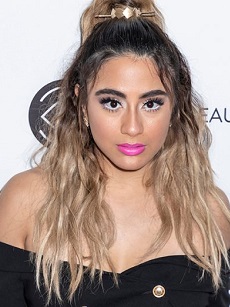 The Texas native, Allyson Brooke Hernandez received wide recognition in 2012 as a member of girl band Fifth Harmony. Her rising started from TV music competition, The X Factor, where their band became third. Since then the group released three studio albums and six EPs. In 2017 Ally made a bright flash in America as a solo artist. Her best songs were "Vámonos," "Perfect," and "Low Key." In 2019 Brooke became the participant of dance competition TV series Dancing with the Stars. Ally’s net worth is roughly estimated at $3 million, including all of her properties and earnings.

The birthplace of little Allyson was San Antonio. She was born to her parents six weeks earlier on July 7, 1993. Then her weight was at just 1 pound, 14 ounces. Patricia and Jerry were scared of Ally and fought every day for her survival. The little girl was involved in music in her childhood. When she was nine years old, she was a school star.

Ally performed at her high school, charity events, and sports events. At the same age, little singer began performing around her hometown of San Antonio. She did those performances around town at different places and fell in love with it. Three years later, Ally went to Los Angeles and wrote her first songs.

Ally began her studies in Cornerstone Christian elementary school but later switched to homeschooling, which she successfully completed. As a young singer, she took inspiration from her idol and another Texas native, Selena Quintanilla. Selena had a lot of iconic performances in San Antonio, and Ally felt the connection to her.

The X Factor and Fifth Harmony

Brooke made her first steps in music industry in 2012, decided to try her hand at a television music competition franchise, The X Factor. She overcame the audition and went to the boot. However, her performance was controversial. Singing Jaci Velasquez’s song, Ally didn’t stop performing, when the music stopped playing. Several judges were critical of such a trick, but Ally’s wonderful voice helped her to get into boot camp.

Soon, Ally dropped out of the competition, but the judges brought her back along with several other participants. The girls were given a second chance: they became the quintet, called Fifth Harmony. The group started successfully, shown its potential on live shows. At the end of The X Factor’ season, the band took the third place.

The act made history in 2016 as the first girl group to score a top 10 Billboard Hot 100 smash in nearly a decade with the snappy “Work From Home.” After six years of a successful career, Fifth Harmony announced that they would be going on an indefinite hiatus to pursue solo endeavors.

Ally Brooke started her solo career while being a member of The Fifth Harmony. She was only the third group’s member to release solo material. She spread her wings with a feature on Lost Kings’ rebound anthem “Look Us At Now.” The song hit iTunes on June 8. Ally introduced herself as a seasoned club queen, singing: “Look at us now. I just drove to your house, ready for another; “When we’re here together, don’t this just feel better, yeah?” and “We’re better when we’re not tied down, turn my ex to my rebound.”

Soon Brooke appeared with a new track on the stage of Wildstyle Battle, a freestyle rap competition during which both teams dish out hilarious derogatory raps against each other. Also, on March 8, 2018, Wild 'N Out celebrated International Women's Day, invited a few superstar women to participate in the show's antics. Angela Rye, Tami Rosen, and XSCAP3 member Tiny joined the show as the women's appreciation themed episode was capped off with a performance by Ally Brooke.

Ahead of the 2018 Academy Awards, Ally performed an amazing medley of Oscar-winning songs on E!'s red carpet. Dressed in a stunning peach gown, Ally belted her way through the likes of “Moon River,” “The Way We Were,” “Beauty and the Beast” and Céline Dion's iconic Titanic single “My Heart Will Go On.” The entire performance was stunning and gave guests all chills.

March of 2018 was full of serious event in Brooke’s career. Shortly before the breakup of the group, Ally signed as a solo artist with Maverick/ReignDeer Entertainment, home to Britney Spears, Pitbull, Aerosmith, and Steven Tyler, among others. Brooke was represented by Larry Rudolph in partnership with William Bracey for management of her career in all areas. Rudolph also managed Fifth Harmony.

In April signed a record deal with Latium Entertainment/Atlantic Records. The company announced that Brooke was expected to release her debut solo single later that fall. The San Antonio native debuted live with a new Latin-pop bop called "Vámonos" at Fusion Festival in Liverpool, the U.K. Her performance to the upbeat, Spanish-language track was dance-heavy, with several backup dancers included in the choreography.

In 2019 Brooke became the guest of several TV shows’ episodes. She appeared with new songs "Low Key" featuring Tyga, “Higher” with Matoma, and "Lips Don't Lie" featuring A Boogie wit da Hoodie. In August Ally came to Cottonwood Mall, Albuquerque and performed some of her favorite songs. The same Ally became the cast member of the new season of "Dancing With the Stars" along with "Bachelorette" Hannah Brown, "Queer Eye" star Karamo Brown and former NBA star Lamar Odom.

In the premiere, episode Ally revealed being a big fan and got ready to meet her partner Sasha Farber. He said he felt like he has won the jackpot and they had been ready to get going. For their dance, Ally emerged from pink lasers to show off a fast, well-paced cha-cha. Both Sasha and Ally took advantage of the entire dancefloor to get in their moves.

At the judge’s table, Len was ready to talk about too much thrusting and gyrating. In what he called “Beyonce stuff.” Bruno loved her sense of attack but went too fast in anticipation of the beat. Carrie Ann agreed with Bruno that there had to be tone. She saw a lot of potential in that pairing. The same day when Brooke performed on the show, she debuted with a new music video. The song, “Higher,” became a dance mix that seemed perfect for the show.

Allyson’s post-Fifth Harmony career involved writing of a book. The pop star shared her memoir “Finding Your Harmony” with the world in April 2019.

In 2012 Allyson was connected to The X Factor contestant, Drew Chadwick. The couple lasted several weeks. Soon, she was romantically involved with a singer, Drew Chadwick, but their story also finished in a couple of months. The year of 2012 was full of love affairs, and Brooke found a new boyfriend, a musician and Internet star, Troy Ogletree.

In January 2013, Troy and Ally went on a romantic trip, posting their photos. They visited various parties and music events. On April 1, 2014, Fifth Harmony tweeted that their sister, Ally Brooke, was getting engaged. The girls wished her all the happiness and love in the world. Later the tweet was confirmed as a prank on the occasion of April fool’s day. After a three year relationship with Troy, Ally called it quit in November 2015. As of autumn 2019, Brooke was single.