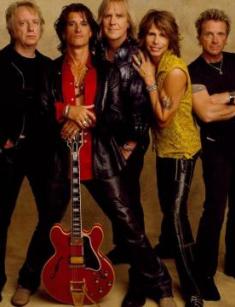 Aerosmith is the iconic rock group that has been performing for half a century; many of their fans are younger than their hits. The band has won four Grammys, ten MTV Video Music Award, and the International Artist Award. Besides, Aerosmith is the leader among American groups in terms of album copies (more than 150 million) and the number of gold and platinum discs. VH1 included the musicians to the 100 Greatest Artists of All Time.

The story of Aerosmith began in 1970 in Boston; sometimes, the group is referred to as “The Bad Boys from Boston”. Some sources report that the would-be members Steven Tallarico known as Steve Tyler and Joe Perry had met before in Sunapee: the former played in Chain Reaction and presented a couple of singles while the latter collaborated with his friend, the bassist Tom Hamilton, in Jam Band.

The artists’ genre preferences were similar: hard and glam rock, blues, and rock’n’roll. Perry offered Tyler to organize a new team; the drummer Joey Kramer from Turnpikes and the guitarist Ray Tabano joined them. Soon, Brad Whitford replaced Tabano; he could play the guitar and trumpet.

The newly formed group debuted at Nipmuc Regional High School; they performed under the name “The Hookers” at that period. “Aerosmith” came later: it was invented by Kramer; it was probably his nickname. Initially, the young men gave concerts in bars and schools and earned some $200 per night. They moved to Boston then and continued to copy Eric Clapton, Led Zeppelin, and The Rolling Stones. Little by little, the musicians gained some experience and derived their own style.

In 1971, the president of Columbia Records Clive Davis visited the young men’s show at Max’ Kansas City. He promised to make the musicians famous – and he kept the promise. However, the group did not endure the pressure that came with fame and wealth: they consumed alcohol and drugs. The number of fans was growing rapidly.

The new lineup presented the album Rock In A Hard Place. Soon, it was clear enough that nobody benefitted from the novelties. The manager Tim Collins helped: he worked with Perry and organized the former colleagues’ meeting in Boston. Collins also initiated the musicians’ rehabilitation course and the contracts with Geffen Records. Aerosmith also started working with the producer John Kalodner who brought success to Cher and Iron Maiden.

Under Kalodner’s supervision, the band re-recorded the album Get a Grip that topped Billboard in 1993 and became platinum six times. Besides, he appeared in the music videos “The Other Side”, “Let the Music Do the Talking”, and “Blind Man”. The video “Dude (Looks Like a Lady)” showed the producer in a wedding dress: he often wore white in his daily life.

Further on, several other producers worked with Aerosmith: the lover of the guitar drive Ted Templeman; Bruce Fairbairn, who encouraged the band to wrote more ballads; Glen Ballard with whom the musicians remade half of the album Nine Lives. At that period, Steve’s daughter, Liv Tyler, started to shoot for the group’s music videos.

The musicians collected a wide range of titles and awards, tried themselves as actors, and got involved in trouble. Steve had surgery on his leg after an accident with a microphone stand, and Kramer almost died in a car crash. Hamilton recovered from throat cancer, and Perry had a concussion when a camera crane hit him during a show.

In 2000, Perry received a present from the Guns’n’Roses Shalsh: his own guitar that he had pawned it in the 1970s to receive some money. As it turned out, Hudson bought the instrument in 1990.

In March 2001, Aerosmith was included in the Rock & Roll Hall of Fame.

Aerosmith has presented 15 studio albums, a dozen collections and concert discs. The debuting album Aerosmith was notable for the trademark song “Dream On”; later, Eminem used a part of it. In 1988, Guns’n’Roses included the song “Mama Kin” in their album G N'R Lies.

After the new album Get Your Wings, the audience finally began to distinguish them from Mick Jagger’s team. Tyler became known as a vocal acrobat for his tinned voice and snake-like behavior on the stage.

Toys in the Attic is considered the hard-rock classics; it is one of the group’s masterpieces that got into the top ten of Billboard 200. The track “Sweet Emotion” came out as a single; it reached the eleventh position in Billboard and had six million copies sold. The 1976 album Rocks was also platinum. The following opuses Live! Bootleg and Draw the Line sold out well, but critics did not appreciate them much and believed it was the product of the artists’ drug fever. The tour in Great Britain failed, and the musicians were accused of copying The Rolling Stones and Led Zeppelin.

1985 marked the new epoch: the team proved its readiness to come back to fame. The remix to the song “Walk This Way” featuring the hip-hop group Run DMC was popular in clubs, and Aerosmith returned to the first positions in music charts.

The next album Permanent Vacation contained the cover on The Beatles’ “I’m Down”; more than five million copies were sold. British Classic Rock put the disc to the top 100 rock albums of all times. The tenth studio album Pump was also there; six million copies were released.

Steve Tyler’s songs “Angel” and “Rag Doll” demonstrated the singer was just as good at ballads as Jon Bon Jovi. The hits “Love In An Elevator” and “Janie’s Got A Gun” surprised fans with orchestration and pop elements.

The vocalist’s daughter Liv Tyler began her acting career with the music videos “Cryin’”, “Crazy”, and “Amazing” from Aerosmith’s album Get A Grip that became platinum seven times. Lenny Kravitz and Desmond Child participated in its recording.

The group’s music is innovatory and conceptual; it is often used in computer games and movies. For example, “I Don’t Want to Miss a Thing” is the soundtrack for the blockbuster Armageddon. Fans could see the most expensive costumes ever in the music video to this song: 52 spacesuits each of which cost $2.5 million.

In 2017, Perry claimed the group was going to give concerts until 2020 minimum; Tom Hamilton supported him and added Aerosmith had something to show their fans. However, Joey Kramer was not so sure about the further activities: the artists were not as young as healthy as they used to be. Eventually, Brad Whitford told journalists it was time to finish.

The good-bye tour was named Aero-Vederci Baby! and began on April 2, 2017. The logo with wings was presented; many fans had tattoos with this picture.

The rock legends did not want to stop their activities at once. Today, they continue to give concerts; for instance, they appeared at the New Orleans Jazz & Heritage Festival and MTV Video Music Awards in 2018. 2019 has brought the concert residency Deuces Are Wild in Las Vegas.