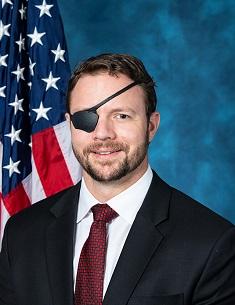 Daniel Reed Crenshaw is an American politician who used to serve in United States Navy SEAL. He is the Texas Republican representative elected in November 2018. In summer 2019, Crenshaw signed a $250,000 deal to publish a book titled American Tough; it will be released next year.

Daniel Crenshaw was born in Scotland in 1984 to the American parents. He grew up in Texas. At the age of 10, Daniel lost his mother to cancer, and while his father was occupied in the oil industry, the boy spent his time in Colombia and Ecuador, where he learned the Spanish language.

Speaking about his education, Crenshaw attended Colegio Nueva Granada high school in Colombia, where he graduated in 2002. Four years later, Daniel received a Bachelor of Arts degree at Tufts University, where he majored in international relations. In 2017, Crenshaw graduated from Harvard University's Kennedy School of Government, where he got a Master of Public Administration degree. Then, he worked for Congressman Pete Sessions.

When Crenshaw was studying at Tufts University, he joined the United States Navy’s officer training program. After graduation, he was commissioned in the Navy. For ten years, Daniel served in the Navy SEALs. In 2012, he was serving in Afghanistan, and there he got the injury due to the improvised explosive device blast. Crenshaw lost his right eye, and for saving his left one, he needed surgery. After surgery, Daniel refused to quit and had two more deployments – to the Middle East in 2014 and then South Korea in 2016.

In 2016, he retired from military service as a Lieutenant Commander.

After military service, Crenshaw came back to Houston, which community was hit by Hurricane Harvey. Daniel volunteered and helped his neighbors try to recover from the damage. Texan resilience inspired him to do more for the community, so Daniel and his wife found the best way to serve the people of Texas – to be in elected office.

So, in 2017, Crenshaw announced that he would run for the United States House of Representatives in Texas's 2nd congressional district. In one of his interviews, Daniel thanked national security advisor John Noonan for encouraging him to run and also stated that his two main election issues would be immigration and border security.

From the first round of the Republican primary election, Daniel and Kevin Roberts got ahead. The super PAC that was funded by Roberts' relative, Mark Lanier, concentrated on Daniel’s statements of the 2015 year, which were critical of presidential candidate Donald Trump, despite the fact that Robert was also against Trump. The PAC also compared Crenshaw's policy proposals to the ones of Senator Bernie Sanders and President Barack Obama. After Daniel received the endorsement of Senator Tom Cotton, he also got national attention.

Speaking about Daniel’s political positions and beliefs, he is anti-abortion, and in the issue of immigration, he agrees with Donald Trump's proposal to build a border wall on the Southern border. After the mass shootings in Dayton, Ohio, and El Paso, Texas this year, in a question of the gun control, Crenshaw posted on his Twitter page that he proposed to implement state ‘red flag’ laws and some anti-gun orders.

As a Navy SEAL, Crenshaw received decorations, including the Purple Heart, two Bronze Star Medals, and the Navy and Marine Corps Commendation Medal with valor.