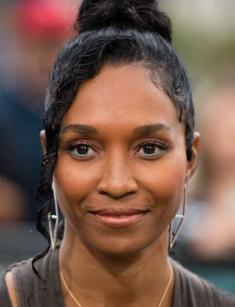 Rozonda Thomas is an American singer, dancer and actress of African, Arab and Bangladeshi descent. She rose to stardom as a member of the R&B girl band TLC, using her Chilli alias.

The future celebrity was born on February 27, 1971, in Columbus, Georgia.

Her father's name is Abdul Ali, he's of Bangladeshi and Arab origin. Her mother's name is Ava Thomas, she's African American. Rozonda's parents split up quickly. She met her dad for the first time at the age of 25. The family reunion was shown on TV.

Apart from Rozonda, her dad has another daughter, Marni Ali Williams.

Rozonda started her career in show business by dancing. In 1991, the TLC founder left the group and Thomas replaced her. She took the nickname Chilli to preserve the TLC acronym. This band was a tremendous success and won several Grammy Awards.

In 2020, Thomas began to work on a solo album. She had to postpone its release because she had to switch to the new TLC album. Eventually, Rozonda's solo work never saw light. A few tracks leaked. In 2008, she released a debut single.

In 2016, her third and last solo single hit the market. It was called Body and was aimed to promote Rozonda's fitness workout campaign.

In 2019, this lady had to stop her singing career because of health issues.

In the 1990s, this celebrity was invited as a guest to several TV projects.

In the next decade, she appeared in various movies and shows.

In 2005, she took part in the R U The Girl reality series to hunt a new TLC member.

In 2010, the What Chilli Wants reality series hit the screen. It showed Rozonda's attempts to find true love.

When the star was 20 years old, she got pregnant. The kid's father was her producer, Dallas Austin. Their relationship lasted from 1990 to 1999. Rozonda thought that the fact of having kids might be detrimental to her career and resorted to abortion. The couple regretted that later. In 1997, their son Tron Austin was born. He is reported to have siblings from his father's side. His mother has never given birth to other children and has never had an official husband.

In the 90s, Rozonda also had an affair with Marlon Wayans.

In 2021, this lady got a new boyfriend, Usher. She was featured in his music videos. They split up in two years. Chilli accused Usher of infidelity. He stated that their relationship was doomed anyway because they weren't a good match.