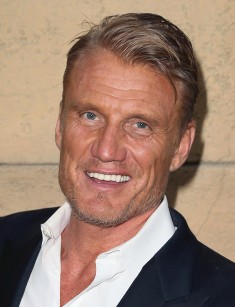 Dolph Lundgren is an actor, film director, screenwriter and producer from Sweden. He became famous for the roles in Hollywood action movies.

Dolph was born in the suburb of the Swedish capital, in the small town of Spånga. Karl Lundgren, the father of the future actor, was an engineer and an economist who worked for the Swedish government. Birgitta Lundgren, Dolph's mother, worked as a language teacher at a school. Dolph was the first child of Karl and Birgitta. Later, they had three more children: girls Annika and Katharina and boy Johan.

As a child, Dolph was a feeble and sickly child with allergies. He was not self-confidence because his father was physically abusive. To prove to himself that he can become a better person, the boy attended martial arts training. Initially, the teenager chose classical art of judo, but then Lundgren transferred to karate and practiced two styles: Gōjū-ryū and Kyokushin. The young fighter succeeded in the latest style of martial arts. In 1977, the 20-year-old athlete won the Swedish Championship. Then for two years in a row, he defended the title. In 1979 he participated in the World Championship, where he lost only in the final. In 1980 and 1981, he became the winner of the UK Open Championship.

Since 1979, he served in the Swedish armed forces in the naval infantry regiment. After army discharge, he studied at Royal Institute of Technology in Stockholm and the University of Sydney. In Australia, Dolph received a master's degree in chemical engineering. After the graduation from the Australian University, Lundgren was invited to the Massachusetts Institute of Technology, where he was awarded a Scholarship. But while studying in Sydney, Lundgren met a famous singer and actress, Grace Jones, who hired the athlete as a bodyguard. Dolph Lundgren left for the USA.

The young man went to New York City and worked as a model, a dancer. He also earned money as a bouncer in clubs and studied at acting classes.

Dolph Lundgren made his movie debut having played a bit part in the James Bond film A View to a Kill, where the young actor portrayed the KGB General’s henchman. Then the novice actor sent the portfolio to different studios for a long time, but they refused because he was very tall. Nevertheless, he took into consideration the pros and cons and participated in a photo session portraying a boxer. So, Dolph got the role of a negative hero, Soviet athlete Ivan Drago, in the movie Rocky IV with Sylvester Stallone. Critics call this role the first breakthrough in Lundgren’s acting career.

The actor got a leading role two years later in the film Masters of the Universe, based on comics. The film was a box office flop, as well as the movie Red Scorpion, in which Lundgren played a Russian once again. The following films The Punisher and Dark Angel were also not warmly welcomed. Critics called Lundgren an actor who was associated with one role. They said that his acting talent is much worse than his muscles. The Hollywood actor has mainly played roles in action films.

Dolph continued to portray strong guys, although he chose scripts with interesting dialogues. The most famous films of that period were Showdown in Little Tokyo in 1991, in which Lundgren played a policeman fighting against the Japanese mafia, and the Universal Soldier in 1992, where Jean-Claude Van Damme became his partner. Dolph played the sadistic American soldier Andrew Scott. Experts continued to jump all over the actor's acting, but these films were a great commercial success.

Then Lundgren's career began to decline, and the press practically stopped writing about him. During the 1990s and the 2000s, critics appreciated only a few movies, which, despite the commercial failure, were worth watching. First of all, this is the 1995 cyberpunk thriller Johnny Mnemonic, in which the muscular actor played the role of a street preacher. They also liked the crime movie Joshua Tree, the action film The Peacekeeper and the war drama Diamond Dogs. Preparing for the film Pentathlon, Dolph Lundgren became the Team Leader of the 1996 U.S. Olympic Modern Pentathlon team during the Atlanta Games.

In 2004, viewers liked the American-Canadian action movie Direct Action. In this film, the actor played police officer Frank Gannon, whose last days of service were a real test.

Lundgren returned his fame thanks to the film Universal Soldier: Regeneration, where the actor played aged Andrew Scott. The same year, the actor participated in Sylvester Stallone's movie The Expendables. Stallone directed the film which had a starring cast.

Critics consider the action-thriller Skin Trade to be the last significant film with Lundgren.

Dolph has also worked as a director, producer and screenwriter in the films The Defender, The Mechanic, Missionary Man, Command Performance and Icarus. Dolph owns the production company, The Thor Production.

Dolph Lundgren has had several famous love affairs. He had the first relationship with the actress of Jamaican origin, Grace Jones, who promoted the actor in the world of show business. Dolph dated fashion models Paula Barbieri, Janice Dickinson and Stephanie Adams, as well as actresses Samantha Phillips and Leslie Ann Woodward.

In 1990, the actor began dating his compatriot Anette Qviberg, a jewelry designer. Dolph and Anette got married in 1994. In this marriage, the couple had daughters, Ida Sigrid, and Greta Eveline. Dolph and Anette lived in Spain because they wanted to protect children from the temptations of Hollywood, but in 2011 the marriage broke up.

The actor knows many foreign languages. Dolph Lundgren is fluent in Swedish, English, and Spanish.

Dolph Lundgren holds the rank of 2nd dan black belt in karate. He became the European heavyweight champion in the UK and Australia. Nowadays, fans cannot but admire his body measurements (Dolph’s height is 195 cm, the weight is 109 kg).

In 2016, the media reported that Dolph Lundgren was thinking about a possible move to Russia. The actor said in an interview that he was extremely dissatisfied with the results of the US presidential election. According to the Hollywood star, Donald Trump, who won the election, is not able to govern the American state effectively.

Commenting on the electoral outcome in the USA, Dolph said that Russian President Vladimir Putin deserved more respect than the representative of the Republicans because he proved the ability to govern the state.

“Of course, I’m not an expert in politics, but President Vladimir Putin is calm and organized. He is a mature politician. He always has a plan,” the Swedish actor said in an interview.

In 2017, the actor took part in the shooting of the music video for the famous American band Imagine Dragons. The group presented the video for the song “Believer.” After watching the video, Instagram users and other social networks recalled Dolph as a Soviet boxer in the movie Rocky IV.

Dolph Lundgren continues to film. The movie Black Water is scheduled to be released in 2018. It is planned that famous actors such as Jean-Claude Van Damme, Al Sapienza, Patrick Kilpatrick, Jasmine Waltz, and others will also appear in this film.

The Swedish actor also got a role in the movie Aquaman, which is scheduled to premiere in 2018. In this movie, Dolph Lundgren will not play the title character because the cast is quite impressive. Jason Momoa, Amber Heard, Nicole Kidman, Temuera Morrison, Willem Dafoe, Patrick Wilson, and Michael Beach will be Dolph Lundgren’s partners on the set. In April 2017, director James Wan told about the future shootings.

“Been hardest (and most excited) secret to sit on. But finally, welcome to Atlantis, @Dolph_Lundgren,” the director wrote in the microblog on Twitter.

The actor will portray the main antagonist, King Nereus. The director said that Lundgren’s character would be very different from the hero of the comics. 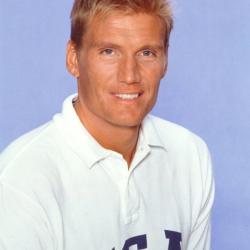