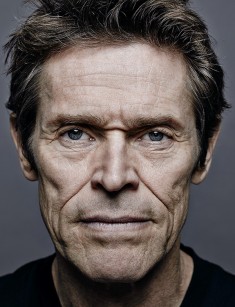 A human being is thought to be capable of learning anything – singing, painting, cooking, building houses, driving a vehicle, playing sports games, and many other things. It is also known that the majority of people have inclinations to some activities – such people are said to have been born for them. This idea is especially relevant to the American Willem Dafoe, the actor of the remarkable appearance and undeniable charisma.

The would-be actor was born in a small town Appleton situated on the river Fox 160 to the south from Milwaukee, the administrative center of the state Wisconsin on July 22, 1955.

William (the boy’s name at birth) is the 7th child of the surgeon William Alfred Dafoe and the nurse Muriel Izabel, nee Sprissler – before, the family had 5 daughters and a son. The youngest child was also a boy.

After school, Willem moved to Milwaukee where he enrolled in dramatic art courses at the University of Wisconsin. However, he did not finish the course and went touring with Theater X, the oldest American experimental theater that existed till 2004.

With Theater X, Willem traveled all over the USA and Europe; 4 years later, in 1976, he came back to America and settled in the USA. At that time, he became the member of another theater group – The Performance Group led by Richard Schechner. Later, some actors under the leadership of Elizabeth LeCompte left The Performance Group to organize their own group – The Wooster Group. Dafoe was the member of The Wooster Group until the mid-2000s. Simultaneously, other children of William Alfred Dafoe and Muriel Izabel were studying to be doctors and lawyers.

For the first time, Willem took part in a movie shooting in 1980. Michael Cimino’s “Heaven Gates” was supposed to be his debut, but due to a quarrel with the director, all the episodes with Dafoe were deleted. Later, Willem admitted he did not regret it because Cimino’s work became a large failure.

The true debut happened only two years later. Dafoe played the biker gang leader from the group “Outlaw” in the movie “Loveless.” 2 years later, he starred in a similar movie by Walter Wesley Hill “Streets of Fire.”

A year before, Dafoe appeared in the cult vampire movie “The Hunger” by Tony Scott in which David Bowie and Catherine Deneuve starred. In 1984, Willem took the leading part for the first time – he starred in the crime comedy “Roadhouse 66.” In 1985, he played in the movie “To Live and Die in L.A.” by William Friedkin (“The Exorcist,” “The French Connection,” “Sorcerer”).

The actor became truly famous in 1986 when the first movie of the Vietnamese trilogy “Platoon” by Oliver Stone was out. Dafoe played the secondary role of the sergeant Gordon Elias, for which he was nominated for Oscar for the first time, while the major role was entrusted to Charlie Sheen.

In 1988, Dafoe played Jesus Christ in Martin Scorsese’s “The Last Temptation of Christ” which was the screen adaptation of the Nikos Kazantzakis’s novel under the same title. The director Sergio Leone expressed his displeasure that Dafoe was assigned this role and stated that a person who had been playing bikers, gangsters, and soldiers, could not play a messiah. The same situation happened to the Russian actor Sergey Bezrukov when he played Christ (Yeshua Ha-Notsri) in “The Master and Margarita.”

1988 was also marked for Dafoe with his participation in “Mississippi Burning” by Alan Parker (“The Midnight Meat Train,” Angel Heart,” “The Life of David Gale”). The movie told the story of the real civil rights activists’ murders that occurred in Mississippi in June 1964. Except for Dafoe, the movie starred Gene Hackman and Frances McDormand.

In 1989, Willem collaborated with Oliver Stone; the second movie of the Vietnamese cycle – “Born on the Fourth of July” – was the result of this cooperation. Tom Cruise and Kyra Sedgwick starred in the movie; except for Dafoe, Tom Berenger also took part.

At this time, Tim Burton’s “Batman” was released. Initially, the main antihero Joker was going to be played by Willem – actually, the scriptwriter Sam Hamm created this role for Dafoe, but something went wrong, and it was Jack Nicholson who played Joker. In 1990, Dafoe starred in the movie “Cry-Baby” where then young Johnny Depp took the leading part.

In the same year, the actor took part in David Lynch’s “Wild at Heart.” In this movie, his partners were Nickolas Cage and Laura Dern. Next year, the movie “Flight of the Intruder” by John Milius (“Conan the Barbarian,” “Red Dawn”) came out. In this work, Dafoe played the lieutenant Virgil "Tiger" Cole; Danny Glover and Rosanna Arquette were his partners.

1994 was marked with the release of Tom Clancy’s screen adaptation “Clear and Present Danger” about the special agent Jack Ryan played by Harrison Ford. The movie was created by Phillip Noyce, the director of “Sliver,” “The Bone Collector,” and “Salt.”

Except for Willem, the movie starred Christopher Walken and Asia Argento. In 1999, “Existenz” by David Cronenberg (“The Fly,” “Videodrome,” “Scanners,” “The Dead Zone”) appeared. Jude Law and Jennifer Jason Leigh had the major roles.

In 1999, another cult movie with Dafoe was out - Troy Duffy’s “The Boondock Saints.” Willem played the FBI agent Paul Sliker; the movie also starred Sean Patrick Flanery and Norman Reedus known for his role in “The Walking Dead.” Together with him, Dafoe starred in the sequel.

In 2000, Mary Harron’s “American Psycho” and Edmund Elias Merhige’s “Shadow of the Vampire” in which Dafoe played were out. Played by Dafoe, the vampire Max Sсhreck aka Nosferatu turned out scary, even though his height was 178 cm.

In 2002, the world was shown “Spider-Man” that gave a new beginning to the superhero movies. The project started in 1986. At different stages, the comics screen adaptation attracted James Cameron, M. Night Shyamalan, Roland Emmerich, Jan de Bont, Chris Columbus, and David Fincher. Sam Raimi who had created the trilogy about the evil dead and the superhero movie “Darkman” starring Liam Neeson was the final candidate.

Green Goblin was supposed to be the archenemy of Spider-Man. Many actors were offered this role, among them John Malkovich and Nicolas Cage with whom Dafoe had starred earlier. Willem was not considered as a candidate, but the actor was so captured with it that he recorded his own auditions and gave it to Raimi who appreciated the actor’s mastery. As a result, Dafoe starred in all three parts of the movie about Spider-Man.

The short movie “The Smile Man” is worth being marked among other works. It was created by the new Russian director Anton Lanshakov, the participant of Kevin Spacey’s contest “Jameson first shot.” Overall, the actor starred in about 200 movies. Besides, Willem has never stopped working at the theater as an actor.

In 1982, Willem’s common-law wife Elizabeth LeCompte (the leader of the theater “The Wooster Group”) gave birth to the son Jack. At the beginning of the 2000s, the couple broke up.

In 2017, three movies with Dafoe came out. The anime adaptation “Death Note” released by Netflix was the first among them – here, Willem played the death god Ryuk.

The third movie in which Dafoe had taken part was “Justice League.” This time, the actor played the DC comics character Nuidis Vulko (Green Goblin belonged to Marvel). By the way, in this movie, his Spider-Man colleague Jonathan Kimble Simmons. On the Internet, it is possible to find photos from the movie shooting. 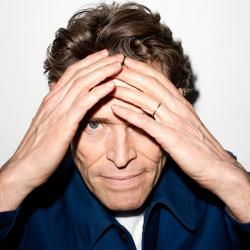