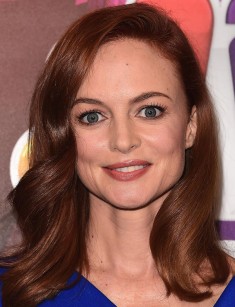 Heather Graham is an American actress who was noticed after the youth comedy License to Drive. A couple of years later, she played a drug addict in Drugstore Cowboy and appeared in the iconic series Twin Peaks.

Heather Joan Graham was born on January 29, 1970, in Milwaukee, US. The girl’s father worked for the FBI, and the mother was a teacher at a local school and wrote books about children’s upbringing. Heather and her younger sister were raised in the Catholic manner. Because of the father’s job, the family had to move frequently.

Throughout her childhood, Graham lived in ten states and changed ten schools. Because of the strict family, the future Hollywood celebrity could star only on the school theater stage.

As the young woman finished school, she persuaded her parents to accompany her on her first audition. The mother and the father agreed and regretted their decision. At first, they were glad Heather was passionate to achieve her goal and built the acting career. Still, it was important for them that their daughter should not shoot naked; they also insisted Heather reject the projects requiring the participation in sex scenes.

When Heather started shooting, she forgot her parents’ instructions, and their relationship deteriorated.

Just as any beginning actress, Graham often went to auditions. She also worked part-time as a waitress in nightclubs and bars so that she did not have to take money from her parents or borrow money from her friends.

The youth-oriented movie License to Drive became her first work; the actress got an episodic role. In 1989, Gus Van Sant offered the young woman the role of a drug abuser Nadine in his Drugstore Cowboy. Although the audience and critics welcomed the movie, directors did not see a perspective actress in Graham.

In the next two years, Heather continued to receive only episodic roles, although she collaborated with many Hollywood stars: Keanu Reeves, Will Smith, Jon Favreau, James Woods, and Robert Downey, Jr.

In 1990, the actress participated in David Lynch’s Twin Peaks and earned her fame. The work O Pioneers! was also significant.

In 1999, the movie Austin Powers: The Spy Who Shagged Me was released; Heather personified the sexy Barbie doll. It is interesting that this type of a character took root: Graham often played uninhibited girls in further movies.

In 2000, Graham participated in the movie From Hell; the work in The Guru followed. The thriller Killing Me Softly created by the Chinese director Chen Kaige in English turned out to be a failure.

In 2006, the actress played in the comedy series Emily's Reasons Why Not. After the first season, the project was closed. It was the blow for the charming blonde: the magazine Life with her photo on its cover was going to be released by the beginning of the series.

In 2013, the movie Horns with Daniel Radcliffe and Juno Temple was premiered. It is the story of the young man Ig Perrish who wakes up in the morning to find horns on his head. At the same time, he obtains a devilish ability to make people say what they really think when Ig is nearby; all their dirty secrets are discovered.

2016 was marked with the series Flaked, Angie Tribeca, and the movie My Dead Boyfriend. The latter tells the story of the young woman whose lover died in a car crash. However, death did not reduce his passion: the man comes to the main character as a ghost and interferes with her life.

Few people know that Heather refrained from the Catholic faith and converted to Hinduism in 1991. The actress does not communicate with her parents and keeps in touch with her younger sister Aimee who also devoted her life to the stage.

The celebrity does not keep secret her private life. Moreover, she always answers provocative questions during interviews and claims there are no taboo topics for her.

The actress has never wanted to marry. The charming actress used to date Leonardo DiCaprio, Edward Burns, Kyle MacLachlan, Russell Crowe, and Josh Lucas. None of them became her husband, though.

In one of her interviews to Vegas, Heather said career was the priority for her in comparison with family. She also emphasized she would leave cinematography without hard feelings as soon as she meets the person who would give her the confidence in the future.

In September 2017, two movies with Heather Graham came out. Last Rampage was based on a true story that happened in 1978 when Gary Tison and another person convicted for murder escaped a state prison in Arizona without having taken great pains.

The escape was organized by Tison’s sons who later helped their father and his accomplices run away to Mexico. Throughout the movie, police officers try to catch the criminals and keep an eye on the fleeing felon’s wife who was sure her husband was innocent.

The woman knew her spouse had been condemned for the murder of a guard, yet she refused to believe in facts. Moreover, Gary had convinced her he killed only when it was necessary.

The second movie, Wetlands, told the story of a man who started a new life with his daughter and a new business partner in Atlantic City.

The same year, the actress participated in the mini-series Law & Order True Crime. The plot is focused on the Menéndez family in whose house the double murder occurred: the father José and his wife were killed.

The couple’s children, Erik and Lyle, became the main suspects. The young people were pressed by investigators who could not comprehend what had happened that day. The Menéndez brothers gave different testimonies, behaved in a weird way, and even offered their own versions of who could have committed that terrible crime.

Despite her busy schedule, the actress remembers her fans and regularly posts photos from movie screening and videos from her vacation on her Instagram.

Not only social networks but also Internet portals and printed media often publish materials related to the Hollywood star’s biography and latest news. 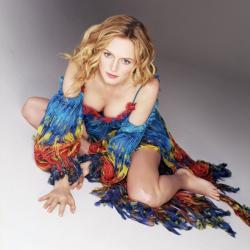