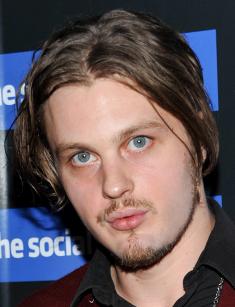 Michael Pitt is an American actor, vocalist of the band Pagoda. Michael was born on April 10, 1981, in West Orange, New Jersey. He has two older sisters and a brother. In 1985, Michael’s parents, Gilbert and Marry Pitt, broke up and sent the younger child to his grandmother in Austin. Michael has had a rich imagination since childhood. At first, he dreamed of becoming a carpenter, and then a painter. At the age of 12, the boy got a guitar and became interested in music.

Later, he was impressed by the Hollywood film about the life of an English traveler, and Pitt made the final decision to pursue an acting career and began performing in amateur theatre productions. After graduation, the young man entered the American Academy of Dramatic Arts in New York City, where he graduated in the early 2000s.

When he was a second-year student at the drama school, Michael began working in TV series and films, where the novice actor got bit parts. Pitt appeared in the projects Law & Order, 54, Hi-Life, Finding Forrester. In the 2001 comedy Hedwig and the Angry Inch, Michael played a rock musician who decided to have a sex change.

Having played minor roles in the films The Heart Is Deceitful Above All Things and The Village, Michael Pitt received an invitation to portray rock musician Blake, whose character was inspired by the deceased singer, Kurt Cobain, in the drama Last Days. Director Gus Van Sant tried to avoid the similarity of the script with the latest events in the life of the rock star in every possible way.

The director was afraid of claims by the musician’s widow, Courtney Love, so he created a complex, intertwined storyline. The film debuted in 2005 at the Cannes Film Festival. One year later, young and tall (his height is 5.90 ft. (180 cm)) Michael Pitt with a memorable appearance appeared in the comedy Delirious, in which the actor got the leading role of Toby Grace. The ridiculous character of homeless turns into a lucky paparazzi. Steve Buscemi played together with Michael in the film.

In 2007, the actor's filmography included the historical drama Silk, in which Michael Pitt and Keira Knightley’s characters were caught up in a love triangle. The same year, the thriller Funny Games was released with Naomi Watts, Michael Pitt and Tim Roth in the lead roles. Two years later, the actor made his debut in the significant HBO television project, the series Boardwalk Empire, directed by Martin Scorsese. Although Michael worried a lot at the audition, the actor was offered the leading role of a poor student, Jimmy. The television ratings of the first season of the gangster drama were very high, and the producers decided to renew it for five seasons.

The next prominent project with Michael was Hannibal on the NBC channel. In the thriller, Pitt played a minor character of Mason Verger, who was attacked by Hannibal in his youth and survived. The same year, two movies featuring Michael were released. These are the crime drama Rob the Mob, in which the American portrayed the protagonist, Tommy Uva, and the science-fiction melodrama I Origins, in which Michael played a post-graduate student, Ian Gray, who accidentally made an important discovery.

In the early 2000s, Michael became a member of the band Pagoda, where he played the guitar and sang. The actor’s musical talent was useful in movies. In the films The Dreamers and Last Days, Pitt performed songs on his own.

There are no essential changes in Michael Pitt’s personal life. Since the beginning of the 2000s, the American actor has lived with Jamie Bochert, a model and former ballet dancer. Unlike his characters, the actor does not smoke and leads a quiet life. Pitt appears with his wife at social events.

Fans who are interested in the biography of their idol, often look for family ties between Michael and Brad Pitt. Actually, the actors are just namesakes. Pitt does not have an account on Instagram. Michael has no tattoos, which is evident if we see his photos on the Internet.

In 2016, Michael Pitt played a minor role of a kidnapped hacker in the crime thriller Criminal with Kevin Costner in the lead role. In March 2017, Rupert Sanders’s fantasy action movie Ghost in the Shell premiered.

In the film, Michael got the role of Cyborg Kuze / Hideo, and Scarlett Johansson’s heroine Major Motoko Kusanagi fell in love with him.

The tragic love story unfolds in the era when cybernetics improved people's everyday lives but did not reduce the number of crimes in the world. The film grossed $170 million worldwide for three months. Now the actor participates in photo shoots for men's magazines. The net worth is $6 million.