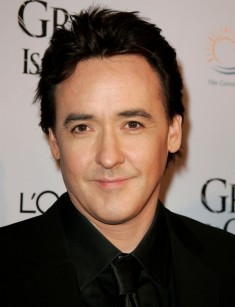 John Paul Cusack is an American movie actor who has become world popular in 1997 after the release of the picture Grosse Pointe Blank for which the actor wrote the script himself. Also, John became the star of the movies Hot Tub Time Machine, Serendipity and Must Love Dogs.

John was born in the State of Illinois in the family of Maths teacher Ann Paula Carolan and the actor Richard Cusack. The boy became one of the five children in the family: John has a brother Bill and also sisters Ann, Joan, and Susie. All five children have followed in the footsteps of their father and have become actors.

Cusack had his first acquaintance with the stage when he was three years old. The boy was entrusted with the role of the dog in the children performance of Cinderella in which all his family took part. Instead of the studies at high school, John visited the theatrical school. Only studying at high school, he began to receive education at Evanston Township High School. The teachers noted the actor's talent of the boy and even entrusted John with the roles in "adult" plays. Though the teenager was dreaming about the career of the baseball player, and he didn't take the theater and cinematography for serious.

Nevertheless, at the age of twelve John Cusack received the job on the local radio station, and for a couple of years, he worked as an announcer and also recorded advertising. It was hard for him to combine serious sporting training with his part-time job on the radio and in the theatre, though the young man tried to succeed in it. There is also some discrepancy of the perception of the childhood by the actor. The teachers described John as a happy boy, enthusiastic and cheerful. And Cusack himself says that when he was a teenager, he hated school and despised the authority and government and also he felt like the misfit in the society.

After the completion of the studies John Paul Cusack entered the New York University, but here he has studied only during one course as he understood that he "already was fed up with the studies." The young man gave up higher education institution and went to conquer Hollywood.

John Cusack turned seventeen years when he first took part in the movie. He appeared in the youth melodrama Class and later participated in more than eighty pictures. At the beginning period of his movie career Cusack was entrusted with the leading roles, for example in the adventure movie The Journey of Natty Gann, the comedy One Crazy Summer and the criminal melodrama Bullets Over Broadway.

Cusack had his first breakthrough in the professional career in 1997. At first, John took part in the creation of the high-rate thriller Con Air and then appeared in the criminal drama Midnight in the Garden of Good and Evil. After this movie he has realized his old dream – he achieved attention to his script of the black comedy under the title Murderer from Grosse Pointe Blank. When this movie was released the movie critics, and the spectators began to talk about John.

After this Cusack’s career began to take off. The actor took part in numerous movies, and in most of them, he had leading roles. Among the popular pictures, it's worth noting the romantic movie Serendipity; light melodrama Must Love Dogs, family drama Martian Child and ironic comedy Hot Tub Time Machine.

In 2003 there came out on the screen the detective thriller Identity with the participation of Cusack. This movie tells the story about the group of the tourists who have to find refuge in the nearest motel because it’s raining outside. Though the motel didn’t save the tourists from the maniac.

The actor was offered to play an interesting role in the thriller The Raven: Cusack played the character of the author of this classical poem - Edgar Allan Poe. From the latest fresh works of Cusack, the gripping movie The Bag Man received positive feedback and high rates. In this picture, the actor embodied the role of the killer Jack who realizes the task on the delivery. Unexpectedly it appears that the criminals, police and FBI agents are hunting for this bag. Except for Cusack, Dominic Purcell and Robert De Niro took part in this movie.

At the end of 2000, Cusack couldn’t refuse the offer in the movie-catastrophe of 2012 directed by Roland Emmerich in which he performed the leading character of played Jackson. He was one of the few people who managed to survive during the accident of the planetary scale. The project turned out to be successful in the hire and grossed $788 million in the world. Among the movies in the actor’s filmography, there are also the roles in the pictures The Numbers Station, The Paperboy, The Butler, Adult World.

The admirers of the actor John Cusack call them one of the most handsome men. The celebrities have the same opinion. The personal life of the actor was saturated. In different times John had love affairs with the celebrities – the actresses Minnie Driver, Neve Campbell, Jody Lyn O'Keefe, Jennifer Love Hewitt, Brook Burns, the director Alexandra Carrey and also with the model Alison Eastwood, the daughter of Clint Eastwood. The joint photos with gorgeous stars regularly appeared on the pages of the glossy editions. But none of the girls managed to conquer Cusack's heart and to become the actor's spouse.

John was quite often attacked by his admirers. So in 2008, the girl called Emily Letterman arranged the real hunting on the Hollywood star, but the police stopped her in due time and forced her to have obligatory observation at the psychiatrist.

John Cusack leads an active way of life. The actor has many hobbies. The actor has professionally learned to fly a helicopter and in his free time he snowboards. He has been engaged in the kickboxing for 20 years already, and he has a black belt in it.

Moreover, the actor is a fan of the sports teams from Chicago. John visits the matches of Chicago Bears football club and Chicago Blackhawks hockey team. But the baseball has remained Cusack's most favorite sport since childhood. The actor equally supports Chicago Cubs and Chicago White Sox even though the fans of these clubs are considered rivals and even and even have conflicts between themselves.

It’s worth noting that John Cusack has one more hobby - he is a follower of Maharishi Mahesh Yogi’s doctrine which is called Transcendental meditation. When receiving the new role, the actor uses the meditation that will help him to understand the psychology, character, and depths of his personage's soul.

John Cusack stays a popular actor and producer. In 2016 there came out the apocalyptic thriller Cell, and John Cusack became the director of this movie and the actor of the leading role. The major character of the picture Cell of Clayton is among the few survivors after the beginning of the massacre. Clayton sets off for the searches of his wife and son.

The plot of the movie is based on the novel written by "the king of horror stories" - Stephen King. This is not the first participation of John in the screen adaptations of the books of this writer – Cusack already performed the role of Mike Enslin in the thriller based on the story of 1408.

In 2017 the actor performed in the crime drama Arsenal where Nicolas Cage played the role of the brother of John Cusack’s character. John also took part in the crime movie Blood Money in which he appeared in the role of Miller. He sets off for the search of the lost money which he earlier had stolen from the client. Cusack has managed to embody the image of the ordinary person who because of his passion for money becomes the criminal, and later the murderer.

One more project of this year is dedicated to the topic of the rescuing planet. This is the thriller Singularity in which John Cusack's character struggles against Kronos computer system which aim is humanity's extinction.

At present, the actor is engaged in the detective story under the title Distorted about the married couple which after the death of their child moved to the high-rise building equipped with the improved security system. After the relocation, the spouse began to notice that the inhabitants of the house have strange behavior. Christina Ricci and John Cusack performed the leading role. The thriller will be released in a couple of different form including the format of virtual reality. 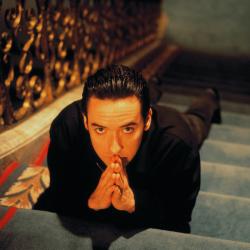