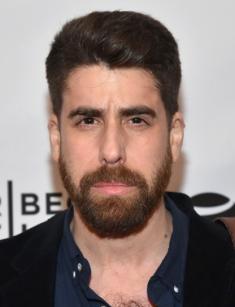 Adam Charles Goldberg is an American actor, director, producer, and musician. He is known for his appearance in movies like Dazed and Confused, Saving Private Ryan, Zodiac, and television series Friends, The Jim Gaffigan Show, The Unusuals, and Fargo. Goldberg often depicts stereotypically Jewish characters.

Adam Goldberg was born in California in 1970. His parents’ names were Donna and Earl Goldberg. Goldberg’s family has Mexican, Irish, French, German, Russian descent. Adam’s father was Jewish, and mother’s Catholic, so their son wasn’t raised religious at all. However, Adam became a symbol of contemporary Jewish culture.

As a kid, Adam got inspired after seeing a Shakespeare production at the drama class at his school. It was the moment when he understood that he wanted to connect his life to this sphere, so he started taking acting classes. Speaking about Goldberg’s education, he attended Sarah Lawrence College, where he was rather active in various theatrical performances.

Goldberg’s debut leading role was Eugene Gimbel in Mr. Saturday Night (1992). However, the part which can be called as his breakthrough was Pvt. Stanley Mellish in Steven Spielberg's film Saving Private Ryan (1998). David Fincher, a director of the Panic Room (2002), offered Goldberg the role but he had to refuse because of his commitment with the television show, The $treet (2000). Eventually, the part was played by Jared Leto.

In 2005, Goldberg starred in the documentary The Fearless Freaks about the rock band Flaming Lips. He also had a supporting role of Dr. Scott Zero in Christmas on Mars, a film directed by Wayne Coyne, a Flaming Lips’ frontman.

Goldberg also worked as a writer, producer, and director, for instance, the Scotch and Milk (1998) and I Love Your Work (2005). In 2003, Goldberg played the role of Mordechai Jefferson Carver in The Hebrew Hammer after Adam Sandler, Ben Stiller, and David Schwimmer turned down this offer.

Besides acting, Goldberg is a musician who composed the music to the movies I Love Your Work (2005), Running with the Bulls (2003), and Hebrew Hammer (2003). Adam plays in the band LANDy who, by the way, collaborated with Flaming Lips drummer Steven Drozd. Another group, where Goldberg plays, is The Goldberg Sisters, which performed on The Late Late Show with Craig Ferguson.

In 1995, Adam starred in the television sitcom Double Rush as a delivery boy Leo. After that, in 1996, the actor appeared in the famous television series Friends. He played two roles: Eddie, a strange and crazy roommate of Chandler Bing, and Jimmy, Joey Tribbiani's close friend from high school. Besides, Goldberg also played the central role in the Fox series Head Cases (2005).

In 2009, Adam starred in the television series The Unusuals, and his character was played perfectly, judging by reviews. Goldberg played Eric Delahoy, a detective who suffers from brain cancer but refuses to be treated due to his dislike of doctors. In 2012, Adam appeared in another cop series, NYC 22.

In 2015, Goldberg appeared in The Jim Gaffigan Show as Dave Marks, Gaffigan's best friend. Two years later, the actor started playing the role of a computer hacker Harden Kilroy in the drama series Taken. In 2019, Adam played the supporting role of Simon Hayes in the God Friended Me.

By the way, Adam is often confused with Adam Frederick Goldberg, the creator of the television sitcom The Goldbergs with Sean Giambrone as Adam F. Goldberg, Stephanie Katherine Grant as Emmy Mirsky and others. One day, Adam Charles was offended after being mistaken for Adam Frederick, and they started a little feud on Twitter. At the same time, both of these Adams are confused with another Adam Goldberg who is a member of the cast of Harmontown, a comedy podcast which is hosted by Dan Harmon and actor Jeff B. Davis.

Speaking about Goldberg’s love life, he does not have a wife, but he is in a relationship with a designer, Roxanne Daner, since 2010. He and his girlfriend welcomed their first kid, Bud, in December 2014. It was really happy news for them because before that, in 2012, they had a stillbirth with their first child, Bix. In 2018, the pair had their second son.