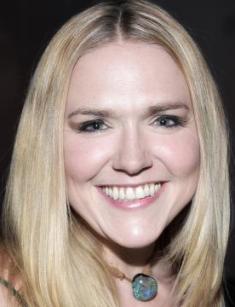 Dominique Ariane Swain is an American actress, who began to make her career at the age of 12. The girl became famous thanks to filming in the movie Lolita. Later, such tapes as Face/Off and Alpha Dog appeared in her filmography.

Dominique Ariane was born in the family of the electrical engineer David Swain, Sr. and Cindy Swain on August 12, 1980. The birth of the child occurred in Malibu, California.

Her father had other children from his first marriage, a daughter and a son. Dominique Swain was not the only child in her family. The actress has elder sisters Alexis and younger Chelsea.

The parents sent their daughter to school in Malibu. Dominique learned sports, art, and, of course, music during these years. The girl managed to find time both for a hobby and for occupations, despite a wide choice of entertainments. So, Swain got a diploma of an excellent education.

Dominique Swain`s career began since the filming in the movie The Good Son at the age of 12. The young girl was invited as a backup for Quinn Culkin. The elder brother of the performer, Macaulay Culkin, played in this tape too.

And her parents decided to take their daughter to audition for the tape Lolita. The plot was based on the novel of the same name by Vladimir Nabokov. This prestigious event for Dominique's career happened in 1995. There were 2.5 thousand young actresses but the 14-year-old girl got the lead role in the movie Lolita thanks to her talent.

The work on the tape lasted for two years. There was another movie Face/Off in the filmography of Dominique in this period. The TV star started working on this tape later than on the movie Lolita. Therefore, the movie Face/Off is the first work of Swain in her filmography.

Her beginning in acting seemed incredible but Dominique was nominated for several awards for the first two works at such a young age. The actress would receive the Saturn Awards in the category Best Performance by a Younger Actress. She would win this prize for her participation in the movie Face/Off.

The teenager was nominated by the Chicago Film Critics Association for the movie Lolita. Dominique Swain was nominated for the MTV Movie Awards for Best Kiss along with Jeremy Irons, her partner in the tape Lolita. Hollywood spoke about Dominique as a new star, although the girl got the only victory.

A drama called Girl was the next in the list of Swain`s filmography. Dominique had only the leading roles thanks to her participation in Lolita. In 1999, such movies as The Intern, later Bad Girls, Happy Campers, My Mother Frank, Dead in the Water were released.

The popularity of the young performer began to fade. The movies, in which the girl starred, had no success. Dominique was not invited to play leading roles. Swain played minor characters in the tapes Pumpkin, New Best Friend, Briar Patch, The Freediver, Out of Season, Journeyman.

The TV star got an episodic role so the girl could not show herself. The career of the talented actress stopped since the filming in the tape Alpha Dog. The girl was invited to the movies that could not be cash and Dominique failed to gain popularity after this movie.

The actress starred in such movies as Fall Down Dead, where Swain acted as producer, Prairie Fever, Stiletto, Road to nowhere, Embers.

Dominique Swain prefers not to talk about her own life. There was information in the media after the movie Happy Campers and College about the affair of the performer and Brad Renfro. But young people did not confirm this information. In January 2008, the man died of an overdose of drugs. It is unknown about Dominique`s reaction to this tragic news.

There are many rumors about Swain`s affairs but she is in no hurry to confirm or deny them. The girl prefers to protect animals in her free time. In 2001, Swain posed nude for PETA's "I'd Rather Go Naked than Wear Fur" campaign at the age of 21.

Representatives of the movie industry believe that high-profile stories about the personal life of Dominique would help her in the formation and development of a career as an actress. But she preferred to keep this door closed. The bright, tall 5,6 feet (173 cm) and slim 125 lbs (57 kg) girl disappeared from the big screens.

Dominique Swain does not have an official page on the social network "Instagram. " The photos of the performer appear in the social chronicle, for example, at the premiere of the movie, in which the young woman starred. But Dominique does not want to quit her job. She continues to try new roles. Dominique Swain has a net worth of $2 million.

In 2017, fans of Dominique will see the star on the big screen in such tapes as Spreading Darkness, Boone: The Bounty Hunter, The Fast and the Fierce, Battle Drone, The 6th Friend. Swain again appears in the lead roles in these tapes.