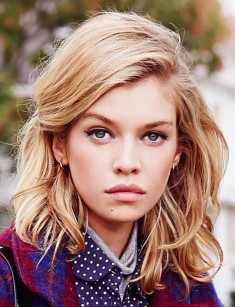 Stella Maxwell is a popular top model who conquered the eminent designers with her beauty. Since 2015 she is the "angel" of the underwear brand - Victoria's Secret.

The future model was born in spring, on the 15th of May, 1990, in Belgium. Stella is Irish, but she spent her young years in New Zealand where she had moved together with her parents at the age of thirteen years. Her two brothers and a sister were also brought up in their family. Mother and father of the future supermodel are Northern Irish diplomats.

Stella finished the college in Wellington. Then she entered the University of Otago.

Once in cafe Stella was seen by the famous photographer who was fascinated by the tender beauty of the girl. He suggested Stella taking a couple of trial pictures and she accepted his invitation. As a result, the future "angel" was noticed, and soon the name of Stella Maxwell became known in the model business.

Stella was invited to the casting at the time of her studies at the university. But the girl preferred to finish her studies at first, and then to be engaged in the career. From the model agency Stella at once directed to the beauty salon to have her hair cut short. In this way, she attracted the attention of the employers. The short fair hair distinguished the girl from the other models.

The first professional photos of Stella were taken for "Vogue" magazine. Kate Moss was a leading model in this photoshoot and Stella stood in the background. But the girl was happy to have a possibility to work with the photographer Mario Testino.

The career biography of Stella began to take off quickly. The girl was invited to take part in significant shootings. Soon she appeared in the following magazines - "ELLE" (Italy, Taiwan), "VOGUE" (Japan), "MARIE CLAIRE", "GLAMOUR", "PUMA". In addition, Stella's photos appeared in the commercials of world famous brands.

According to the model parameters, Maxwell has a medium height, but all the same, Stella was noticed by the eminent designers. She regularly performed at fashion displays. Her participation in the fashion shows for Jeremy Scott, Chanel, and Marc Jacobs can be considered the most memorable.

In 2014 and 2015 the supermodel was invited to the final fashion displays of Victoria's Secret. The girl proved herself to be a professional, and soon Stella was chosen as a new "angel" of the well- known company. The photographers note that the girl has an ability of transformation. They consider that Stella has traits of the models of the 20th century.

Stella Maxwell is a bisexual.

In summer of 2015, the information about Stella's relations with the popular American singer Miley Cyrus appeared on the internet. Miley is a daughter of the famous country style performer - Billy Ray. Since 2009 Stella was in a relationship with the younger brother of Chris Hemsworth – Liam. Three years later the couple announced their engagement, but in 2013 the young people broke up. Then the girl shocked her admirers with defiant performances and behavior.

In July 2015 paparazzi captured Stella and Miley kissing each other behind the scenes of the shootings of Miley's video. The girls hadn't disproved the guesses of admirers and regularly appeared together in the pictures on "Instagram". Such extravagant trick was rather expected from Miley, but Stella's orientation became a real shock for her admirers at that time.

But the love affair of the girls had lasted for three months only. Her fans still consider this relationship of the singer and the model to be a PR stunt. Soon after parting with Stella, Miley Cyrus reunited with Liam Hemsworth. And in October 2016 she reported that she was again engaged to the young man.

Since the end of 2016, the private life of the "angel" has been under the sight of the cameras again. And all because of the fact that she began a torrid love affair with the actress of the Twilight saga - Kristen Stewart.

During a long time, Stewart had had relations with the men. Michael Angarano and the favorite of public Robert Pattinson were among her boyfriends. Stewart is considered to be guilty of the fact that the director Rupert Sanders divorced his wife Liberty Ross. In summer of 2016, the actress confirmed her bisexuality and reported that she was meeting a girl. Kristen had love affairs with the actress Soko and also with the ex-girlfriend of Cara Delevingne – Anne Clark.

At the end of 2016, Kristen set her eyes on Victoria's Secret "angel" – Stella Maxwell, and it was mutual. The pictures of the couple regularly appear in the network. Girls don't show their feelings on their personal pages, but also they don't hide their romantic relationship. Their relations were confirmed after Maxwell's appearance on Stewart's shootings Savanna in December 2016.

The girls spend a lot of time together and walk, holding hands. The couple attends film festivals and fashion shows together.

Stella considers Barbara Palvin, Gigi and Bella Hadid, Kendall Jenner, Hailey Baldwin and Lily-Rose Depp to be her close friends. It was said that Stella had a short love affair with the last mentioned model after the pictures of the girls from the photoshoot devoted to female love were published.

The magazine which was applying for the title of the American version of "Maxim "called Stella the sexiest woman of 2016. Then the girl appeared on the cover of this glossy magazine.

Stella is fond of yoga. She loves books written by Mikhail Bulgakov, especially the novel "The Master and Margarita".

Sunflowers are favorite flowers of the girl. Stella likes to wear colorful socks and chokers.

She worked on the musical project and wants to try herself as a performer.

The model is obliged to genes for her gorgeous figure. But all the same, she keeps her body in shape and regularly practices sports. Unlike other supermodels Stella practices neither veganism nor vegetarianism. She loves seafood and meat.

At present time Stella participates in the fashion displays of Victoria's Secret underwear brand. She is the face of Max Factor cosmetics.

Stella and her girlfriend Kristen Stewart live together in the suburbs of Los Angeles. In the network there regularly appears information about the couple’s parting.

The things got heated when paparazzi saw Kristen Stewart in the company of her ex-boyfriend and colleague from the shooting stage - Robert Pattinson on the 14th of February, 2018. But the couple of "Bella and Edward" behaved decently and didn't show any romantic impulses. Therefore, the rumors about Kristen's break-up with Stella just remain rumors.

In February 2018 their close couples reported that the girls were going to adopt a child. Soon it became known that it was only a publicity stunt. 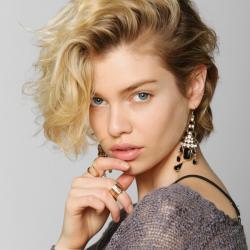