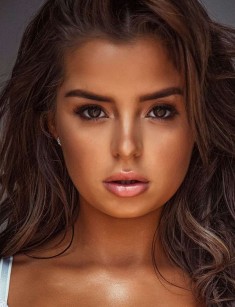 Demi Rose cannot be called a classic top model because her parameters are far from the standard 90-60-90, and the height of the girl is by no means 180cm. Low Demi has ample curves and a thin waist. However, this did not prevent her from succeeding not only as a model but also an online personality. The lady’s photos on the Instagram gain thousands of likes for a few minutes, and the number of subscribers will soon reach 7 million.

Demi Rose Mawby was born on March 27, 1995, in the British city of Birmingham in the family of Barrie and Christine Mawby. The girl is of British and Colombian ethnicity. Demi graduated from the college with a degree in Beauty Therapy in her hometown and she is fluent in Spanish.

Since childhood, Rose dreamed about the modeling business, but her height and weight were not appropriate for the catwalk. Despite the absence of extra weight, she is tiny with the height of only 157 centimeters. The model’s appearance is similar to Kim Kardashian. Demi is often called the “British Selena Gomez”.

Rose's favorite hobby at school was to post photos for the popular social network MySpace. At age 18, Demi signed up on Instagram, where she posted professional photos together with selfie. Her profile became popular so quickly that people began to recognize the girl on the street. Brand owners began to offer shooting in commercials of underwear and clothes.

In 2015, Demi’s biography changed radically. The model moved from Britain to America. Rose immediately started to participate in the reality show Taz's Models. Beautiful ladies lived together in the house in Miami, where they did training, took care of themselves and participated in photoshoot sessions. Demi was invited to well-known magazines after the show. Her photos were on the pages of For Him Magazine and Nuts. Several years ago, Rose became the World’s sexiest woman according to the Zoo Magazine.

Demi starred in the music videos of hip-hop artists as the girl's appearance is suitable for filming in such a video. Rose worked with Chris Brown and DJ Khaled.

Self-confidence and assertiveness helped Demi achieve popularity. A bright brunette is not afraid of bold statements, which only attract attention to her personality. In one recent interview, Rose said that her life is perfect. The lady shows her body to the world, challenging Kim Kardashian. Demi believes that Kim looks much worse than her.

The nude model often poses for photographs. Sometimes it seems that her account needs a limit of 18+. In 2016, the beautiful lady bragged her body, getting naked for the cover of the SIXTY6 magazine. The private parts were photoshopped with the like and the strip with the name of the magazine.

But it's one thing to pose nude for the camera, and the other is to appear at social events in revealing clothes. Moreover, it is not even about the plunging necklines or slit skirts. Demi allows herself even worse things.

The same year, the model appeared in a provocative dress at the SIXTY6 party. The neckline in the form of a metal ring barely covered her large breasts. Eroticism is present in every photo. Fans shower Rose with compliments, many people write in the comments about their fantasies without hesitation.

Demi is not afraid of any hackers as the young woman posts herself the most revealing photos on the Internet. There are photos of completely nude Rose on the adult sites.

In May 2016, Demi began dating the popular in the US rapper Tyga. Before the relationship with Rose, the young man had relations with Kylie Jenner, the half-sister of Kim Kardashian. Fans were amazed at how similar the rapper's girlfriends were. They both have similar face and body. Romantic relations lasted not for long, the couple broke up for unknown reasons.

According to photos on the Instagram, nowadays the girl dates Chris Martinez. The first joint photo of the kissing couple was published on Demi's page in December 2017 at the Madrid airport. Chris is a famous DJ, performing with his brother Stevie. Since 2011, they have played at popular venues such as Ibiza's elite clubs, Creamfields and Tomorrowland festivals. The lover calls Chris "my king" in the comments to the joint pictures.

There are rumors about the amazing body of the model. They say that Demi underwent plastic surgery for breast and buttocks augmentation. Rose denies plastic surgery, explaining that the figure is a gift of nature and the result of hard work. Demi regularly does sports with a personal trainer, keeps on a diet.

In February 2018, Demi shared revealing pictures taken during the rest on the island of Mykonos. During the day, Rose posed in a flesh-colored swimsuit, the lower part of it was barely noticeable, in the evening she boasted large breasts, wearing a revealing blue top without a bra. 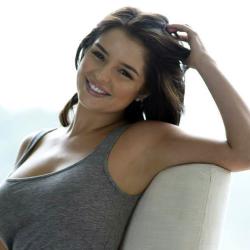