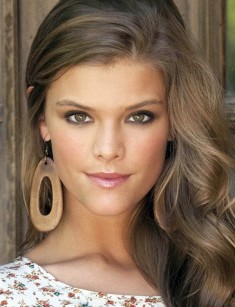 Nina Agdal is a Danish photo model who is demanded in the model business due to her participation in the shootings for the popular f brands of Victoria's Secret, Frederick of Hollywood, Macy.

The girl was born in Hillerød, which is situated to the northwest of the Denmark capital - Copenhagen. Since childhood, Nina wanted to become famous as she has inherited attractive natural appearance and has made up her mind to become engaged in the model business. Her tall height of 176 cm and weight of 55 kg have contributed to this.

Being a schoolgirl, Nina took part in the beauty pageant of Elite Model Look and has made a positive impression on the jury. The Danish department of Elite Model Management was the first agency which concluded the contract with Nina. But while the girl was studying at school, she couldn't visit other countries to take part in the shootings. After the completion of the studies, Nina Agdal has expanded the geography of her cooperation.

Later, when the model became demanded, she began to cooperate with the branches of this company in Germany, Holland and the USA. Agdal advertises the women clothing garments and also the accessories. Nina Agdal’s body parameters (82-60-90), and her long slender legs allow the girl to look gorgeous without the outerwear.

Nina has become the face of the swimsuit line of La Boheme French company. The girl took part in the advertising campaigns of such brands as Billabong, Adore Me, Bebe Stores and Calzedonia. The photos of the beautiful model appeared on the covers of the popular international editions – Elle and Cosmopolitan.

The most long-lasting cooperation of the model is connected with the American Frederick's of Hollywood company. For one shooting in the international Sports Illustrated magazine in 2012 Nina Agdal received the special Rookie of the Year prize which is given to the best model of the year.

Nina Agdal also took part in the shooting of the cover for the 50th-anniversary edition of this magazine together with the model and TV host Chrissy Teigen and the top model, Victoria’s Secret "angel" - Lily Aldridge. Also, the shots with other stars appeared on the pages of the edition: Emily Ratajkowski, Emily DiDonato, Sara Sampaio, and others. Nina was very responsible for this shooting and considered it to be the peak of her model career.

The next achievement of the model was her appearance in the TV commercial of Super Bowl championship of two leagues on the American soccer in 2013. With time this annually held event received the status of the national holiday in the USA, that's why only celebrities are invited to take part in the commercials. Kim Kardashian, Padma Lakshmi, Paris Hilton, Kate Upton took part in the advertising campaign of the tournament.

In 2016 Nina Agdal became the model of IMG Models agency. The same year the photo model became the main star of the advertising of Leonisa Christmas trademark. During the shooting Nina appeared in the bra of the thematic holiday colors: scarlet and white with the gold ornaments. Besides the print advertising, there was also released the video with Nina Agdal. The leading character, who was looking for the best gift take out various gifts from the Christmas bag, but the girl's attention is captured with the red-colored Leonisa bra which the girl keeps to herself.

For a long time, Nina Agdal was dreaming of getting to the movie industry. The girl even appeared on the movie sets of the American TV series Inside Edition, Extra and The Insider in which Nina performed the cameo roles.

In the romantic comedy, Don Jon Agdal received the anonymous role of the supermodel what can be regarded just as the display of her usual professional skills. But in the expressive comedy under the title Entourage, Nina received a real opportunity to feel herself in the feature movie. The model got an episodic role though it was a real role of the actress. She performed the role of Bridgite and understood what it meant to be a real actress.

The Danish model Nina Agdal has plenty of fans including the celebrities. The girl's name was connected with the love affairs with the vocalist of the extremely popular music band Maroon 5 – Adam Levine. Later, Nina was meeting the model Reid Heidenry and one more British singer - Max George, the member of The Wanted rock band.

And in July of 2016, the public found out the information that the famous American and Oscar-winning actor became Nina Agdal's beloved. Three years earlier they already tried to have relations, but then these attempts didn't result in anything serious. But when they again met in New York nightclub, the actor and model decided to begin everything one more time.

Their relationship has lasted till May of 2017. In June the young Danish model was captured in the company of Christie Brinkley's son Jack who is three years younger than Nina. The young people were seen embracing each other for a couple of times.

The girl has a bad habit – she smokes. The model has repeatedly become the object of the provocative shots made by paparazzi. To appear less often at the shots of the annoying reporters, the girl has managed to give up smoking, but it's possible that at present Nina conceals this fact.

At present, the photo model is in her best professional form. In 2017 Nina Agdal enriched her collection of the magazines on which covers she has appeared. She appeared on the covers of Maxim, Eurowoman, and Health magazines. Nowadays Nina has settled in the resort of Miami, in the State of Florida. The model has a favorite pet – her dog of puggle breed nicknames Daisy whose photos are often published on Nina Agdal’s personal Instagram page. 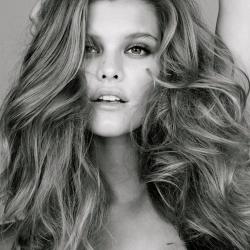