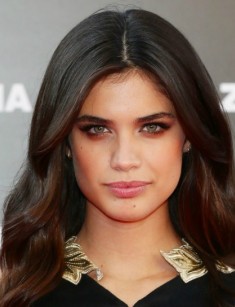 Sara Sampaio is the angel in television ads for Axe Effect, the top model from Portugal. She is well-known and in demand not only in model agencies but also in cinema.

Sara Sampaio was born on July 21, 1991, in Leça da Palmeira (the district in Portugal, in the outskirts of Porto), and her zodiac sign is Cancer. There is no much information about Sara's childhood. It is known that the girl has been interested in the modeling business since her youth.

Sampaio made the first steps in the fashion industry at the age of 15, although her parents insisted that the girl should focus on studying. At 16, the future celebrity won the Cabelos Pantene Contest of a cosmetic company owned by Procter & Gamble.

As a reward, they offered to participate in the shampoo commercial. Besides, she was invited to photo shoots in various magazines, but the model did not walk on the runway.

Sara Sampaio debuted on television in the commercial for the Pantene products. At the insistence of the family, the model entered the University of Lisbon. After graduation, Sara decided to continue her career in the modeling business, although she holds a degree in editing.

In 2011, the model appeared in world-famous magazines such as Elle, Vogue, Marie Claire, and also starred in a video for Armani. She cooperated with Blumarine and Replay (alongside fashion industry stars Irina Shayk and Adriana Lima).

Since 2012, Sara Sampaio has become the face of Calzedonia underwear (Raphael Mazzucco photographed heMazzuccor in Greece and Jamaica). After shooting for the Calzedonia brand, the model was its face in 2013, 2014 and 2015. At the same time, Sara was chosen for the cover of the April edition of Portuguese Vogue.

Sara Sampaio’s primary goal was Victoria's Secret, the famous American women underwear company. The first attempt to get into the Fashion Show was not successful, and the model debuted at the show only in 2013. The same year, Sara appeared on the cover of the Portuguese GQ.

In 2014, Sports Illustrated magazine first invited a model from Portugal to a shooting. This model was Sara. The popularity of the girl grew with every new magazine edition.

The dream of becoming a Victoria's Secret Angel came true in 2015. Since that moment a new level in Sara's career ladder has begun. It was officially announced that Sara would be Victoria's Secret model. Fashion magazines offered her shooting and participation in their fashion shows. Her most recognizable work was the advertisement for Axe Effect, where she appeared in the image of an angel.

In 2016, Sara Sampaio and other show business stars gathered at one poker table. People fastened eyes on the star participants as legends of world football Neymar and Cristiano Ronaldo, the actor of the series Breaking Bad Aaron Paul, model Mireia Lalaguna and young actor John Boyega came to play poker.

The Poker Stars project is not a gamble but a significant charity event, although it was the high-level meeting. The guru of poker: Vanessa Selbst, Fatima Moreira de Melo, Andre Akkari, hosted the game.

After each game, a participant donated $ 5,000 to Right to Play and Save the Children funds. People can see the exciting paired board poker play on YouTube.

In 2017, Sara Sampaio was named the most popular model of Victoria's Secret angels, based on the number of subscribers on Instagram. The model daily posts photos, showing a perfect body, also in a bikini. Sara shares secrets of beauty in many interviews, encouraging fans to eat healthy food and do sports.

However, there are rumors about plastic surgery. Some sources publish information that Victoria's Secret star was on the catwalk of the leading American company thanks to plastic surgery. They say that the young woman had chin surgery.

There are no confirmations and contradictions of the information. However, after some remarks by the media in 2014, Sara had to prove that she loved her body. Sampaio said she dreamt of being like supermodel Candice Swanepoel. Journalists interpreted this statement in their own way, which led to a small conflict.

2017 was marked by another significant work with the famous photographer, Xavi Gordo. Sara presented the Pinko clothing autumn collection. Representatives of the company admit that they have not doubted the choice of the model because Sampaio has a natural beauty and she looks fascinating in photos even without cosmetics.

Nowadays, Sara Sampaio is believed to be one of the most popular and recognizable models. Agencies dream of working with Victoria's Secret angel and girls want to look like her.

Fans know about three Sara Sampaio’s love affairs. In 2015, the paparazzi repeatedly published photos of the model with the participant of One Direction, Harry Styles. The star couple caused a storm of discussions among fans and in the media, but none of the celebrities officially confirmed the romantic relationship.

Harry and Sara’s photos excited the Internet users for several months, but the story ended only with pictures and rumors.

Later, all Western news outlets discussed the date of the “angel” with singer Nick Jonas. Journalists photographed the young people while they were in bowling. In the photos, the couple looked happy, but there were no further details of the relationship between the singer and the model.

In 2017, Sara Sampaio appeared at the Cannes Film Festival with her boyfriend Oliver Ripley, owner of the company Ocean Group. The press became aware that in January the businessman made her a proposal. Sara and Oliver do not tell reporters about the date of the upcoming wedding and other plans for the future.

Sara Sampaio was a guest of the event and impressed the guests with a mini-dress. The black latex gown flattered the model’s figure and showed long slender legs. Sara had a high ponytail and bright evening make-up. 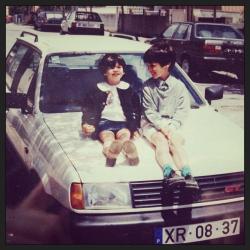