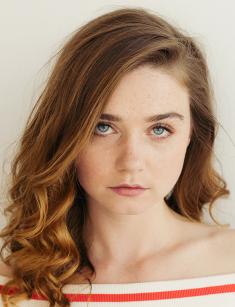 The British actress Jessica Barden is known to the broad audience for her roles in the anti-utopia The Lobster, the TV series The End of the F***ing World, and Coronation Street, the longest soap opera in the United Kingdom.

The would-be celebrity was born in July 1992 in Northallerton, the capital of New Yorkshire. In 1995, Jessica’s family moved to Wetherby, West Yorkshire; the girl spent her childhood there and attended Wetherby High School. There is little information about the artist’s parents; judging by the pictures from social networks, she has a brother, Josh.

In 1999, when Jessica was a school student, she appeared in an episode of the children’s TV series My Parents Are Aliens. It was a story about three orphans adopted by aliens from the planet Valux. Later on, Jessica had some minor roles in Coronation Street (a member of the Morton family) and the comedy No Angels.

The young actress continued with secondary roles in the sitcom Chickens and the crime drama Vera, the screen adaptation of Sadie Jones’s novel The Outcast that won Costa Book Award.

Jessica debuted on the big screen with the movie Mrs. Ratcliffe's Revolution. It is the comedy about the family that follows the socialist father’s will and leaves England for the German Democratic Republic; the mother secretly plans to come back. Barden gained the role of the daughter, Mary.

2009 brought the theater debut in Jerusalem staged by the Royal Court Theatre. Soon, the director Stephen Frears offered the young talent the role of the school student Jody Long in Tamara Drewe. Jessica personified an inhabitant of the English village that breaks into the main character’s house with her friend and interferes with her personal life by sending e-mails; eventually, many people’s lives change.

The next year, the actress appeared in Joe Wright’s action movie Hanna starring Cate Blanchett and Saoirse Ronan. Jessica played a teenage girl, Sophie; the main character meets her parents when she is looking for her father.

Further on, the actress received the lead role in the horror Comedown that showed the upcoming future of our planet. As the story runs, six teenagers enter the tower where a pirate radio station is located; some unknown maniac begins to hunt them.

Jessica played another troubled teenager in the drama In the Dark Half. Her character is searching for the borders between reality and imagination after the neighbors’ child dies; she used to look after him.

2014 was marked with the independent project Lullaby and played Meredith. This drama portrays a difficult moment of choice that a gravely ill person has to make: whether to continue the treatment or stop all the pain and the family’s anguish. The man’s wife and children accompany him; soon, the brother and sister appear and start remembering the past grudges. The daughter wants to obtain a court order and prohibit her father’s euthanasia. The movie starred Richard Jenkins, Anne Archer, and Amy Adams.

Jessica participated in the screen version of Thomas Hardy’s novel, Far from the Madding Crowd. The project won Golden Trailer Awards and had several nominations including London Critics Circle Film Awards and the Satellite Awards.

The same year, Barden appeared as the main character in the fantastic melodrama The Lobster with Colin Farrell, one of “the most beautiful men in the world” according to People, and the winner of the Academy Awards Rachel Weisz. By the way, Farrell was nominated for the Golden Globe for his work in the movie.

The story is set in the anti-utopian society where single people are punished: everybody has to have a partner, and those who do not agree transform into animals. The main character is convinced that similarity is the primary criterion for making a couple. Single people live in a hotel, and each of them has some peculiarities that make them stand out of the crowd. Barden played the woman whose nose is sometimes bleeding.

In 2016, Jessica joined the cast of the detective comedy Mindhorn about a forgotten actor who comes back to his stage type after the crimes in his native town.

Young Jessica does not seem to be particularly interested in finding a partner: the developing career is more significant for the woman.

Apart from cinematography, Barden shoots for glossy magazines and participates in social events. The actress likes to spend time with her friends; she has a great sense of humor.

The outcast Alyssa in the Netflix series The End of the F***ing World is the actress’s recent role; once again, she plays a teenager. It is the story about the young woman who is looking for her father and her companion, James (Alex Lawther), the self-proclaimed psychopath obsessed with the idea of killing a human being. Pushed out from their homes, the young people, who remind of Bonnie and Clyde, are going for new adventures.

The series combines black comedy and road movie elements, violence and romanticism; it is full of the foul language that gives a peculiar emotional coloring. Although the first season contained only eight episodes, it quickly became popular among the youth; it was called the hymn of young rebels and the best British series of the 21st century.

The dramatic plot is based on the characters’ family issues; they misshaped the children’s mental state. Perhaps, Jessica posted many links to the sources that help troubled children and parents on her Instagram page for this reason.

Some critics believe that a happy end is hardly possible in this story, and all the twists only confirm the idea. Each episode leaves the audience in suspense and gives much food for thought.

In 2018, the drama The New Romantic was premiered; Barden gained the lead role of Blake, the student who tried to settle her private life. She dates her college mates but fails and switches to more adult men without analyzing the causes of her previous break-ups with peers.