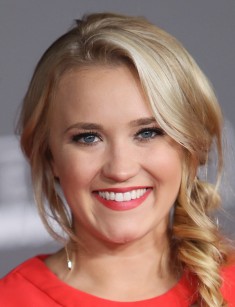 Emily Jordan Osment is an American actress, who became popular among children and adults. Her acting talent breathed life into all of her characters. And although Osment is still very young, it should be noted that there are many memorable roles in her career.

The future star was born on March 10, 1992, in Los Angeles. The girl's mother is an English school teacher. And her father, Michael Eugene Osment, is a famous actor. Since childhood, Emily was interested in acting. The girl’s brother, Haley Joel Osment, played an important role in the choice of profession. He is also an actor, who is famous for the films "Forrest Gump," "The Sixth Sense" and others.

It is also known that Emily Osment homeschooled and had tutors in order to spend more time for developing acting skills.

Emily Osment first appeared on the set in 1998. She starred in commercials. However, this work was also an excellent experience for the beginning actress.

The talented girl was noticed. Emily Osment got the role in the film “The Secret Life of Girls." And a year later, she appeared in the series "Sarah, Plain And Tall: Winter's End." In both films, she played secondary roles. However, Emily Osment was nominated for TheYoung Artist Award.

After this, Emily Osment got more serious roles. Firstly, the girl starred in few series such as "3rd Rock from the Sun", "Friends," "Touched by an Angel." And in 2002, Emily starred in the film "Spy Kids 2: The Island of Lost Dreams." Here Osment played the role of Gerti Giggles. A year later the heroine returned to the screens in the movie "Spy Kids 3: Game Over".

Emily Osment in the role of Gerti Giggles is often compared to Tom Felton (who played Draco Malfoy in “Harry Potter”). A lot of jokes appeared because of their resemblance.

Both children and adults loved the fantastic film about the children of spies, who constantly fall into stressful situations, save their parents and the world from destruction. Emily Osment’s first fans appeared. The films collected an impressive amount at the box office. In these films, the actress worked along with Antonio Banderas, Salma Hayek and Alexa Vega.

Emily Osment became popular after getting the role of Lilly Truscott in the television series of Walt Disney's studio "Hannah Montana". She played along with Miley Cyrus, Mitchel Musso, Jason Earles. The series tells about the life of a simple girl who goes to school in the afternoon, and in the evening becomes a famous singer Hannah Montana. The role of Hannah's friend brought Emily Osment another nomination for the Young Artist Award.

In 2007, the actress starred in the film "The Haunting Hour: Don't Think About It," as well as in "Shorty McShorts’ Shorts." The following year, Emily Osment was invited to the role in the movie "Soccer Mom." And a year later, the actress appeared in the comic film "Dadnapped" with David Henrie, Denzel Whitaker, George Newbern. Also, in 2009, "Hannah Montana: The Movie" was released.

In addition to acting, Emily Osment participated in the voicing of various projects. For example, the actress voiced characters in such cartoons as "Holidaze: The Christmas That Almost Didn't Happen," "Difficult Christmas Love," "Lilo & Stitch 2: Stitch Has a Glitch," etc.

In 2014, Emily began to star in the series "Young & Hungry." The girl played the main role of a cook Gabi Diamond, works at the house of a wealthy businessman. The girl constantly gets to interesting situations but always solves the problems. Here, Emily along with Jonathan Sadowski, Aimee Carrero, Kym Whitley and Rex Lee.

In parallel with the shooting Emily worked on musical projects. The actress sang in a duet with Billy Ray Cyrus (actor, singer, and father of Miley Cyrus, known as Hannah Montana). Also, Emily sang the song "I Do Not Think About It," which became the soundtrack to the film "The Haunting Hour: Don't Think About It."

Songs of Emily Osment became no less popular than the roles of the actress. And already in 2008, in an interview, the girl admitted that she was working on recording the debut album. The album appeared in 2010 and was called "Fight or Flight." Emily defined the main genre of her songs as pop with elements of alternative rock.

The actress tries not to show her personal life (the growth of Emily Osment - 1.59, and weight - 55 kg), so journalists and fans can only guess whether she has a boyfriend or not. It is only known that some time ago Emily had a serious relationship, which inspired her to write most of the songs.

The actress prefers to spend her free time with friends - Miley Cyrus and Mitchell Musso, with whom the girl became close after starring in "Hannah Montana."

Now Emily Osment continues to star in the series "Young and Hungry." In spring 2017, the first part of the fifth season was released, the sequel was announced for the beginning of 2018.

Fans also follow the star on the “Instagram,” where the girl posts photos from the shooting process, from everyday life. 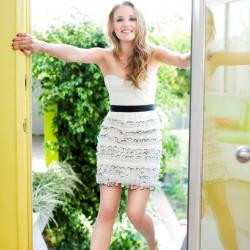