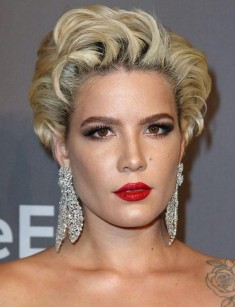 Halsey is a singer with the fabulous story of success. She is such a surprising, bright and frank person. Her admirers call their favorite singer the best voice of the generation as she sings in a simple language about the things that are meaningful for her. She speaks and sings sincerely about it.

The singer had taken herself a creative pseudonym from the name of the metro station. Halsey was born in September 1994 in Edison, New Jersey. Her mother Nichole and her father Chris Frangipane called their elder daughter Ashley Nicolette. Later two sons Sevian and Dante were born in this family.

But the biography of the future pop star wasn’t ideal. The guy who was her first love wasn't accepted by her parents. Halsey was left without money and a roof over her head. She was moving back and forth to the apartments of her friends and acquaintances. At that time she earned only with the help of her street concerts. According to some American websites, the girl refused to study at the college as the obtained grant wasn't even enough to pay a full course.

Despite all the difficulties, Ashley graduated from Warren Hills Regional High School in Washington. She also managed to learn some skills in music – she had learned to play the viola, the violin, and the cello. However, the girl had given preference to the acoustic guitar. The parents had influenced the musical tastes of the girl. Her father liked Tupac Shakur and Slick Rick, her mother was a fan of "Nirvana" and "Gin Blossoms".

In her interview, Halsey said that she had had bipolar disorder. By her words, music became means of communication and a form of therapy for her. She began to compose songs at the age of 17 and she posted her works on the web. The "Ghost" which she devoted to her friends was heard by five sound recording studios at once. All of them offered the contract to the young talented singer. Having taken the conditions into consideration, the singer had chosen the most democratic conditions of "Astralwerks" label. By the statement of the studio, Ashley is a star, and her music is phenomenal.

In 2014 Halsey released her album "Room 93" which contained five compositions. The result turned out to be controversial: this CD had hardly got to Billboard 200 rate in the USA and at the same time had taken the 3rd place in Top Heatseekers rating of made by the same publishing house.

Halsey achieved her success with the second full-scale album "Badlands" which had taken the second position in the same TOP 200 chart and became platinum on the sales volumes. The singles "Castle", "New Americana" and "Colors" were included to this album. The first one became a soundtrack to the movie "The Huntsman: Winter's War". The last song was addressed to Matt Healy, the soloist of "The 1975" group. By that time their love affair had come to an end.

The name of the album had come to Ashley’s mind in her dream and reflected her state of being and perception of the surrounding. The singer admitted that after the completion of the work she felt something, similar to postpartum depression.

The new star received the invitation from Justin Bieber to record a track for his new album called "Purpose". "The Feeling" song became a result of their joint creativity. This song was included to the fourth ten of Billboard Hot 100 rating long before its official release.

In 2016 singer’s fans heard the single "Closer" which was the result of the collaboration of Halsey and "The Chainsmokers". The song had been at the top of Billboard Hot 100 rating for 12 weeks and entered the five of the best compositions for half a year.

A year later the singer took part in the recording of the header song under the title "Don't Take The Money" from the album of American indie pop band "Bleachers". The "Atwood" magazine characterized this single as epic, cheering pop-rock anthem of love.

Halsey doesn't lack men attention. With a height of 163 cm, she weighs a little bit more than 50 kilos. Her body is decorated with the tattoos and piercing. Halsey was said to have love affairs with the soloist of the indie-rock band - Matt Healy and the musician Joshua Dun. Jared Leto and the participant of the American "The Chainsmokers" duet Andrew Taggart were also enchanted by a charismatic and bright girl. There were rumors that business relations with the Norwegian performer and producer Lido were combined with the romantic relationship.

This was so despite the statement of Halsey that she was bisexual and supported the rights of LGBT community.

In 2017 media captured the actress at the after party of Yves Saint Laurent Fashion House in a company of the rapper Gerald Earl Gillum who is known by the pseudonym of "G-Eazy". Their outspoken and liberated behavior had made it clear that they had close and strong relations.

Halsey's fans had even more affirmed in their guesses when G-Easy arrived at Brooklyn Barclays Center to her concert. The couple sang a new hit of the rapper "No Limit". They exchanged tender looks and kisses. Without a trace of embarrassment the singer addressed Gillum as "my boo boo", and Gerald, in turn, called Ashley "the most beautiful girl in the world".

The musicians recorded their joint single and the song video called "Him and I" which, by the hearsay, was planned to be performed by the ex-girlfriend of G-Eazy - Lana del Rey. This song was included into the fifth long play of Gerald under the title "The Beautiful & Damned".

The singer is a fan of Larry Clark and Quentin Tarantino. Among musicians, she prefers "Brand New", "One Direction" and Amy Winehouse.

In 2017 the singer released her second studio album entitled "Hopeless Fountain Kingdom" with the songs "Alone", "Bad at Love" and 14 more tracks. The album quickly got to the very top at iTunes about what the actress hurried to report on her Instagram page. As well as in her first album, the album "Hopeless" has a profound meaning. It’s worth considering the fact that parting with her ex-boyfriend Lido had inspired her for composing this album.

The hit "Bad at Love" had settled on the 5th position in Billboard TOP 100 songs. Halsey chose her song called "Alone" for her debut on the British television. The video was shot by the owner of MTV Video Music Award - Hannah Lux Davis, the music video director of Nicki Minaj, Demi Lovato, and Miley Cyrus.

At the beginning of 2018, the name of Halsey appeared on the pages of newspapers after the emotional and profound performance during Women's march dated for the action which received the tag #MeToo on the web. The singer made the speech devoted to harassment problems at the protest meeting of the activists. Eva Longoria, Adele, and Mila Kunis were noticed among the marchers.

Halsey is planning to spend the summer of 2018 working. Her tour "Hopeless Fountain Kingdom World Tour" will pass through Canada, Brazil, Europe, Singapore, and the Philippines. Besides, the singer and Sony Pictures company had come to preliminary arrangements on the terms of the contract for the shootings of the movie about the singer's life. 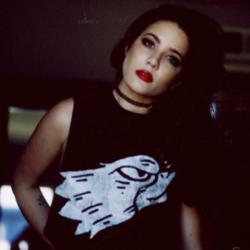