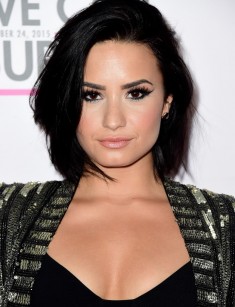 Demetria Devonne Lovato - so sounds the full name of the American movie star and singer Demi Lovato. The actress participated in the sitcoms of the "Disney" studio. Also, she recorded several studio albums.

Demi was born in August 1992, in Dallas. Her childhood wasn’t easy. Parents divorced when the youngest daughter was two years old. Demi stayed with her mother and elder sister Dallas. She does not remember her father. After the divorce, he moved to his native Mexico.

Because of the family problems, the girl grew up as an extremely vulnerable child. Demi did not know how to stand up for herself and was a victim of bullying and gossip of classmates. Lovato experienced the cruelty of children so painfully that she even thought about suicide. Her mother had to homeschool her younger daughter.

The girl was talented and had a beautiful voice. At the age of 7, Demi learned to play the piano, and several years later she learned to play the guitar. When Demi Lovato was a teenager, she understood that she had acting talent. So the star decided to learn the basics of acting. She graduated from the high school earlier.

Demi loved music and singing more, but she became famous after appearing on the screen. The cinematographic biography of Demi Lovato began with the popular children's film "Barney & Friends." On the set of this project, the young actress found her best friend, Selena Gomez.

The 2006 year was successful for the American star. She was offered to play in one of the series of the cult "Prison Break." The actress starred along with such popular Hollywood actors as Dominic Purcell and Wentworth Miller. The success of the series also affected the popularity of the actors. From this moment the film career of Lovato was closely connected with "Disney."

Soon the producers of the company invited the actress to star in "As the Bell Rings" and "Camp." Demi Lovato got the main role in the last film. She demonstrated not only brilliant acting skills. Her soundtracks, especially the song "This Is Me" feat. Joe Jonas made the young actress famous.

Demi Lovato and Selena Gomez met again in the film "Princess Protection Program." Lovato played Princess Rosalinda, and Gomez was an American girl Carter, whose father worked in the secret Princess Protection Company. Both actresses were stars at the time of the release of the family film. Not surprisingly, the film turned into a real bestseller, which was seen by more than 8 million people. In this film, Lovato sang one of her best songs "One and the Same."

In February 2009, there was a long-awaited premiere of the 5th season of the series "Sonny with a Chance," in which the charming American star played along with Tiffany Thornton, Allisyn Ashley Arm, and Sterling Knight. In the sitcom, Demi played the role of a girl Sonny, the newest cast member of the show-within-a-show So Random! The film was broadcast in 52 countries and brought Demi Lovato the international popularity. The actress had a psychological crisis and went to rehab. After that, Demi left the series.

And in summer of next year, the second season of the series "Camp Rock" was released, in which Demi played the role of Mitchie Torres. 8 million people watched it.

Later the actress appeared in the musical film "Glee." The series won two "Golden Globes" and many nominations of prestigious awards. The next project in the filmography of the actress was the movie "Matador," where Demi starred in an episode at a party. And in 2015, the series "From Dusk Till Dawn" with the participation of Lovato in the role of Maia, was released. It also received positive reviews. The work in this film brought the actress a new experience, as previously Demi Lovato had never acted in horror films.

The creative biography of Demi Lovato as an independent singer began with her performance at the concert of the popular boy band "Jonas Brothers." The girl opened for the band and was immediately noticed.

Soon the debut solo disk of the singer under the name "Do not Forget" was released. It was highly appreciated by music critics. They were shocked by the quality of the album, recorded in just ten days.

The next albums of Demi Lovato "Here We Go Again," "Unbroken" and “DEMI” were also popular and were sold out very fast. It is noteworthy that in Mexico, in the homeland of the girl's father, her albums were more popular than in the US.

She was invited as a jury member to the popular X-Factor TV show, in which the singer took a seat next to Britney Spears, L.A. Reid, and Simon Cowell.

In autumn 2015, Demi’s new album "Confident" was released. Its promo-single was a soul ballad "Stone Cold" ("Stone Cold"). The song "Cool for Summer" was also included to the album. It became a hit and entered into a repertoire of nightclubs around the world. Soon a video for the song was released.

In early 2017, Demi announced that she takes a break in her musical career because of an unstable psychological state. The singer told that she was not created for show business and sounded rather pessimistic. Demi Lovato switched to charity. This activity inspired the girl, and she again wanted to create.

Soon the singer announced the upcoming sixth album, which was called "Tell Me You Love Me." The actress posted promo videos on "Twitter." Since the mid-summer, such singles as "You Do not Do It For Me Anymore," "Sorry Not Sorry," "Sexy Dirty Love." After the release, the album became the most financially successful record in the musical career of Lovato. The album topped charts of the UK, Australia, USA.

Despite the incredible charm and stellar status, Demi’s personal life is not perfect. She had relations with the brother of Miley Cyrus, the guitarist Trace Cyrus. But they broke up because of the busy working schedules.

In 2010, the star began dating the actor Joe Jonas, whom she met on the set of the film “Camp Rock.” Fans of the actress loved the beautiful couple. But soon there was a painful breakup, after which Lovato was diagnosed with bipolar disorder. The girl stayed in one of the Chicago clinics for three months.

Then Demi began relations with a guy who everyone thought was a singing gigolo. The girl met the actor Wilmer Valderrama on the set of the film "From Dusk Till Dawn." On the actor's account, there were already relations with Mandy Moore and Lindsay Lohan. Nevertheless, the young people were together for five years. In 2016, Lovato and Valderrama broke up. Fortunately, this separation was easy.

In late autumn 2016, the girl was noticed with the ex-boyfriend of Katy Perry, John Mayer. The couple went to one of the New York popular nightclubs.

However, in early 2018, Demi began the relationship with Wilmer Valderrama again, with whom she broke up two years earlier. The lovers were noticed on vacation in the restaurant Sol y Luna in Los Angeles. Nevertheless, Demi tries not to comment the details of her personal life. There are no joint photos with Wilmer on her Instagram.

Now Demi Lovato continues to develop cinematographic and musical careers. The girl participates in voicing "The Smurfs," where Smurfette speaks her voice. Also, Demi Lovato has again signed a contract with the producers of the series "Camp Rock."

In 2017, a video for the song in the Latin style "Echame La Culpa," which Demi Lovato sang along with the star of the Latin American stage, Luis Fonsi, was released. The official video in less than half a year reached more than 1 billion views.

In 2018, Demi recorded a song with Christina Aguilera for her studio album, which will be released in the second half of the year. 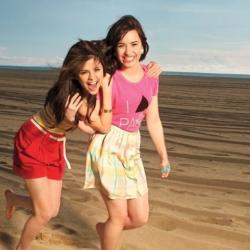