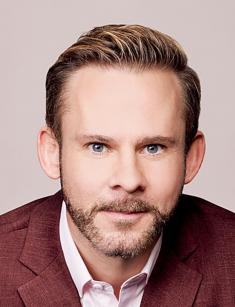 Two or three movies can be identified in the career of most actors that made them famous. Someone manages to jump over the bar and some of them don't try, they are content with what they have. The English actor of theater, film and television Dominic Monaghan is famous for his participation in the movies The Lord of the Rings and Lost.

The future actor was born on December 8, 1976, in the family of the teacher of English language and literature Austin and the nurse Maureen. It happened in Berlin, where Austin worked under contract.

By that time, the young couple already had one child the son Matthew, so Dominic Bernard Patrick Luke Monaghan (this is the full name of the honored hobbit of Great Britain) was their second and last child. In 1988, the Monaghan family moved to Manchester (England).

Dominic grew up a typical boy of his time. He loved to walk, read comics, watch movies in theaters and listen to music. He even tried to learn how to play guitar and keyboards together with his elder brother but a new hobby forced him to give up music (unlike Matthew, who is currently a popular singer and musician). This new hobby was acting.

The film Star Wars encouraged the boy to go to the theater circle, Monaghan wanted to be like Luke Skywalker and Han Solo. However, he had to take part in productions of Oliver Twist, A Christmas Carol, as well as biblical scenes (because he studied in Catholic school).

His father bet him that he will not have time to read The Lord of the Rings for six months. The boy, reading a fantasy epic in just two months. He fell in love with this work at the same time, promising to play in his production one day. He didn't even know how prophetic his words would be.

Dominic goes to college after school. The guy understands that his financial situation is far from ideal, studying English literature, drama and geography, so he gets a job first as a mail sorter and then a realtor and a waiter.

In 1994, Monaghan managed to get a job in the local youth theater. Dominic was noticed by a producer at the BBC after the first performances and was invited to the role of a petty thief, the assistant to the main female character in the series Hetty Wainthropp Investigates. Monaghan agrees. He plays the role of Geoffrey's thief for the next three years.

Dominic made his film debut in 1997. This movie was a television thriller Hostile Waters, in which Rutger Hauer, Martin Sheen, Max von Sydow had the main roles. It was a severe experience for a young actor.

In 1999, the shooting of the mini-series Monsignor Renard began. Monaghan played the role of a character named Etienne Pierre Rollinger. Peter Jackson saw him in this role, selecting actors for his upcoming production of The Lord of the Rings.

Peter liked the game of the actor and he invited the actor. When Dominic realized where he was invited, he couldn't believe his ears. He was full of delight until he found out that he would not get the main role and he got the role of Meriadoc, a friend of Frodo Baggins. The actor did not regret anything by the end of filming.

"I have found the closest friends I have ever had. We spent almost two years shooting with these people. We have become not just friends but brothers during this time. Our friendship is for life," Dominic said in an interview.

These words confirm the fact that the participants of this movie made a real tattoo in the form of a stylized elven letter of 9 numbers (the number of members of the brotherhood).

The role of the hobbit glorified the actor all over the world. He had a lot of offers from different companies. Dominic chose the next, wrong project Spivs in 2004. Nobody remembers about this movie, in contrast to the film Cleaners, which was filmed in the same year.

His chose a new project Lost. Dominic comes to the casting to try a role and gets the other role, the role of the rocker Charlie Pace. In 2005, The actor was nominated for Best Supporting Actor for this role.

The actor decides to return to the widescreen after the death of his character in the third season (2008). The reason for the return was the offer of the director Gavin Hood and the screenwriter David Benioff to appear in another part of the franchise X-Men Origins: Wolverine. Dominic manages to star in the horror film I Sell the Dead before the premiere of this movie.

Monaghan decided to try the role of not only an actor but also a producer in the next film The Millionaire. His experience was successful and Dominic wanted to be a producer.

The actor continues to appear in films, acting in the series Chuck and FlashForward but not so intense. In 2016 and 2017, there films Pet and Atomica were released.

Dominic had a relationship with his partner on the set of the series Lost, a Canadian actress named Evangeline Lilly. In 2005, they announced their engagement but a couple decided to part a few years later. In 2008, they made another attempt to get together but it was unsuccessful, which upset fans of Dominic and Evangeline.

In 2010, Monaghan starred in the music video of Eminem and Rihanna for the song "Love the Way You Lie." The actress Megan Fox appeared in the video together with him. The media had thoughts about the relationship between the actor and the actress because of the plot of the clip but this information was immediately refuted.

It is unknown about the other relationships of the actor. In 2014 and 2015, there was often talk that Monaghan was gay. There was talk about his love to paint his nails and wear skirts (the photo, on which the actor looks this way can be found on «Instagram»). Dominic did not react to such remarks for two years but then announced that he was metrosexual, not gay.

Nowadays, the actor has fully devoted to the project Wild Things with Dominic Monaghan, as well as professional activities in London and Manchester. Besides, the actor hangs out at the recording studio, which belongs to Elijah Wood and Dominic. Dominic works with his brother and other performers. Dominic Monaghan has a net worth of $12 million.

On October 10-19, 2017, Monaghan will host the festival "Screamfest," dedicated to horror films (this festival will premiere the prequel Texas Chainsaw Massacre). The actor Sean Astin will work with him.