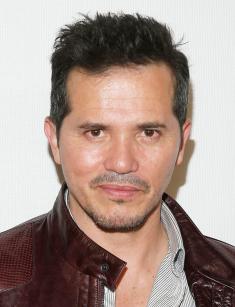 Fast-talking and feisty-looking John Leguizamo has continued to impress movie audiences with his versatility. He can play sensitive and naive young men, such as Johnny in Hangin' with the Homeboys (1991), cold-blooded killers, as Benny Blanco in Carlito's Way (1993), extravagant comedic characters, like Luigi in Super Mario Bros. (1993), and even distinguished historical figures, as Henri de Toulouse-Lautrec in Moulin Rouge! (2001). His numerous awards can also confirm it. John Leguizamo played in dozens of pictures; in addition, he is known as a theater actor, dancer, singer, and producer.

Leguizamo was born on July 22, 1964, in Bogotá, Colombia, the son of Alberto and Luz Leguizamo. His father was once an aspiring film director and studied at Cinecittà, but eventually dropped out due to lack of finances. According to Leguizamo, his paternal grandfather was of Italian and Puerto Rican descent, and his maternal grandmother was Lebanese. He has also described himself as being of Amerindian and Mestizo heritage. On June 10, 2011, Leguizamo's father declared in an interview with New York Hispanic newspaper El Diario that he is Colombian and not Puerto Rican and that Leguizamo is therefore not half Puerto Rican as he has always stated.

When Leguizamo was four years old, his family immigrated to New York City, USA, where they lived in various neighborhoods in Queens, including multicultural neighborhood Jackson Heights, where migrants from Asia and Latin America settled a long time ago.

He later credited growing up as one of the first Latino children in the neighborhood as formative in his acting ability:

“It was tough. There were lots of fights. I would walk through a park and be attacked, and I had to defend myself all the time. But this helped me to become funny so that I wouldn't get hit.”

Leguizamo attended the Joseph Pulitzer Middle School and later the Murry Bergtraum High School. As a student at Murry Bergtraum, he wrote comedy material and tested it on his classmates. He was voted “Most Talkative” by his classmates. After graduating from high school, he began his theater career as an undergraduate at NYU's Tisch School of the Arts, from which he eventually dropped out in favor of a career in stand-up comedy. Post-NYU, Leguizamo enrolled at LIU Post and at HB Studio, where he took theater classes.

Leguizamo started as a stand-up comic doing the New York nightclub circuit in 1984. He made his television debut in 1986 with a small part in an episode of crime drama series Miami Vice. His other early roles include Mixed Blood (1985), Casualties of War (1989) and so on.

Leguizamo received several films offers in the 90s, and the notable and successful one was coming-of-age comedy-drama Hangin' with the Homeboys in 1991. The same year, he hit the stage with his show John Leguizamo: Mambo Mouth, in which he portrayed seven different Latino characters. The witty and incisive show was a smash hit, which received positive reviews from, and later was filmed for HBO. Since that time, John Leguizamo often acts as a showman with his performance in New York and Chicago.

In the middle of the 90s, the actor had his best prominent roles. In 1995, an outstanding comedy To Wong Foo, Thanks for Everything! Julie Newmar was released where Leguizamo alongside Wesley Snipes and Patrick Swayze played three New York City's drag queens (the performance artists, almost always male, who dress in women's clothing) who won a trip to Hollywood to take part in the even bigger contest.

In 1996, John’s role of Tybalt Capulet in Oscar-nominated movie Romeo + Juliet in opposite Leonardo DiCaprio and Claire Danes also earned him critical and commercial success. Next year, he starred as the fantastical role of Violator, the inner demon- antagonist, in a superhero thriller film Spawn based on the comic book character of the same name.

In 1999, John Leguizamo played an essential role as Vinny in crime thriller movie Summer of Sam directed and co-produced by Spike Lee. The film is based on a real-life story of the 1977 David Berkowitz's serial murders and their effect on a group of fictional residents of an Italian-American neighborhood in The Bronx in the late 1970s.

At the beginning of the new century, the actor had a supporting role in the 2001 film Moulin Rouge!, where John starred alongside Ewan McGregor and Nicole Kidman. Due to the part of famous French artist Henri de Toulouse-Lautrec, John was nominated for Screen Actors Guild Award.

2000 was a hectic year for the actor's career. Besides acting in the movies, John Leguizamo also succeed in a voice working as Sid the Sloth for the film Ice Age, reprising the role for the sequels Ice Age: The Meltdown, Ice Age: Dawn of the Dinosaurs, Ice Age: Continental Drift and Ice Age: Collision Course. The actor appeared more often on screens: from 2000 to 2004 in the sitcom The Brothers García, and in 2005, he joined the cast of the medical drama television series ER as charismatic Dr. Victor Clemente.

However, as the actor admits, his vocation does not include only cash blockbusters:

"I love independent films; it is the only place as an actor; you are totally allowed to breathe. You are not following the plot, or the next action beat, or promoting some big dumb movie. Independent film is for actors that love to act. There is more interesting storytelling. It is not about a paycheck; that's for damn sure."

In 2014, Leguizamo featured in action thriller movie John Wick as Aurelio Martino, the owner of a high-end chop shop. His character also appeared in a sequel, John Wick: Chapter 2 in 2017. John Wick (Keanu Reeves) is a former hitman who returns to the criminal underworld when a Russian gangster steals his car and kills his dog.

Leguizamo married at the first time actress Yelba Osorio in 1994. They divorced in 1996 after two years of marriage.

“Marriage is wild. I thought it was this perfect land of happiness and joy. Wrong!” – said John.

John Leguizamo was a bachelor for a long time, protecting his personal life from the paparazzi until he met Justin Maurer, the residential agent. She was a Jewish origin, and he was a Catholic, but even though, they held a Catholic-Jewish marriage ceremony on June 28, 2003.

They have two children, daughter Allegra Sky Leguizamo (born 1999) and son Ryder Lee "Lucas" Leguizamo (born 2000). Now the happy family lives in Manhattan, New York. We cannot see the family photos because John Leguizamo does not have an account on Instagram; his personal life is behind the scenes.

In 2018, John Leguizamo received an Honorary Degree from Marymount Manhattan College. The same year, he was nominated for Emmy Award for his role in TV miniseries Waco.

Leguizamo also would cast in the third movie of thriller John Wick: Chapter 3 – Parabellum, which was planned to release in 2019. Despite its picture, the actor will appear in such projects as El Patron, Banana Republic, and many others.

John Leguizamo has a net worth estimated at $25 million.