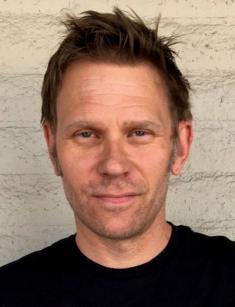 Mark Pellegrino is one of the leading actors of the series Supernatural; his Lucifer turned into a loyal son of God who woke compassion in the audience. Although Mark has few significant roles, his natural charisma makes him stand out among other artists.

Mark Ross Pellegrino was born on April 9, 1965 in Los Angeles, California. There are many gaps in his life history: the school where the boy studied or the parents’ identity remain unknown.

Young Mark was going to become a marine biologist and study underwater life forms. He entered a field-specific college and proved to be an excellent student; however, he felt no attraction to education and dropped eventually. The diligent student transformed into a badass punk; the would-be actor used to sing in some rock group.

The parents were not involved in their son’s spiritual education. At the age of 20, Mark went to church voluntarily and was baptized. Today, Pellegrino identifies himself as an atheist; he supports objectivism, the philosophy created by the Russian-American writer Ayn Rand in the novels The Fountainhead and Atlas Shrugged.

Mark became an actor by accident; his curiosity also contributed to that decision. One day, Pellegrino appeared in a commercial for fun; some producer emphasized his natural talent. By that time, the young man had quitted marine studies and failed to find a job to his liking; he tried himself in art.

Mark hired an agent and received a list of acting schools. The pragmatic American preferred an inexpensive option not far from home; it was the right choice. In 1987, he participated in L.A. Law. The first years also brought No Holds Barred starring Hulk Hogan, Doogie Howser, M.D., and Prayer of the Rollerboys. In 1990, Pellegrino gained an episodic role in the police series Hunter and participated in Tales from the Crypt. Two years later, the beginning artist joined the cast of Lethal Weapon 3.

All these roles were secondary; Mark played villains. The actor gave everything to his characters as if they were the lead ones. For instance, the criminal Blond Treehorn Thug in The Big Lebowski (1998) was as bright as Jeff Bridges’s and John Goodman’s characters.

Mark had to wait for his glory hour for a long time. He collaborated with David Lynch in Mulholland Drive (2001), the master of thrillers William Friedkin in The Hunted (2003), and Joel Schumacher in The Number 23 (2007). Finally, 2009 brought the long-awaited fame: Pellegrino received the roles in two series, Lost and Supernatural.

The series Lost gave the actor the role of Jacob, the leader of the Others and the great man according to one of the characters, Benjamin Linus. He appeared in his human form once, in the last episode of the fifth season (“The Incident”). Later, Jacob was pictured in the sixth season as a ghost and in memories (episode nine “Ab Aeterno” and episode 15 “Across the Sea”). In 2010, Mark was nominated for Saturn Award – Best Guest Performance in a Television Series Lost/

The leader of the Others had outstanding abilities: immortality (apparently, it was fictious), omniscience, and changing people’s fates according to the desire of the island. Working on the almost almighty figure helped Mark Pellegrino prepare for the role of Lucifer in the series Supernatural.

Initially, the artist auditioned for the role of Castiel; he was one of the primary candidates, but Misha Collins took the role in the end. Mark had already said good-bye to the project, but the series creators offered him the role of Satan. Today, Pellegrino and Collins are close friends; Misha posts some photos with Mark on his Instagram page.

Pellegrino debuted in the episode “Sympathy for the Devil”. The Winchester brothers, Sam (Jared Padalecki) and Dean (Jensen Ackles), break the last out of 66 seals and set Lucifer free. He takes the body of Nick, the man who lost his wife and daughter and lives in a nightmare.

Pellegrino collaborated with Padalecki more often: Sam became the vessel for Lucifer. The struggle continues throughout the whole fifth season and reaches its peak in the final episode. The devil rises in the first episode of the seventh season; Sam remembers the time he spent in the hell cage.

Since the episode “Between Heaven and Hell”, Mark Pellegrino has been the regular member of the cast. As the devil’s successor, Jack (Alexander Calvert) appears, the story goes on.

In the last episode of the 13th season (“Let the Good Times Roll”), Archangel Michael in Dean’s body defeats Lucifer. The 14th season was premiered in October 2018; Mark Pellegrino personified Nick, the vessel of the devil, and stopped being the lead character.

The artist worked on Supernatural and also extended his filmography by other projects. In 2012, he played Jarold Kampfer in the second season of the series Grimm. Jarold was the school friend of the main character, Hank Griffin, whose daughter was missing (the third episode “Bad Moon Rising”).

In 2017, Pellegrino appeared in the first season of the series 13 Reasons Why as Sheriff's Deputy Standall, Alex’s father.

On October 2008, Mark married the actress Tracy Aziz. The couple has two children from Tracy’s first marriage: the daughter Tess and the son Misha. Although the actor is an active user of Twitter, he does not write about his personal life there.

Stephen Amell, the star of the series Arrow, is related to Pellegrino; thanks to Mark who took him to a movie set one day, the young man became an actor. He liked the buzz, many cameras, and a lot of light there.

Mark keeps fit and practices martial arts: jujutsu, judo, karate, kickboxing. The man’s height is 6.07 ft. (185 cm.), and his weight is 209.44 lbs. (95 kg.). The actor is interested in politics and philosophy and calls himself a radical capitalist.

In 2019, the creators of Supernatural will continue to please fans with new episodes; Pellegrino may appear in some of them. The actor does not talk much about his future plans.