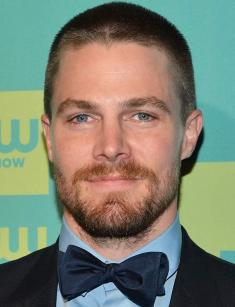 Stephen Amell is an American actor of the Canadian origin, amateur wrestler, and entrepreneur. He started his career with episodic roles in TV projects and gained his fame for the superhero series Arrow on The CW channel. Amell personified Oliver Queen, the superhero in a green hood who fights against injustice with his arrow and bow.

Stephen was born on May 8, 1981, into a wealthy Canadian family. The boy spent his early childhood in Toronto; later, he went to St. Andrew's College, a private school for boys, following his father’s decision: he believed that the mother’s upbringing spoiled his son.

Indeed, the life among boys changed Amell. The atmosphere was full of competition, and he did not want to be a mama’s boy. Stephen paid much attention to exercises, and the results revealed themselves soon: the teenager could boast a perfect body which helped him in his future career.

The would-be actor was a diligent student and entered a college easily; he combined his studies and work at an insurance company. The parents expected their son to become a businessman, and the young man’s life could have been entirely different if it had not been for his relative, Mark Pellegrino. One day, the star of Supernatural and Lost took his nephew to a movie set, and Stephen’s life changed dramatically.

Stephen was eager to become an artist and sent his photos to various agencies. However, he had no acting education and experience; episodes in second-rate series were his limit for a long time.

In 2004, Amell worked part-time as a spinning instructor. As soon as he learned about the auditions for the role of a spinning instructor in the series Queer as Folk, the young man decided to risk it and promised he would stop trying to become an actor if he failed. He succeeded.

The next TV appearance happened the next year: the actor participated in the series Dante's Cove targeted at the gay audience. In 2006, Amell received a small role in the TV movie The House Next Door, the thriller starring Lara Flynn Boyle from Twin Peaks. The same year, the young man began to work on the series Rent-a-Goalie; he appeared in 18 episodes.

2007 was significant in terms of work and personal life. Stephen Amell debuted in the first full-length movie, The Tracey Fragments, and won Gemini Awards – Best Performance by an Actor in a Guest Role Dramatic Series for the series ReGenesis. He also got the role in Closing the Ring with Christopher Plummer and Shirley MacLaine. On December 8, Amell married for the first time.

2009-2010 were marked with small roles in the movies Screamers: The Hunting, The Cutting Edge: Fire and Ice, and the series Flashpoint, CSI: Miami, Blue Mountain State, and NCIS: Los Angeles.

In 2011, the actor joined the cast of the series The Vampire Diaries, CSI: Crime Scene Investigation, New Girl, 90210. The role of the prostitute Hung was particularly notable.

2012 turned out to be the breakthrough year: Stephen appeared in seven episodes of Private Practice and got the lead role in the significant project, the series Arrow based on the DC comics. The main character, Oliver Queen, is a playboy millionaire who finds himself in an uninhabited island after a shipwreck. Five years later, he returns to his native Starling City as a completely different person. He chooses the path of fighting against injustice and becomes Green Arrow, the superhero with no superpowers.

There are several flashbacks in the series that tell the stories of how Queen got his tattoos and scars, how he mastered his archery skills, and so on. Emily Bett Rickards became the actor’s stage partner and played Felicity Smoak. As it often happens with comics screen adaptations, several spin-offs and crossovers of the project have been released; the series The Flash starring Grant Gustin is one of the most notable among them.

The artist did all the tricks on his own. Although the man is athletic and has perfect shapes (his weight is 180.78 lbs. or 82 kg., and his height is 6.07 ft. or 185 cm.), it was not enough; Amell had to take archery and martial arts classes. Considering that Stephen is fond of wrestling and even participated in several matches, it was pretty easy for him to train.

In 2016, Stephen worked as an executive producer in the movie Code 8; he also acted there along with his cousin Robbie Amell. The same year, the actor personified Casey Jones in Teenage Mutant Ninja Turtles: Out of the Shadows.

The actor had another chance to show his sports spirits in the charity episode of American Ninja Warrior on May 25, 2017. Amell dealt with many obstacles and earned $35 000 for those in need.

Stephen married his first wife, the Canadian Carolyn Lawrence, in 2007; they divorced in 2010. Two years later, the man married again: it was the actress Cassandra Jean whom he had seen in the TV series Mad Men. In 2013, the couple’s daughter, Maverick Alexandra, was born.

In 2013, the actor founded the company Nocking Point that produced and sold wine and coffee.

In 2015, Stephen Amell and the businessman James Frazier organized Heroes and Villains Fan Fest for fans of superhero universes. The first event took place in San Jose; later, fan meetings with comics creators and actors were held regularly. One of them happened in London.

The actor posts the news about his projects, particularly Arrow, on his Twitter and Instagram pages. Besides, he frequently shares the pictures of his daughter.

In the mid-August 2018, Amell posted a selfie where he had a gorgeous beard. The actor, who had not been a fan of this style, grew it for the new image of Oliver Queen: the superhero was imprisoned in the seventh season.