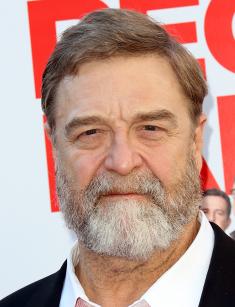 John Stephen Goodman is an actor of the American cinema, the winner of a Golden Globe for his role in the series Roseanne and the Emmy Award for his work in the film Studio 60 on the Sunset Strip.

John was born on 20 June 1952 in the village, located next to the independent city-state of Missouri St Louis. When he was a 2-year-old baby, he lost his father, who died of a heart attack. There were three children in the family – a 15-year-old son Leslie, John and newborn daughter Elizabeth. His mother Virginia had to get a job in several places. Leslie took care of his brother and became his support for many years.

As a child, John played for the school football team and worked in the theater studio. After graduating from the local school, the young man entered college in 1970. Not wanting to stay long in his hometown, John soon successfully passed the entrance exams to Missouri State University at the faculty of drama, in which actors Kathleen Turner, Tess Harper, Don S. Davis studied at different times.

In 1975, the Goodman family moved to New York, where John had to work on holiday events for children and act in advertising for the first time. In 1978, Goodman made his debut on the stage in the production of A Midsummer Night`s Dream by William Shakespeare. Soon the young artist was already involved in musicals on Broadway.

John first appeared on the movie screen in the crime thriller Chiefs in an episodic role in 1983. The artist lit up in the drama of Andrei Konchalovsky's Maria's Lovers with Nastassja Kinski in the main role a year later. In the second half of the 80s, Goodman appeared in episodes of the films Punchline, The Big Easy, True Stories. John turned into a Gale Snoats, a criminal, who escaped from prison in the film, Raising Arizona.

In 1988, Goodman received the main role in the comedy series Roseanne of Dan O'Connor, which was aired on the channel ABC for nine seasons. The sitcom took the first positions of ratings of the channel for six years. This film was included in the list of 50 best shows of all time in 2002. In 1993, John Goodman received the Golden Globe for best actor in the first plan in the series.

John Goodman gets into the main cast along with Richard Dreyfuss, Holly Hunter, Audrey Hepburn in Steven Spielberg`s sci-fi drama Always, which was released in 1989. The actor receives the main role in David S. Ward`s comedy King Ralph a year later, in which the main character, a showman and singer from Las Vegas, becomes the sole heir to the Royal crown. Musical abilities were useful to the actor later in the creation of the comedy Blues Brothers 2000, in which he got the role of singing barkeeper Mack McTeer.

In 1992, John Goodman got the main role of the film producer Lawrence in the comedy Matinee of Joe Dante. In 1994, the actor transformed into the head of the family, a resident of the stone age in the comedy The Flintstones. The film also featured Elizabeth Perkins, Kyle MacLachlan, Elizabeth Taylor, Halle Berry.

In 1998, John Goodman was invited to shoot in the crime comedy The Big Lebowski for the role of Walter Sobchak. In the late '90s, the actor starred in the horror film Fallen and in the thriller Outrageous Fortune. In 2000, the artist was featured in the musical comedy Coyote Ugly, in which the main roles were played by Piper Perabo, Tyra Banks, Maria Bello, Adam Garcia, Michael Bay. The film grossed $ 114 million.

John Goodman with Bryan Brown and Toni Collette reincarnated as a representative of the mafia in the movie Dirty Deeds. In 2006, John Goodman took part in the filming of a sitcom about the work of the fictional TV channel NBC Studio 60 on the Sunset Strip, for which he was awarded the Emmy Award in 2007. The filmography of the comedian-actor was supplemented by the role of Pope Sergius II in the biographical drama Sönke Wortmann`s Pope Joan two years later.

John Goodman appears in a variety of roles: a comic hero Graham Bloomwood in the movie Confessions Of a Shopaholic, in the drama The Artist, the agent Joseph Keenan in the thriller Red State during these years. John transforms into a hero Piet Kleine in the sports drama Trouble with the Curve with Clint Eastwood in the title role.

In 2013, Goodman got into the main cast of the drama Inside Llewyn Davis with Oscar Isaac in the title role. John plays a jazzman Ronald L. Turner in the film about the history of the birth of folk rock in the US. The actor took part in the filming of the war film The Monuments Men with Cate Blanchett and Matt Damon, George Clooney in the main roles a year later.

In addition to working on movies, John Goodman takes part in the creation of animated films. He voiced characters in the movies The Adventures of Rocky and Bullwinkle, The Jungle Book 2, The Emperor's New Groove, Monsters, Inc., Cars.

John Goodman is an exemplary husband and father. In 1988, the young artist got acquainted with Annabeth Hartzog. A significant meeting took place during a friendly party. Soon young people began dating and got married a year later. In 1990, they had a daughter, Molly, with whom her parents moved to Los Angeles.

The appearance of the actor had significant changes during his creative biography. In 2007, weight John reached 396 lbs (180 kg) with the growth of 6 feet (183 cm). The actor had a lot of health problems and it prevented him from working with extra weight. Goodman had to ask for help from a professional coach, who identified the star of the screen diet and prescribed exercise.

Within three years, the artist lost 99 lbs (45 kg), which can be seen in the photo before and after the diet complex. In 2013, the weight of the artist increased again, which required the next intervention of a nutritionist. Now the weight of John Goodman is 286 lbs (130 kg).

In 2016, John Goodman played the protagonist Howard in the post-apocalyptic thriller 10 Cloverfield Lane directed by Dan Trachtenberg. The film collected $ 110 million on March 8, 2017, for the year of hire, the premiere of a fantastic action film from the series of films about the big monkey Kong: Skull Island, a prequel to the film Godzilla, shot two years earlier. John Goodman played the role of official William Rand. John Goodman has a net worth of $65 million dollars.

On March 10, the grand opening of the star named John Goodman took place in the Hollywood Walk of Fame. The artist, who was present at the ceremony, posed for photographers, lying next to the memorial site after the speech.