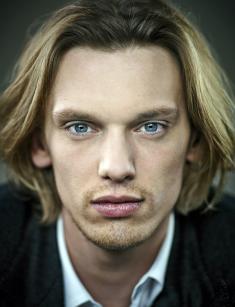 James Metcalfe Campbell Bower is a rather well-known English actor. He shortened his name and changed the first one for the nickname "Jamie" to make it more memorable. The young man is an in-demand stage and screen actor who managed to participate in the significant projects Harry Potter and the Deathly Hallows – Part 1 and The Twilight Saga: New Moon. The actor became world-famous for the roles in the films Sweeney Todd: The Demon Barber of Fleet Street and The Mortal Instruments: City of Bones. Moreover, Bower built a successful modeling career and became a lead vocalist of Counterfeit.

Jamie Campbell was born in the capital of the UK to David Bower, an employee of the Gibson Guitar Corporation, American manufacturer of musical instruments, and his wife Anne Elizabeth Roseberry, who works as a music promoter and manager. The parents also brought up his younger brother, Samuel. The boy attended a co-educational independent school in Hampshire. There, the child became interested in the theater, went to the children's studio, and soon became a member of the National Youth Music Theatre.

The parents were surprised by the son’s choice because they instilled in him the love for music but did not understand his interest in the theater and acting. But before the age of 16 Jamie Campbell Bower’s life was associated only with the stage. The young man put other activities on the back burner because the teenager dreamed of becoming the star of West End Theatre. Moreover, circumstances weighted in his favor. As a child, Jamie performed in the famous opera Ça Ira by Roger Waters, the founder of the group Pink Floyd. Nowadays, Bower is involved in the musical Bend It Like Beckham: The Musical, based on the film of the same name.

It is worth mentioning that Jamie Campbell also worked as a model in London. Besides, Bower has proved himself to be a great musician and singer. He has shown excellent singing in Bohemian Rhapsody and also performed with the British youth rock band Counterfeit, who recorded several EPs, including Tested on Animals and I in Modular. His younger brother Samuel also plays together with Jamie in the group.

In 2007, a friend of James' parents, actress Laura Michelle Kelly, offered the young man to act in a movie. The future celebrity agreed and played a bit part in the tragicomedy The Party. Soon, the aspiring actor was cast in the role of Anthony Hope in Tim Burton's thriller Sweeney Todd: The Demon Barber of Fleet Street, where he collaborated with Johnny Depp and Helena Bonham Carter.

Later, Jamie Campbell Bower’s filmography included Guy Ritchie’s crime action movie RocknRolla, the historical drama Winter in Wartime, the fantasy TV series The Prisoner, and the crime film London Boulevard. The actor also played the young wizard, Gellert Grindelwald, in the final part of the Harry Potter saga and one of the most bloodthirsty vampires named Caius, a member of the Volturi coven, in the famous Twilight saga. He first appeared in the second part titled The Twilight Saga: New Moon. The actor has not always played prominent roles, but critics have invariably praised his acting skills.

In 2011, two movies with Jamie Campbell Bower were released, and they both belong to the historical genre. The actor portrayed young King Arthur in the fantasy series Camelot, and young Oxford in Roland Emmerich’s film Anonymous, in which he helped the director to clarify the issue related to the existence of William Shakespeare.

One more noteworthy project is the urban fantasy film The Mortal Instruments: City of Bones. Actor Alex Pettyfer, Douglas Booth, and about a dozen other stars auditioned for one of the leading roles, Jace Wayland, but the director chose Bower.

Before the shooting, the actor spent 3 hours in the make-up chair, because they had to cover his tattoos and draw the symbols of Shadowhunters on top of them. Once Bower shared that he agreed with the make-up artist not to go to the shower after work so that the next morning he had the pictures and could sleep a little longer. But the actor could live without a shower for one day. Then they used to do the necessary work every second day.

Jamie Campbell Bower was originally cast in the role of Waymar Royce in the epic Game of Thrones. The actor even starred in the pilot episode. But when the directors began reshooting it, the actor could not participate in the filming due to a busy schedule. As a result, he was replaced.

In 2007, the actor began dating fashion designer Zoe Graham, and the couple was together for two years. Jamie has a tattoo in memory of his girlfriend. But later the young man removed it and tattooed a new picture.

On the set of Harry Potter and the Deathly Hallows – Part 1, Jamie met actress Bonnie Wright, who played the role of Ginny Weasley, and they began a romantic relationship.

Although they carefully concealed this fact, the information about their engagement was leaked to the press. At first, Bonnie denied these rumors. But in the end, the actor officially confirmed that they were going to marry soon. However, one year after the announcement, the couple broke up.

His next love story was connected with Lily Collins, a colleague in the film The Mortal Instruments: City of Bones. They dated a year and a half, and then Bower became interested in other women. The media spread rumors that Jamie Campbell had a romantic relationship with Spanish model Zina Charkoplia. They claimed that Jamie left beautiful Lily for the runway star. Bower also had a love affair with the British model, Matilda Lowther.

In the spring of 2015, Jamie reunited with Lily Collins and even dedicated the song “Come Get Some” to his girlfriend. Then the couple showed the fans that they were together again, posting their photos on Instagram. There were rumors about the engagement, but in September the young people announced the end of their relationship.

For some time, Jamie had a relationship with model Olivia Hann. But they soon broke up. Nowadays, there is no information about the young man’s new relationship. But it is known for sure that Jamie Campbell has no children.

The famous actor has tattoos on his body. They are not just simple pictures because each of them means something.

The actor has Bob Dylan bum tattoo. It shows Jamie's happy childhood. The guy made this tattoo after wagering with a friend. So, Bower will forever have a tattoo in memory of his beloved singer.

But the meaning of the tattoo in the shape of a ball is unknown. But the actor’s fans believe that it was made in honor of the character in the TV series The Prisoner.

The actor has not said the meaning of the tattoo depicting an anchor. However, he told in an interview that the images of the cross and the skull meant his good and bad sides. The young man also shared that he had dyslexia. Therefore, it is easier for him to read poetry which has rhythm and short phrases.

The actor also has tattoos in honor of his relationship with Lily Collins. It is the inscription "Love always and forever 1989". Lily made the same tattoo on her back, but instead of 1989, it depicts 1988.

Jamie Campbell was a model with Select Model Management in London. The young man also participated in the fashion shows of his ex-girlfriend Zoe Graham.

In the summer of 2017, viewers saw their favorite actor as an English poet, translator, and playwright, Christopher Marlowe, in the TV series Will. The multipart film tells about the tumultuous youth of William Shakespeare when he made a breakthrough on the stage of the London theater of the XVI century.

Laurie Davidson landed the role of the great English writer. Jamie's partners on the set were also Olivia DeJonge, Ewen Bremner, William Houston, and others.

Although the project received positive reviews from film critics, TNT closed the TV series after one season.

In 2018, the actor went on a tour across the USA together with the band Counterfeit.

At present, Jamie's net worth is estimated at $ 3 million.