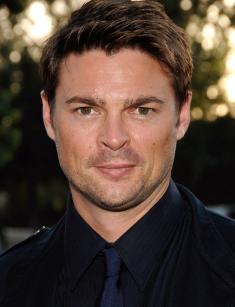 The roles of Judge Dredd in the British fantastic action movie Dredd (2012) and Éomer in The Lord of the Rings trilogy made the New Zealand actor Karl Urban popular all over the globe. The artist also personified Dr. Leonard McCoy in the iconic American franchise Star Trek that has been developing since the 1960s.

Karl-Heinz Urban was born in June 1972 in the capital of New Zealand. The actor has German roots: his parents migrated from Germany. The father founded a small leather goods company and expected his son to develop the business. The mother got hired at a producing company.

The boy attended a church school in Wellington. He frequently visited his mother at her work and had the chance to watch how movies were made. Because of that, the father’s plans to make Karl his successor never came true: Urban fell in love with acting and could hardly think of anything else.

Urban debuted on the screen at the age of eight: he got a tiny role in a popular series. He did not appear in cinematography until the end of school, but theater turned out to be his new passion. Karl participated in amateurish performances; as a high-school student, he created scripts and staged plays on his own.

When Urban graduated from school, he entered Victoria University of Wellington to quit his studies the next year.

The world of theater and movies grabbed the young actor’s attention so much that he had no time for studies. Karl Urban started his career with the series Shortland Street where he played a gay paramedic Jamie Forrest. The debut was successful. The man also appeared in the drama Shark in the Park.

The mid-1990s were even more favorable: the artist participated in the popular series Hercules: The Legendary Journeys and Xena: Warrior Princess where he played Julius Caesar and Cupid. The series was filmed all over the globe and brought the cast much fame.

The role in the New Zealand series The Price of Milk (2001) was particularly significant for Urban; many countries bought the broadcast license. It is the story about the adventures of Rob, a farmer, and his girlfriend Lucinda. The fantasy melodrama opened the road to Hollywood: soon after this project, Karl Urban appeared in many American blockbusters, such as The Lord of the Rings, The Chronicles of Riddick, and The Bourne Supremacy starring Matt Damon and Franka Potente.

Steve Beck’s horror Ghost Ship strengthened the actor’s positions in Hollywood. In 2005, the actor appeared as the main character in the popular game Doom: gamers had the opportunity to see the artist as John "Reaper" Grimm.

2009 and 2012 brought new notable roles and waves of popularity: Urban personified Doctor Leonard McCoy in Star Trek and Judge Dredd in the remix of the 1995 fantastic action movie.

The Star Trek franchise is based on the iconic series of the 1960s, The Original Series (TOS). It has always been successful. Fans appreciated the new work. Its creators delicately put the new Star Trek world into the whole story thanks to the ideas of time traveling and temporal paradox. The 2009 movie is both the sequel and the reboot of TOS.

Urban played one of the main characters, as well as Chris Pine and Zachary Quinto. Similar to his colleagues, the actor brought something new to the classic figure of the doctor. For instance, Urban’s McCoy is taller (Karl’s height is 6.07 ft. or 185 cm.) and looks stronger than DeForest Kelley’s McCoy. As a result, there were several new jokes about the character, like those about the strongest hands in the starship.

Rumors have it that Captain Kirk and his first officer Spock (Pine and Quinto) were supposed to be the main characters that illustrated the modern pattern of entirely different persons. Leonard McCoy, who was the part of the trio in TOS, could have been left outside; Urban stood up for his character and did not let the doctor become a secondary figure.

In comparison with Star Trek, reviews on Dredd (2012) were ambiguous: some people did not like the creators’ obsession with the 3D format.

In 2011, the actor appeared in the post-apocalyptic thriller Priest.

2013 was marked with the Star Trek sequel: Star Trek Into Darkness with the antagonist figure Khan (Benedict Cumberbatch). At the end of the movie, the starship Enterprise goes into the new five-year mission, and Chris Pine pronounces the famous words about the mission goals taken from the original.

Besides, in 2013, the actor got the lead role in the fantastic series Almost Human and came back to the part of the antagonist Vaako in Riddick with Vin Diesel and Katee Sackhoff. The next year, Urban participated in the thriller The Loft.

In 2000, the 28-year-old man met the charming make-up artist Natalie Wihongi at the movie set of The Privateers. The couple dated for several years; their son Hunter was born in the early 2000s. In September 2004, the lovers finally married.

In 2006, the second son Indiana was born; the parents named him after the famous Indiana Jones.

In 2014, the news about the actor’s divorce perplexed his fans. Since that time, the media are following Urban everywhere and watch his personal life.

The man is actively engaged in charity work: the celebrity supports poor children.

Although Karl’s characters are usually gloomy and brutal, the actor himself is a cheerful, friendly person. His Instagram page is full of videos where the man plays tricks with his colleagues, dances, sings at a movie set, or laughs with his friends.

Star Trek Beyond was premiered in 2016. By the beginning of the movie, the starship has been carrying out the research mission for three years. The familiar characters have to face new aggressors and reveal some unpleasant facts from the past of the Federation.

Some fans criticize J.J. Abrams’s works for the dissonance with the franchise spirit: originally, that society is idealistic. There is no lack of money, inequality, or wars there; people are involved in peaceful scientific research. The reboot version, however, portrays the fantastic, militaristic, and capitalistic world.

In 2017, the actor appeared as Skurge in the superhero movie Thor: Ragnarok, the sequel of Thor: The Dark World. The project was premiered in fall.