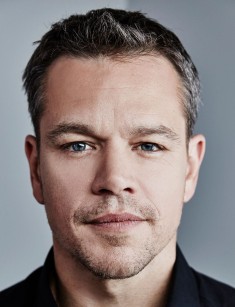 Matt Damon is an American actor. Damon also, and perhaps even more, has succeeded as a screenwriter and a producer. As an actor, Matt Damon was nominated three times for Oscar for his roles in the films "Good Will Hunting", "Invictus" and "The Martian", but it is screenwriting brought Damon the statuette. In 1998 Matt Damon received "Oscar" for the original scenario for the drama "Good Will Hunting".

Matthew Page Damon was born in Cambridge, Massachusetts. His father Kent Damon was a tax officer, and his mother Nancy Karlsson-Page worked as a teacher of lower grades at Leslie private school. Matthew has an elder brother, Kyle, who later became a famous sculptor.

The first years of his life Matt spent in a respectable area of Boston. But when he was not yet three years old, the parents decided to divorce. Matthew and Kyle returned with their mother to Cambridge and began to live in an apartment building.

In 1978, Matt met Ben Affleck. The guys become childhood friends, and later will appear together on the same stage.

After graduation from the general education school, Matt enters Harvard University, where he studies English and literature. In addition, he attends writing courses. But after 3 years of studding at Harvard, the young man decides to try himself in acting. When he announces his idea to his mother, she does not support him and refuses to finance the trip to Hollywood, but does not mind if he makes this trip at his own expense.

The creative biography of the actor begins not very successfully. Having 200 dollars in his pocket, the guy goes to the "Valley of Stars", where after a while he gets an episodic role in the melodrama "Mystic Pizza" in 1988. His second role was also small - the role of sports commentator in the film "Field of Dreams" in 1989. Slightly disappointed, Damon returns home, graduates from university and makes a second attempt to become a movie star.

The first serious roles Matt Damon received in the films "School ties", "Geronimo: An American legend" and "Courage Under Fire." All these films combine a deep understanding of the psychology of the characters and immersion in the atmosphere of the film. Nevertheless, they did not bring any special glory to the actor, and he decides to take a desperate step.

He joins forces with his friend Ben Affleck. The guys together complete Matt’s student scenario "Good Will Hunting" and create their own project. Many studios liked the scenario, but they refused to buy it, because Matt and Ben put the condition – they wanted to play the main roles in the film. Only the company Miramax Films decided to take a chance and signed a contract with the boys.

Released in 1997, the film "Good Will Hunting" made a killing. $ 10 million invested in the film were paid off many times; the film collected more than 225 million. The film also won a lot of awards: 9 nominations for "Oscar" - and 2 wins. Ben and Matt became the owners of the statuette as the best screenwriters. In addition, the duo received the Golden Globe, the Silver Bear at the Berlin Film Festival and the National Society of Film Critics Award of the United States.

After such a deafening success, Damon starred in the main roles in the legal film "The Rainmaker" and in the criminal drama "Rounders". The minor role in the cult film "Saving Private Ryan" by Steven Spielberg brings the actor nomination for the Screen Actors Guild of the United States. Damon played the role of Private James Ryan.

A year later, Damon appears in the psychological thriller by Anthony Minghella "The Talented Mr. Ripley." The full title of the film, shown in captions, has 15 epithets of Mr. Ripley, besides talented the hero also called melancholy, musical and persecuted. The film is based on Patricia Highsmith's book, the first in a series of novels about the crook Tom Ripley. The film softened the cruel moments of the novel, making Ripley's crimes less cold-blooded. Matt Damon played the role of the young rascal. The main roles were also played by Jude Law and Gwyneth Paltrow.

Damon and Law played the leading roles not only because of their acting talents. Mr. Ripley pretends to be his friend Dickie, whose role was played by Law. The actors should have physical resemblance to make the plot more authentic. Both actors have blond hair and the right facial features. Also, Matt and Jude have the same height - 178 cm.

The main role in the brilliant psychological thriller "The Talented Mr. Ripley" brings the actor five nominations at once in various American film awards, including the "Golden Globe" and MTV Movie Awards. After that, Matt Damon gets a number of very successful roles.

In 1999, the actor plays a fallen angel Loki in the film "Dogma". Damon's partner in the film is Ben Affleck. The director and the author of the scenario was Kevin Smith, who included "Dogma" in a single fictional world of his films.

The film is notable for its scandalous plot: the church has rebranding, drug addicts become prophets, fallen angels try to trick the Heaven rules, and the characters constantly ask questions about the race, the orientation of the characters of sacred texts. Nevertheless, the film was shown in Cannes and did not cause criticism or mass protests.

Then Damon appears in the roles of golf player Rannulf Junau in "The Legend of Bagger Vance" and one of the Siamese twins in the film "Stuck on You", in the criminal comedy " Ocean's Eleven " and its sequel "Ocean's Twelve", where he plays the role of Lynus Caldwell. In the film "Gerry" by his own script the actor plays one of two main roles.

Damon’s another acting success was his shooting in the film "The Bourne Identity " about the former CIA agent who lost his memory and who was a hit man. The film was released in 2002, had a huge commercial success and received excellent reviews from film critics. Later, Matt will participate in the continuations of this film - "The Bourne Supremacy" and "The Bourne Ultimatum".

In 2006, the actor appears in the crime thriller "The Departed". The success of the film was largely ensured by the actors. Matt Damon looks like another actor - Mark Wahlberg. The similarity is so strong that these actors are often on the top of the lists of the most similar stars. Usually the filmmakers try not to take two similar actors in one film in order not to confuse the viewer. But Martin Scorsese, director of The Departed, was not afraid to take both actors to key roles.

Matt Damon appeared on the screen working for the criminal boss Colin Sullivan. He works in the police in order to spy on Mafia. The mirror role plays Leonardo DiCaprio, he gets the role of a graduate from the police academy of Billy Costigan, who works for mafia in order to collect the information for the police. Jack Nicholson plays the bright role of the mafia boss.

The film received four Oscars: for the best film, as well as for editing, directing and adapted script, as the plot of the "Departed" is based on the Hong Kong action movie "Infernal Affairs".

Also it is worth noting the adventure fantasy thriller "The Brothers Grimm", in which Matt Damon and Heath Ledger play the famous fairytale brothers, the black comedy "The Informant", as well as the biographical drama "Invictus", the role of Francois Pienaar which brought the actor nomination for "Oscar", "Golden Globe" and the Screen Actors Guild Award of the United States.

In 2015, Matt Damon's significant work was the role of astronaut Mark Watney in the film adaptation of the famous science fiction novel The Martian by Andy Weir. For the role of the astronaut, trying to survive on Mars, Matt Damon won the Empire Awards and the Golden Globe, and was nominated for Oscar.

During high school and university studies, Matt had relations with Skylar Satenstein, who became the prototype of the character Skylar in the film "Good Will Hunting." During 1997 he was dating several famous women, for example, the actress Minnie Driver, whom he met on the set of the movie "Good Will Hunting", and with Claire Dines, his partner in the movie "The Rainmaker".

At the New Year's party on December 31, 1997, Matt Damon met and began dating the famous actress Winona Ryder, but in spring 2000 they broke up.

Since 2001, for 2 years he was in relationship with personal assistant of Billy Bob Thornton and Ben Affleck - Odessa Whitmere. They broke up in 2003.

In 2003, in Miami, the actor met Luciana Barroso, who at that time worked in a local club. The couple married in December 2005, and in summer they had a daughter, Isabella. Then, in 2 years, Matt Damon became a father for the second time - they had a daughters Gia and Stella. In total, four children are growing up in the family - Matt also brings up Lucia's eldest daughter Alexia.

Damon does not share his personal life with the public. Photos with the actor post few pages in Instagram. Pages have thousands of subscribers, but among them there is no verified account. Most likely, the actor himself does not have a page in this social network.

In 2016, the actor returned to the famous role of Bourne and appeared on the screen in the action movie "Jason Bourne". The actor is also a member of the screenwriters of the film.

The film takes place ten years after the events of the previous part. The former agent Bourne defeated amnesia and earns a living by fighting without rules. But new details of the past work, his own recruitment and the life of Jason's father makes Bourne to return to investigations and confrontation with the secret services. "Jason Bourne" won the award of "Empire" for the best thriller.

In December 2016 on the screens of China came the adventure fantasy "The Great Wall". In early 2017, there was the world premiere of the film. The director of the picture was a Chinese Zhang Yimou.

Damon appeared in the movie in the role of archer Willem. The Sino-American film tells how the European adventurers are trying to get the secret of Chinese black powder, but instead they face terrible monsters and realize that the Great Wall of China was built to protect against the undead, and not from people from other countries.

In November 2017, the screen version of the criminal drama "Suburbicon" with Damon in the title role was released. The plot of the film tells about 1950s. At the beginning of the film, the city Suburbicon looks like paradise incarnation and American dream. Neat houses, polite neighbors and happy families fill the city.

The tone of the film changes dramatically when robbers kill Rose Lodge, the wife of the hero Damon. Gardner Lodge begins to react strangely to subsequent events, and under the attractive facade of urban life there are intrigues, blackmail and dirty secrets.

At the end of December, 2017, the comedy "Downsizing" will appear on the screens. The film tells about volunteers who agreed to participate in an experiment to downsize their bodies. Details about the film are not yet available to the press, but it is known that Matt Damon, Kristen Wiig, Jason Sudeikis, Alec Baldwin and Neil Patrick Harris will play in “Downsizing”.

In summer, 2018, Damon will appear in Lynus Caldwell's cameo in the crime film "Ocean’s 8." The character of the actor will join a number of characters, linking the new film with the previous parts about "Ocean's Friends." Despite the fact that the film did not start an active advertisement, "Ocean’s 8" had already provoked a contradictory reaction. Some fans of the franchise are happy to see a large number of new and independent female characters that will supplement the films and make them more diverse, while others defend the male part of the criminal group and believe that the heroines are introduced only for the social requirements of society, and not for the sake of the plot and the renewal of the franchise.