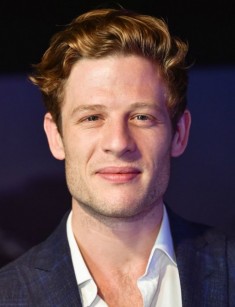 James Norton is an English theater and film actor who gained worldwide recognition for the role of Andrei Bolkonsky in the BBC miniseries War & Peace as well as a priest and officer in the detective drama Grantchester.

James was born in London to a family of teachers. The mother of the future actor, Lavinia, was a teacher at a secondary school, and father Hugh was a Lecturer at Hull School of Art and Design. After retirement, he began to play bit parts with his son on the theater stage.

James did not spend his childhood in the capital because soon after the birth of the son, his parents moved to Malton in North Yorkshire. The future actor attended an independent Roman Catholic boarding school, and at the time the boy's main hobbies were theater and tennis. At the age of 15, James Norton played professionally on the stage of the Stephen Joseph Theatre in Scarborough.

After graduation from school, the young man entered college within the University of Cambridge, where he continued to study theology and even received a Grant to travel to India. But in Cambridge, Norton did not forget about theatre performances. The young man played brilliantly in the productions of the local Marlowe Society theatre club and appeared in almost all Shakespeare’s plays.

After graduation from college, James went to London and studied acting at the Royal Academy of Dramatic Art for three years. But six months before graduation the young man left the university to play a leading role in the impressive play That Face.

James Norton made a screen debut in 2009 when he played a bit part in the melodrama An Education. The novice actor portrayed the boyfriend of young cellist Jenny (Carey Mulligan), but the woman broke up with him to date a new boyfriend, David (Peter Sarsgaard).

The film received positive reviews from film critics and won a BAFTA Award. In the USA, the movie was nominated for an Oscar. It played a crucial role in the career of the British actor. The cast, including James Norton, attracted the deserved attention of viewers and directors. But the actor was in no hurry to accept offers.

Next time Norton appeared on the screen only in 2012 in the romantic comedy Cheerful Weather for the Wedding, where he played the role of Owen, and the action-packed drama Restless, where he portrayed the character, Kolia. In the series Inspector George Gently, the actor appeared as James Blackstone. The film, which was broadcast for five seasons on BBC One, told about the elderly police officer, Gently (Martin Shaw), investigating the serial killer case.

In 2013, the actor's filmography included six movies. In the high-rated series Doctor Who, Norton appeared as Onegin in the episode entitled Cold War. James also starred in the comedy Blandings, where he appeared as Jimmy Belford.

Two biographical films featuring Norton attracted viewers’ attention. James played Guy Edwards in the sports drama Rush about a confrontation between outstanding drivers of the 1970s, Niki Lauda and James Hunt (Chris Hemsworth and Daniel Brühl). The actor appeared as British aristocrat Oliver Ashford in the melodrama Belle about the illegitimate daughter of British officer John Lindsay. The dark color of her skin made her life very difficult.

Viewers took the actor more seriously after his role in the TV series Death Comes to Pemberley, which is a director's interpretation of the continuation of the legendary novel Pride and Prejudice by Jane Austen. Such works as the crime series Happy Valley and the detective series Grantchester made James Norton world-famous. For his role in the first film, the artist received a Crime Thriller Award and was nominated for a British Academy Television Award.

James Norton also participated in the creation of the action movie Northmen: A Viking Saga and portrayed the hero, Bjorn. The actor played the main character, Ralph, a member of an informal organization, in the comedy-drama Bonobo about the life of the hippie community. The artist also starred in the family drama Life in Squares about the relationship between sisters Vanessa and Virginia (Eve Best and Catherine McCormack). In the film adaptation of the cult book “Lady Chatterley's Lover,” Norton portrayed Sir Clifford Chatterley, the husband of Constance (Holliday Grainger).

In 2016, the actor pleased his fans with participation in the film based on Leo Tolstoy's epic novel “War and Peace,” where he played the role of Andrei Bolkonsky. Besides James Norton, Lily James (Natasha Rostova) and Paul Dano (Pierre Bezukhov) played the leading roles.

During the filming, the actor together with the shooting crew came to Russia, because some scenes were filmed on Palace Square, in the Assumption Cathedral, on the territory of the Great Gatchina Palace, in the Catherine Palace of Tsarskoye Selo and other historical sites. Later, James declared that he was fascinated with St. Petersburg and would return there during a guided tour.

The actor has never been officially married. Norton does not like to tell about his personal life. It is known that over recent years, British actress Jessie Buckley has been the actor’s girlfriend. James’s lover also auditioned in the mini-series War & Peace, where she played Maria Bolkonskaya.

James Norton lives in London, where he bought his own house in the prestigious Peckham district two years ago. Few people know that the actor has type 1 diabetes. James once said about it at the Crime Thriller Awards ceremony.

On September 29, 2017, Niels Arden Oplev’s thriller Flatliners premiered worldwide. Michael Douglas produced the film. It was a continuation of the 1990 film of the same name, which told about the laboratory experiments of a group of students that produced near-death experiences. Besides James Norton, Ellen Page, Diego Luna, and Nina Dobrev performed the leading roles. In November, the film is scheduled to premiere in Russia.

In the summer, the shooting of the British drama Hampstead was finished. James played there a leading role. Now the actor is filming in the series McMafia, which will also feature Russian stars Aleksey Serebryakov and Maria Shukshina. 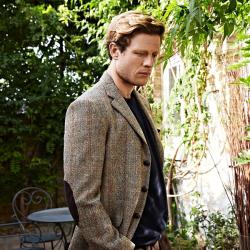