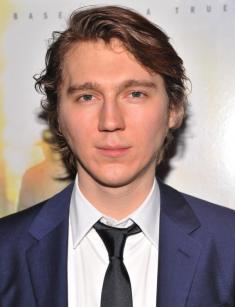 Paul Dano is an American actor, producer, scriptwriter, director, the Independent Spirit Award winner, and the nominee of the Golden Globe and BAFTA. He played the main characters in the movies The Newcomers, Little Miss Sunshine, There Will Be Blood, and the mini-series War & Peace.

Paul Franklin Dano was born in June 1984 in New York. The would-be actor’s family had nothing to do with cinematography. The father was a businessman, and the parents had to move frequently due to his work.

Paul Dano and his younger sister Sarah spent their early childhood in New York; later, they moved to New Canaan, Connecticut. The siblings graduated from school in another town of the state, Wilton. To continue his education, Dano came back to his childhood city, New York, and enrolled at the famous Eugene Lang College of Liberal Arts.

Paul took an interest in theater early: the ten-year-old boy went to the auditions at a Broadway theater. Two years later, the actor debuted in the play Inherit the Wind with George C. Scott and Charles Durning. The artists’ mastership impressed Dano and inspired him to think about his future profession.

As soon as the young man turned 17, he debuted in cinematography and participated in little episodes of the comedy Smart Guy. In 2000, Paul was finally given the notable role in the full-length movie: the family drama The Newcomers. Dano’s character, Joel, brought much recognition; the actor started receiving new offers.

In 2001, Paul appeared in the dark drama L.I.E. and played a troubled teenager Howie Blitzer from Long Island. This role demanded a delicate psychological approach and reflection. Paul’s work was brilliant: he played the young man who got confused about evil and good and suffered because of his family issues authentically. The project brought the artist the Sundance Jury Prize and Independent Spirit Award; few beginners had the honor of gaining such prestigious awards.

In 2002, the artist participated in the popular HBO project The Sopranos about the gangsters’ lives in New Jersey. He played a secondary role of Patrick Whalen for two years.

The 2006 adventure movie Little Miss Sunshine was another masterpiece starring Paul Dano. It was a tremendous success; the project was nominated for the Academy Award for Best Picture. Both critics and ordinary viewers found Paul’s acting spotless.

2007 was marked with new achievements. Paul Thomas Anderson’s There Will Be Blood gave the young actor the nomination for BAFTA; unfortunately, his colleague Javier Bardem surpassed him. Nevertheless, everybody was talking about Dano after the drama. The media emphasized that the actor “enriches his largely silent role with a young man of uncommon depth, commitment, and sincerity”; other reviews were favorable as well.

Young and popular, the actor gladly participates in low-budget and independent projects that newbies usually select. Although Paul can collaborate with star directors, he prefers projects that ignite his interest. Money is not the issue of the primary importance for the young man; polishing his acting skills is.

The 2014 movie Love & Mercy is worth mentioning. It is Bill Pohlad’s biographical project about Brian Douglas Wilson, the American musician and the founder of The Beach Boys. Paul Dano played the musician himself. Two years later, the artist was nominated for the Golden Globe Award for Best Actor – Motion Picture – Drama; however, it was Sylvester Stallone who won the prize for the movie Creed.

In 2015, the actor pleased his fans with the new lead part in the drama Youth. It is the story about two old men’s friendship: the director Mick Boyle (Harvey Keitel) and the composer Fred Ballinger (Michael Caine). They are on vacation in the Alps and watch the younger generation trying to solve their problems. The project received many international awards.

In 2016, the artist extended his filmography with the tragicomedy Swiss Army Man and collaborated with Daniel Radcliffe. It is a story about the friendship of a human being and a corpse that has supernatural powers. The audience’s and critics’ opinions were ambiguous.

In 2008, Paul Dano began to produce movies. Gigantic was the first project; Paul also played the main character, a mattress seller Brian Weathersby, who adopted a Chinese boy. Zooey Deschanel participated in the movie as well. Four years later, Dano worked on For Ellen and Ruby Sparks as a producer and the cast member.

Literature lovers had the chance to see the actor’s skills in the new screen version of the famous novel War and Peace by Leo Tolstoy; Tom Harper directed the series. One can argue whether Paul Dano’s Pierre Bezukhov is close to the writer’s character; however, it goes without saying that the young actor has genuine talent.

The British mini-series was first aired on BBC in May 2016. Lily James and James Norton who personified Natasha Rostova and Andrei Bolkonsky became Dano’s stage partners.

Today, the actor lives in New York; he works and studies at a university. The young man likes to read modern literature; besides, he is the guitarist and vocalist of the music group Mook.

In 2007, the actress Zoe Kazan became the artist’s girlfriend. The young people often visit social events, and their pictures appear in glossy magazines. In 2018, their daughter, Alma Bay, was born. However, the couple does not plan their wedding or children: each of them spends too much time at work to become a wife and a husband.

The actor leads an active artistic life and always tries something new. In 2017, Paul directed his own project Wildlife and wrote a script for it. As the story runs, a viewer can see an ordinary American family. The mother is having an affair with another man while the father loses his job and begins to fight a forest fire. The 16-year-old teenager witnesses all those events.

The same year, the premiere of the South-Korean movie Okja took place at the 70th Cannes Film Festival. It is a story about an Asian girl who used to live in the rainforest and had to go to a concrete jungle. Paul Dano played one of the main characters, Jay.