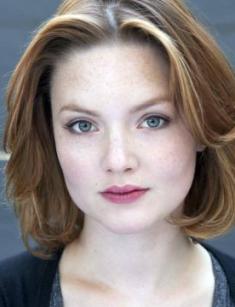 Holliday Grainger is an English stage and screen actress. There are a lot of prominent characters in her filmography, but she became known for the role of Lucrezia Borgia in the historical TV series The Borgias. Her heroine’s beauty, elegance, and trickery managed to win the viewers’ hearts.

The future actress was born on March 27, 1988, in Didsbury, Manchester. As a child, she was fond of dancing and learned Spanish. In 2006 she graduated from Parrs Wood High School.

Her parents divorced, and the mother, Gian, raised the daughter. The woman had to hold more than one job to make for a living.

She began an acting career at the age of 6, when her mother’s friend, a casting agent, offered the little girl to take part in the filming of the comedy-drama All Quiet on the Preston Front. Little Holliday immediately turned on the heat, because she liked the movie Léon: The Professional with young Natalie Portman in the title role.

Then she began to attend auditions. Until she was 16 years of age, her mother accompanied the girl everywhere, and then the woman let her daughter float freely.

In 2007, Holliday entered the University of Leeds, the largest university in the UK. But due to the busy filming schedule, she had to opt for the correspondence department at the Open University.

Holliday admitted in an interview that she had not thought about an acting career before, because she had dreamed of becoming a butcher. She really liked to hold raw meat in her hands. Even in school, when she was actively filming in movies, the girl was thinking about becoming a neurosurgeon. But in the end, Grainger became a talented actress.

Since 1995, Holliday has regularly played bit parts in TV shows and films. She got an opportunity to show her talent in the TV series Robin Hood, in which she played Meg.

After this movie, the young actress began to get exciting roles and receive invitations to new projects. In 2011, she appeared in Cary Fukunaga's film, Jane Eyre. She played Diana Rivers. Film critics gave the film positive reviews, and the same year it was nominated for the Academy Award for Best Costume Design.

Grainger became world-famous starring in the TV series The Borgias, which tells the story of the famous and scandalous Italian family in the Renaissance period. Her heroine Lucrezia Borgia is the only daughter of Pope Alexander VI and his mistress, Italian courtesan Vannozza dei Cattanei. Despite the historical inaccuracies, the series was warmly welcomed by viewers and renewed for another two seasons.

Later, Holliday’s filmography has often included roles in historical films. The woman said in interviews that she always got parts of high society girls who lived in the past. She also mentioned that corset was an excellent thing.

In 2012 she appeared in the movie Bel Ami, based on the novel of the same name by Guy de Maupassant. Her colleagues on the set were Robert Pattinson, Uma Thurman, Christina Ricci, and others.

In 2013, the actress landed the leading role in the film adaptation of Charles Dickens' novel "Great Expectations." In 2015, the fantasy film Cinderella was released, in which Holliday played the mean half-sister of the title character.

In 2016, the woman played in the film of a different genre. She starred in the blockbuster The Finest Hours, based on real events. The story describes the historic 1952 Coast Guard rescue of the crew of two oil tankers during a storm when four officers used only wooden motorboats.

Holliday played Miriam, the bride of one of these guys. The woman works as a telegraph operator, and when her beloved Bernie calls to the station, Miriam says that she is going to marry this person. Her heroine has moral power and is resolved.

In 2017, Grainger appeared in four projects. She played Louise Kendall in the historical melodrama My Cousin Rachel. The film was based on the novel by Daphne du Maurier. She got the role of Maria in the no less notable film Tulip Fever.

But perhaps the most unusual project, in which the actress participated, is the TV series Philip K. Dick's Electric Dreams. The story consists of standalone episodes, based on the work by cult American fantasy author Philip Kindred Dick. All stories have different time and space, but the study of human nature unites them.

Grainger also got a role in the TV series Strike, which was based on the novels by J. K. Rowling. But now her writing sounds more mature. There is no Harry Potter or magic in the project. The story focuses on a private detective, Cormoran Strike, and his young assistant, Robin Ellacott (Holliday).

Grainger does not like to reveal her personal life. She does not have accounts on Instagram and Twitter. However, there are her fan pages on social media.

The young woman dated actor Harry Treadaway. He is known for his role as Dr. Victor Frankenstein in the television series Penny Dreadful. Previously, their photos had often appeared on the Internet. But for now, it is not known whether Holliday and Harry are together or have already broken up. None of them has talked about it.

Although the woman is a popular actress, she tries to be a low profile figure. Of course, she does not run away from the red carpet, but the actress is still a hard nut to crack for the paparazzi. Grainger has not been involved in juicy scandals; she has not had love affairs with politicians or undergone plastic surgery.

It is only known that Holliday has neither a husband nor children so far.

In May 2018, the series Patrick Melrose was scheduled to premiere. Benedict Cumberbatch, known for the character of Sherlock Holmes, played the leading role in the film. The title character is a playboy star, aristocrat, and alcoholic, Patrick Melrose. It is a film adaptation of five novels of a famous British author, Edward St Aubyn, who was nominated for the Booker Prize. Holliday Grainger got one of the leading roles, Bridget Watson Scott.

One more movie with her participation, the melodrama Tell It to the Bees, goes through the production stage. Her colleague on the set was Anna Paquin. They portrayed women who had a non-traditional sexual orientation. Moreover, these events happened in the 1950s, when puritanical public norms reigned. The exact release date is still unknown.

Holliday Grainger has a net worth of $5 million.