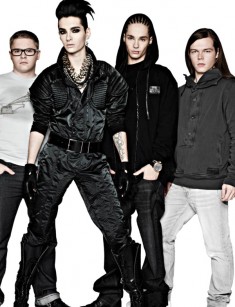 In 2007, when young people all over the world were wearing black and pink bangs and dark clothes, Tokio Hotel was the trend-setter of emo fashion, and the vocalist Bill Kaulitz who used the black eyeliner was the icon of millions of boys and girls. Today, the group performs synth-pop, tops music charts, and attracts crowds of fans in their shows.

Half of the group, the twins Bill and Tom Kaulitz, were born on September 1, 1989, in Leipzig. When the boys turned seven, their parents, Simone and Jörg, divorced. Two years later, the mother married the musician Gordon Trümper. In their early interviews, the brothers emphasized his contribution to their success: Gordon taught the children how to play the guitar and develop the vocal gift.

Bill was better at singing; under Tom’s accompaniment, he sang for his mother and stepfather. At the age of nine, he created his first song, “Schwarz” (“Black”), and devoted it to his pet mice who died.

The boys used to rehearse in a garage and give acoustic concerts for neighbors. This is when Georg Listing and Gustav Schäfer noticed them. 13-year-old Gustav could play the drums a little, and 14-year-old Georg could play the bass guitar. The teenagers combined their forces and founded the group Devilish in 2001. They were only children when many people started gathering in Magdeburg clubs to listen to them. Moreover, the band had the album Devilish released. The boys recorded 300 copies on their own and sold them at their concerts.

To attract attention to the group, Bill Kaulitz participated in the children’s show Star Search and reached the quarterfinal. Later, the producer Peter Hofmann heard Devilish in a small bar, Gröninger Bad. As he said in his interviews, he was sure the group was going to succeed.

Hofmann was right. Peter brought the teenagers to the studio where they met Patrick Benzner, Dave Roth, and David Jost.

Hofmann suggested the group name should be changed. The leader Bill chose “Tokio Hotel”: the German version of “Tokyo” and “hotel” as the place where he would like to live in tours.

The young men created 15 songs. On August 15, 2005, the presented one of them, “Durch den Monsun” as a single. Soon, they found themselves famous.

In less than a week, the song reached the top positions in German music charts; Australia, Great Britain, and Canada appreciated the single as well. Tokio Hotel created a music video for this song that all big channels were broadcasting. The 14-year-old twins looked eccentric: both had piercing; Tom had long dreadlocks, and Bill painted his nails and lined his eyes black. Together with this image, the group’s music became popular, and Tokio Hotel won the hearts of many fans in several days.

In September of the same year, the debuting album Schrei came out; it consisted of 12 songs in German. The next year, it was re-recorded: Bill’s voice was changing. The new work was entitled Schrei – So Laut Du Kannst (“Scream as loud as you can”). Three new songs including “Schwarz” were released then.

The main hit “Schrei” became the hymn of the German youth. It was their protest against adults’ pressure: young people did not want to be told what to do and how to live. To create the music video, the group and fans wreaked havoc in the two-stored house that Peter Hofmann had bought for several dozens of euro. Soon, Tokio Hotel presented the video for “Rette Mich” that rose the topic of suicide.

In March 2009, the band won the prestigious König Pilsener Arena; many international stars, such as Paul McCartney, Kylie Minogue, and Whitney Houston, had gained it. 11600 people went to the concert of Tokio Hotel.

Many thousands of copies of Schrei were sold. Bill had to face numerous ordeals; his voice was changing. Nevertheless, Tokio Hotel did not stop to perform. At some moments, the vocalist was wheezing or squeaking, but people bought concert tickets anyway. The band’s song “Der letzte Tag” surpassed hits of Bon Jovi and Rolling Stones in some charts.

In 2007, the album Zimmer 483 came out. Tom Kaulitz created one of the songs, “Reden,” that confirmed his image of a womanizer: there were some hints about a crazy night with a girl. Several months later, Schrei was translated into English: the album Scream was released.

Rumors had it that Tokio Hotel was going to present Germany at Eurovision. Eventually, the duet Alex Swings Oscar Sings whose members did not keep their sexual orientation secret performed in the final.

The 2009 album Humanoid was also released in two languages. Nevertheless, it was not popular among music critics. The group changed the genre and added more electronic sounding to the music.

It took the musicians five years to create the next album. The Kaulitz brothers took part in fashion shows: Bill appeared on the runway at the Dsquared² show, and Tom collaborated with Reebok. Besides, Vogue published the twins’ photos on its cover, and they also worked on the commercial for Audi.

In 2014, Kings of Suburbia came out. The large tour in Europe, Asia, Latin America, and the United States followed.

In 2016, Bill Kaulitz worked on his solo career and presented the album I’m not OK. The next year, the new studio album of Tokio Hotel, Dream Machine, came out. However, it did not rise higher than number five in the German music charts.

The group did not cease to exist after the fifth album. In March 2018, the tour supporting Dream Machine finished, and the musicians took a break.

Judging by the recent Instagram posts, Bill participates in fashion shows and works on his own clothing line, and Tom arranges his life with Heidi Klum. In March 2018, the first photos of the couple were published: they were leaving a restaurant in Mexico. Later, the paparazzi often caught the lovers when they were spending their weekends together.

Unlike the twins, Georg Listing and Gustav Schäfer have settled down; they spend their free time with their families in Magdeburg. 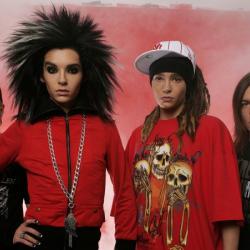