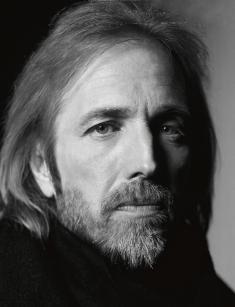 Tom Petty is an American rock musician, whom critics called a bright representative of the classic style of this genre of music. As the vocalist of the band the Heartbreakers, the singer performed on stage for several decades. His music was called the "logical continuation of the legacy" of the most famous rock bands.

Thomas Earl Petty was born on October 20, 1950, in a small American town of Gainesville, located in Florida. The boy's passion for music became a matter of chance. His uncle was a part of the filming crew of the movie Follow That Dream, which was in production in 1961.

Elvis Presley starred in the motion picture. Little Tom was brought to see a celebrity, and when he saw the idol of millions, he was forever obsessed with the style of rock and roll. At that time, America literally lived for this musical style, so such an interest of the guy was reasonable.

At first, music was just a hobby, and Tom did not dream of climbing the heights of this field. The Ed Sullivan Show, broadcast on February 9, 1964, changed the situation. The guests of the episode were The Beatles.

Petty was very impressed after watching the episode of the show. His world view changed. The teenager began to learn to play the guitar. He took his first lessons from Don Felder, who later became a member of the legendary band The Eagles.

The apparent decision for Tom was to move from the small town to a big city. Los Angeles seemed to him the most suitable place for self-realization and growing as a musician. It appeared that it was that place where something big and incredible always started.

At first, Petty's band made out of his friends rehearsed in the garage. The band changed its name and performed as The Epics and then as Mudcrutch. Moving to Los Angeles did not bring the rapid growth of popularity expected by the friends, and the band broke up. In 1976, Tom Petty formed a new band, calling it the Heartbreakers. The band members even managed to find money for recording the first album.

The debut album Tom Petty and the Heartbreakers consisted of simple songs easy for the public to understand. They were somewhat different from those songs that were massively released by the rock industry of "new wave," so the rapid growth of the popularity of the band came out of the blue. The band's second record, You're Gonna Get it! was received by the audience enthusiastically. For a long time, it held the top lines of the charts of the United States and Great Britain.

The band's third album, Damn the Torpedoes, released in 1979, sold two million copies, that was an absolute success. The performing style of singer Tom Petty was often compared with the manner of Bob Dylan and Neil Young. Speaking about his work, critics also mentioned Bruce Springsteen.

Such statements appeared for a reason because in the 1980s the Heartbreakers were Bob Dylan's accompanists, and this fact could not but affect the work of Petty. In his songs began to appear details and elements that weren't previously used by the musician. Several musical compositions were recorded together with Bob Dylan.

Gradually Tom Petty became one of the best-known rockers of the country. He was invited to join the band The Traveling Wilburys, which consisted of Bob Dylan, Roy Orbison, George Harrison, Jeffrey Lynne, and himself. For a guy from a small town, it was a massive turn in his career. The band's songs, including "End of the Line," became real hits of the era.

Since 1989, Tom Petty moved on to start a solo career. The musician released three solo albums. The first of them was the album Full Moon Fever. Since the 1990s, Petty collaborated with producer Rick Rubin and in 1994 presented the album Wildflowers. The third album of the rock musician, Highway Companion, saw the light after twelve years. At the same time, Tom actively worked with the Heartbreakers.

Fans and critics have noted that Tom Petty's music is a perfect mixture of quality, inspiration and poetic style. That is why each album, produced by the musician as his solo work or in co-creation with the band, was commercially successful and enjoyed the attention of the audience. The Heartbreakers toured and performed all over their home country and abroad.

In 2014, the band released their twelfth album, Hypnotic Eye. The record took the first place in the Billboard 200 chart. In 2017, the band gave a big tour of the United States, marking forty years since the release of the first album. Tom Petty at that time was 66 years old, but he didn't lose the ability to create a fantastic atmosphere of good old rock ' n ' roll on stage as well as in the audience.

Petty was among the musicians who criticized the situation in the show business relating to rock music. The singer repeatedly noted that the crisis emerging in this genre was connected with the commercial side of the industry, which had an increasing power in comparison with the value of talent. The performer described the difficulties in working with radio stations, firmly believing that the reasons for the problem were the commercialization and lack of independent broadcasting channels.

In memory of the music fans of the Heartbreakers a documentary film by Peter Bogdanovich, named after the band's hit song, "Runnin' Down A Dream" was released.

The biography of the rock singer was connected with love experiences that somehow left a mark on his music and brought him inspiration. Tom Petty was married twice. The divorce from his first wife Jane Benyo was a difficult time for the singer. His colleagues and friends were afraid that the musician would try to find comfort in alcohol and drugs, but Petty was stronger than that.

He went out of town and lived through a difficult life situation alone with himself and his own feelings. The result of his thoughts was the lyrical record Echo. It is interesting that while the author considered the songs from this album to be dark, the audience believed them to be life-affirming.

After some time, Petty married for the second time; Dana York became his wife. The musician cheered up and considered himself a happy man. His music was still in demand, his family was strong, and he loved his work. The singer did not speak about his personal life, so there is no detailed information about his wife and children.

Tom Petty died at the age of 66. Death caught him on October 2, 2017. His relatives found the musician on his last legs in his house in Malibu. The singer was taken to hospital, where doctors tried to save his life, but it was impossible.

Life support system could hardly save the life of the rock star, and it was decided to turn it off. The musician died, surrounded by his close ones. The cause of his death was a heart attack and cardiac arrest.

Today, Tom Petty's photos are featured in articles on rock music of the 1990s, citing his compositions like "Keep A Little Soul" and "You Got Lucky" as an example of the classics of this genre.