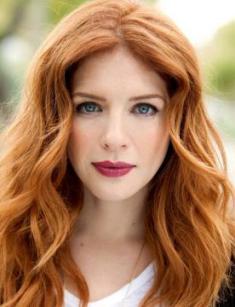 Rachelle Lefevre is a captivating actress from Canada known for her role of the beautiful vampire Victoria in the popular youth saga Twilight. Besides, the artist has participated in other exciting projects.

Rachelle Marie Lefevre was born on February 1, 1979, in Montreal, Quebec, Canada. The mixed origin gave her unusual beauty: the father had French and Irish roots, and the mother was Jewish. The father was a teacher of English; the mother worked as a psychologist.

The girl grew up with three sisters; the stepfather, who was a rabbi, brought them up.

The child showed linguistic talents early; she could speak French and English. After graduation, Rachelle began to study Literature at Dawson College and also participated in theater performances at the Walnut Hill School in Natick, Massachusetts. Further on, Lefevre enrolled at McGill University and continued to study literature.

Before Rachelle came to cinematography, she tried herself in several spheres: a waitress in a sushi restaurant and a producer at a local TV channel. One day, the future celebrity was lucky to meet a producer; he was her client.

He was mesmerized by the woman’s beauty and offered her to auditions for a new sitcom. Lefevre had no professional portfolio, so she brought Polaroid pictures; they were bright and thrilling. Lefevre received a part in an episode.

In 1999, the actress was invited to the Canadian youth series Big Wolf on Campus. She got one of the lead parts, the main character’s friend, but played only in the first season. Just like her character Stacey Hanson, Rachelle entered a college and had to stop shooting. Still, it was the first significant appearance on the screen.

In 1999-2002, the artist continued to play episodic parts. 2002 brought a notable part in George Clooney’s Confessions of a Dangerous Mind; Picking Up & Dropping Off with Scott Wolf followed in 2003.

The next year, the artist moved to Hollywood and collaborated with Penélope Cruz in the drama Noel. The actresses had another chance to meet at a movie set of Head in the Clouds (2004). The year ended with the thriller The River King.

2005 was marked with many TV series, including the iconic project Charmed and Bones.

In 2007, the invitation to the bestseller Twilight changed things dramatically; the book was immensely popular, and the screen version promised to be equally recognized. The actress personified Victoria, a member of the nomad vampire clan. As long as producers read Lefevre’s letter, where she described her interpretation of the character, they had no doubts who was going to play Victoria. Rachelle saw her as the pure evil, yet beautiful and cat-like graceful.

The artist developed the image on her own: costumes, hairstyles, makeup; she watched many videos about wild lionesses, whose nature was similar to that of her character.

The project was a success; the ratings all over the world were incredibly high. Thus, the rest of Stephenie Meyer’s books were going to be adapted to the screen. The next year, in 2009, the second part The Twilight Saga: New Moon was premiered. However, the situation about the third movie got ugly.

Suddenly, producers replaced the actress with Bryce Dallas Howard; both fans and Lefevre were surprised. Protests on the Internet were organized: people wanted the favorite actress to come back to the saga. The studio gave the official answer: the reorganization was held to keep the director’s artistic vision and the plot.

It was not the end of the world for Lefevre. She attended the premiere of The Twilight Saga: Eclipse, even though it was hard emotionally: Rachelle had worked on this character a lot.

Further on, the artist continued to participate in other projects. In Barney’s Version, she personified Barney Panofsky’s wife, suffering from depression. The same year, the woman replaced Brittany Murphy in The Caller. Under the Dome starring Mike Vogel was another notable work in 2013.

In 2009, the woman dated Jamie King, but there has been no information about her boyfriend ever since. Rachelle often posts on Twitter and Instagram, but no hints about her husband or children can be found.

The actress is on friendly terms with her colleagues, Ashley Greene and Kellan Lutz; she lives in Los Angeles. Besides, Lefevre is a social activist and supports children’s and animals’ rights. Her height is 5.51 feet (168 cm.), and her weight is 136.69 lbs. (62 kg.).

Today, the actress continues to appear in movies and series. One could see her in the TV series Proven Innocent premiered in February 2019.