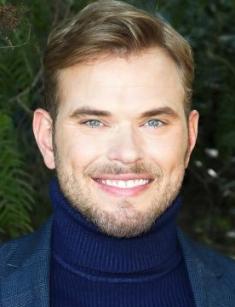 Kellan Lutz is an American actor and model, the face of world famous brands. In his youth, he left college for the sake of his beloved profession. He did not waste on fortunetelling because famous directors cast the young man in the leading roles. Lutz rose to prominence after participating in the vampire saga Twilight.

Kellan was born in a large family. His parents raised six more children. The boy spent his childhood in Arizona. The actor says that the mother still follows the tradition of home hospitality. When children come home, the table is full of tasty dishes. He admits that it makes him wonder about his childhood years, and he feels like a little boy.

As a schoolboy, Lutz lived in the Dominican Republic for a semester, where he became acquainted with the culture of the republic and learned the Spanish language. As a teenager, he won the World Billiards Championship.

Kellan began his career at the age of 13. The handsome, tall guy (now Lutz is 6.07 ft. (185 cm) tall, weighing about 176.37 lbs. (80 kg)) began to earn his first money in the modeling business. Later, he became the face of the perfume brand, Elizabeth Arden, filmed in music videos of singer Hilary Duff, Hinder and Matchbox 20, which brought him first popularity.

When the boy was 18 years old, he dropped out of college, which shocked his parents. Lutz preferred his film career, and he admits that he has never regretted this decision:

"At that time, my heart demanded it."

The young man said in an interview that but for an acting career, he would have become a Navy special forces officer.

Kellan Lutz went to Los Angeles, where he made friends with novice actors. The dream was closer than he thought. Soon he made his debut in television projects. The young man appeared in the episodes of the series The Bold and the Beautiful, Six Feet Under, The Comeback. The young man also appeared in the favorite teen TV show 90210.

He made a feature film debut portraying a character named Frank in the movie Stick It (2006), in which Missy Peregrym, Jeff Bridges, Vanessa Lengies became his colleagues on the set. He was immediately offered to play in Steve Pink's comedy Accepted.

The young actor combined movies with theatre. The schedule was very tight because Kellan appeared in 3-4 films every year, but he got only minor roles.

2008 was a turning point in his career. Lutz was cast in the role of vampire Emmett Cullen in the Twilight saga. The young actor attended the audition immediately after shooting in the movie Generation Kill, which lasted seven months. Handsome Kellan was first offered a title role in the film adaptation of the novel by Stephenie Meyer, Edward (eventually played by Robert Pattinson).itl

However, Lutz did not want to play the depressive protagonist; what a difference was Emmett, a fearless, indestructible lucky one. The young man portrayed this character in all parts of the saga, and the last one was released in 2011.

The actor says warm words about the shooting. The participants became friends, and Lutz still maintains relations with Nikki Reed, Taylor Lautner, and Jackson Rathbone. He later played together with Twilight colleague Ashley Greene in the movie A Warrior's Heart.

Kellan's filmography included the roles of Dean Russell in the remake of the horror film A Nightmare on Elm Street (2009) and Poseidon in Immortals (2011). Finally, director Jonah Loop cast Lutz in the leading role in the action movie Arena, in which the characters are forced to entertain Internet users fighting against each other in gladiatorial combat. The film also starred Nina Dobrev, Samuel L. Jackson, Katia Winter.

In 2011, the young man first came to the capital of Russia to promote a new comedy entitled Syrup. In this film, Lutz is in the spotlight again. A few years later, the man portrayed the legendary son of Zeus in the action film The Legend of Hercules.

In the story, protagonist Barney Ross (Sylvester Stallone) recruits a new team, The Expendables, to defeat the longtime enemy.

Later, the young man portrayed the famous actor and writer, William Shatner, in the biographical film Experimenter (2015), starred in the 2016 fantasy movie The Osiris Child about space colonization.

The actor does not hide his relationships. Kellan had an affair with actress AnnaLynne McCord, who auditioned for the role of Rosalie Hale in Twilight. Then the young man dated the screen star and dancer, Sharni Vinson. He also had a relationship with Kayla Ewell who appeared as Vicki Donovan on the TV series The Vampire Diaries.

There were rumors about Lutz and singer Miley Cyrus’s love affair, but the actor refuted speculation in one of the television programs. At the Academy Awards ceremony in 2014, the young man walked arm-in-arm with the Ukrainian model and actress, Olga Kurylenko.

In autumn 2016, on Instagram, the star of Twilight began posting photos of a charming girl, TV host and model, Brittany Gonzalez, and a year later the couple announced their marriage.

Kellan is fond of sports such as basketball, tennis, baseball, skateboarding. He loves to swim in the pool, go skiing or train in the gym. The actor's hobby is drawing. Friends know Lutz as a very positive and kind person. He knows how to cheer up and says:

“I love life way too much and find fun in almost anything. I'm a chameleon.”

In 2010, People magazine ranked Kellan Lutz number 3 on the list of the sexiest men in the world. The actor continues his modeling career; he is the face of Calvin Klein.

In January 2018, the adventure horror film Guardians of the Tomb was released. A team of archaeologists goes to rescue their lost colleague and must battle their way through the ancient dungeons, inhabited by smart man-eating spiders. Kellan Lutz landed one of the leading roles in the film.

The actor has starred in the drama Speed Kills, which is scheduled to premiere in August. His colleagues on the set were John Travolta, Jennifer Esposito, Katheryn Winnick. Kellan also plays the leading role of Toland in the action-thriller The Feud, the second season of this series is being filmed.

Kellan Lutz has a net worth of $5 million.