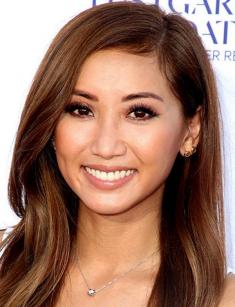 Brenda Song used to be a popular child model and the Disney channel star who debuted at the age of seven; the audience remembers her role in the series Fudge. The actress had a career breakthrough after the role of London in series The Suite Life of Zack & Cody. While the woman’s filmography is not much extended, she is a promising Hollywood star who also works as a producer and a model.

Brenda Julietta Song was born on March 27, 1988, in Carmichael, California. Her father, a school teacher, belongs to the rare Hmong people; the mother is a housewife from Thailand. The actress has two younger brothers, Timmy and Nathan.

The girl was interested in dancing and dreamed of ballet; the younger brother wanted to do taekwondo. However, the parents could not allow themselves to take two children in various clubs, so both went to taekwondo classes. Little Brenda felt annoyed and cried. However, she can boast a black belt today.

Still, the six-year-old girl convinced the mother to go to Los Angeles with her and touch the world of cinematography. Suddenly, Brenda entered the children’s commercial industry. The mother and the daughter stayed in the city for two years; further on, the rest of the family joined them.

Brenda was busy with her work and had to be home-schooled; she passed the exams and received her education at 16. The young talent attended a training course and entered the University of California, Berkeley to study business psychology; she graduated in 2009.

Brenda’s career began with a casting agent noticed the charming little girl in a shopping center. Soon, the child got a role in a commercial for Little Caesars pizza restaurants; other companies invited her as well.

In 1995, the girl received a tiny role in the short movie Requiem. She looked so confident in front of cameras that the whole crew applauded. Later on, Brenda appeared in two episodes of the popular series Thunder Alley and got the permanent role in the new season of Fudge.

Until 2000, the actress appeared in some eight movies and TV projects; she was pretty recognizable. In 2000, Brenda won her first prize, Young Artist Award – Best Performance in a TV Movie (Comedy), Supporting Young Actress for the role of Samantha Kwan in the TV movie The Ultimate Christmas Present. Besides, her parts in The Bernie Mac Show and 100 Deeds for Eddie McDowd were quite significant. In 2002, Song signed a contract with Disney and turned over a new leaf in her life.

The Disney debut happened in the adventure movie Get a Clue where Brenda co-starred with another child actress, Lindsay Lohan. In 2004-2005, fans enjoyed the artist’s acting in the series Phil of the Future about a boy who went to modern America from 2121.

Soon, the young woman appeared in the sitcom The Suite Life of Zack & Cody. This teenage series shows the life and funny adventures of the twins, Zack and Cody (Cole and Dylan Sprouse).

The boys live in a luxurious hotel; the daughter of the hotel owner, London Tipton, is their friend. The girl is glamorous and eccentric; she is kind-hearted but quite capricious. She is said to be the parody of the socialite Paris Hilton. The project proved to be a tremendous success: four million viewers watched it. Brenda turned into a star and won Young Hollywood Awards in 2006 and The 10th Annual Crown Awards in 2009 when the show finished.

The audience had some more chances to see their favorite London: Song participated in the series The Suite Life on Deck and the movie The Suite Life Movie based on the original series.

In 2010, the actress debuted in the significant project, David Fincher’s The Social Network. It is a biographical drama about the creation of Facebook. Brenda’s character, Christy Lee, is the friend of the Harvard students who founded one of the most popular social networks worldwide. The movie was the leader in the United States and top-grossed all over the globe; the actors received much fame.

In 2012, the artist had one more chance to demonstrate her drama talent: she played in the short movie First Kiss with Joseph Mazzello. Many American festivals presented the project; it won two prestigious prizes. At the same time, Song became a guest star in the political thriller Scandal on ABC.

2013 brought the lead part of Veronica in the series Dads. It is a comedy about two childhood friends, Warner and Eli, who are successful business partners. Veronica is their assistant; crafty and tactical, she gives them pretty much trouble.

In 2016-2017, the artist played another main character, Angie Cheng, who saves her mother from cancer, in the series Pure Genius. It is the story about James Ball, the billionaire who wants to build a super clinic to heal up patients with incurable diseases.

There is no much information about the actress’s personal life. In 2011, the woman began to date the musician Trace Cyrus who was a year younger than her. Tabloids spread rumors about Brenda’s pregnancy, but her mother denied them.

The couple seemed to have a complicated relationship: the young people used to be engaged but split up twice, in 2012 and 2014. The second time was the last one.

In 2017, the celebrity got another boyfriend, the actor Macaulay Culkin. Many fans hope he will become Brenda’s husband soon.

Nowadays, the star is babysitting for her niece who has been born recently. She posts some photos with the baby, as well as personal pictures in swimsuits and evening dresses, on her Instagram page. The actress’s height is 5.15 ft. (157 cm.).

The series Station 19 is one of Brenda’s recent works. She played a music critic JJ who was saved by Dean, the firefighter. The accidental meeting transforms into love.

In 2019, the new movie Secret Obsession will be released; Brenda will play Jennifer Williams. Another project, Changeland, is also in post-production now.