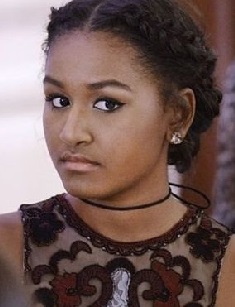 Natasha (often called as Sasha) Obama is the youngest daughter of the former U. S. President Barack Obama and Michelle Obama. Currently, she is ending her school education, and entering the University of Michigan is included in her plans for the future.

Speaking about Obama's life at home, it is very scheduled and busy. In one of the interviews, Michelle and Barack said that there was a lot of discipline in their house. Girls have chores such as setting the table, and so on; they have a lot of to-do things. Malia has been doing some soccer, dance, and drama, and Sasha was occupied in gymnastics and piano.

However, Sasha’s home life is not only strict but also has some nice and pleasant moments. At the election, President Obama said in his victory speech that he was going to get a puppy to the White House because his daughters always wanted a dog. By the way, it is common for the U. S. Presidents to get a friend – a pet that lives with them in the House. The process of choosing a pet was a little slow because Malia is allergic to animals, and the choice needed to be right. In April 2009, Sasha’s family adopted a Portuguese Water Dog that was given to them as a gift by the U.S. Senator from Massachusetts, Ted Kennedy.

The six-month-old puppy was named Bo, and the White House started referring to Bo as the First Dog, which is really sweet. When Sasha and Malia were growing up, they had less time for their pet, who was "getting lonely," as Barack Obama noticed. So, in 2013 the Obamas adopted another Portuguese Water Dog, who was named Sunny.

Besides allowing having a dog, the Obamas gave their children the opportunity to travel a lot. In the interview with Forbes, Mr. Obama claimed that, firstly, the most memorable trips were the ones with his kids, and, secondly, travel made people grow.

Before moving to Washington in 2009, both sisters studied at the private University of Chicago Laboratory School. Before the election, they had some mixed feelings, and that is understandable – they are kids, after all. Sasha was afraid if she would lose her current friends and never find new ones, etc. In 2009, Sasha and Malia went to the Sidwell Friends School in Washington, D.C., where Malia graduated in 2016, and Sasha is going to end her education this year.

Recently, on her Instagram, Natasha posted the photo where she shared her positive emotions about going to college and tagged the University of Michigan. However, she was also accepted into Yale University, so we better wait for her graduation from school and see what she will choose.

In 2016, Sasha, together with her sister, mother, and grandmother, Marian Robinson, went to the six-day trip to different places, including the Republic of Liberia, Morocco, and Spain. They promoted the Let Girls Learn Peace initiative, for which the United States has funded $27 million. The point of this program was to help the millions of girls who have a lack of access to formal education.

Besides education, Sasha has been working too. In 2016, she took a summer job at Nancy's, a seafood restaurant in Martha's Vineyard, Massachusetts. She had a lot of casual duties like cleaning the tables, serving at the takeout window, etc. Parents support their daughters and want them to be raised as normal as possible. Sasha’s sister has also been occupied in various fields. In summer 2014 and 2015, Malia worked at the television studios in New York and Los Angeles. In summer 2016, she was an intern in the U.S. Embassy in Madrid, Spain.

At present, it is unknown whether Sasha has a boyfriend or not. In 2017, at the Chicago’s annual Lollapalooza music festival, where she went with her sister, Sasha was seen kissing a mysterious guy named Matt Metzler. Later, it was confirmed that these two were not dating. Generally, Sasha has never officially announced whether she is in relationships or not, so we do not know if someone owns the heart of this young and beautiful lady.

Speaking about Sasha’s friends, one of the closest ones is Maisy Biden, the granddaughter of Joe Biden, who has been the 47th vice president of the United States in 2009–2017 and also a good friend of Barack Obama. Sasha and Maisy have been friends since their families joined political forces, and even had their independent trip to Miami in 2017, where they were having sunbaths in bikini and relaxing. Besides, they attended the same school and played on the same basketball team.

As a kid, Sasha has really liked the singer Beyoncé and attended her concerts in Chicago in 2014, Baltimore in 2016 and Paris in 2018 with Michelle and Malia Obama. And at present, Sasha still loves Beyoncé’s works, but it is not the only American artist that inspires the teenager. In 2018, she was seen hanging out with a hip-hop artist, Cardi B. Another singer that Sasha likes is Willow Smith, a daughter of the actor Will Smith.

She performed at the annual White House Easter Egg Roll. Drake is the man who is known not only by Sasha but also by her father, Barack Obama, who even called the rapper "unbelievably talented." When Natasha was on her vacation in Miami in 2017, she was spotted wearing a baseball hat with Drake's OvO logo on it. Drake posted Sasha’s photo with this hat on his Instagram and called her “Style Popper."