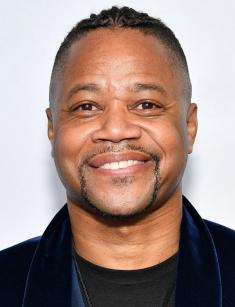 Cuba Gooding Jr. is one of the actors whose natural talent arrests sight of many fans and makes us keep a close eye on his acting career. Notable to the viewer for his several central roles, the man continues to win awards such as Oscar, Emmy, Satellite and many others. Cuba Gooding Jr. has successfully played roles of both minor and major: from invincible players, courageous police officers to notorious criminals.

Cuba Michael Gooding Jr. was born on January 2, 1968, in The Bronx, New York City to musicians’ family. His mother Shirley (Sullivan) is a singer with the Sweethearts, and his father, Cuba Gooding Sr., was a lead vocalist of the soul group The Main Ingredient. Besides, Gooding has three siblings: April, Omar, and Thomas. His paternal grandfather, Dudley MacDonald Gooding, was a native of Barbados.

His family moved to Los Angeles in 1972 after his father's music group had their hit single “Everybody Plays the Fool." Two years later, the elder Gooding left the family because of the popularity going to his head. Gooding’s mother raised all the children.

Because of frequent changing places, the boy attended four different high schools: North Hollywood High School, Tustin High School, Apple Valley High School, and John F. Kennedy High School in Granada Hills in Los Angeles. Due to his easy-going nature, Gooding served as class president in three of them. He became a born-again Christian at the age of 13.

Cuba's talent for artistry and melodiousness was given to him from his parents. Gooding's first job as an entertainer was as a breakdancer, performing with singer Lionel Richie at the closing ceremonies of the 1984 Summer Olympics in Los Angeles.

After graduating from high school, Gooding studied Japanese martial arts for three years, before turning his focus toward acting. The young man took a few acting classes but did not spend much time on vocational education and training. Early on, he landed his first guest-starring role on show Hill Street Blues (1981).

Cuba Gooding Jr. made his big screen debut in Coming to America based on a story originally created by Eddie Murphy, who also starred in the lead role, in the 1980s.

After having appeared in small guest roles in TV series such as sitcom Amen (1988) and action-adventure MacGyver (1988, 1989 and 1990), Gooding boosted his acting career with the 1991 American inner-city crime drama film Boyz n the Hood which was directed by John Singleton. Cuba played the lead role of Tre Styles, one of the three best friends, who are consumed by the criminal world of South Central Los Angeles. The film stars are also Laurence Fishburne and Ice Cube. The movie was a box office surprise and critical hit, and it was nominated for Oscar two times, however, did not win it. In 2002, the United States Library of Congress deemed the film “culturally, historically, or aesthetically significant” and selected it for preservation in the National Film Registry.

Followed the success after Boyz n the Hood, Cuba Gooding appeared in the sports drama fіlm Gladiator (1992). The film tells the story of two teenagers trapped in the world of illegal underground boxing. One (James Marshall as Tommy Riley) is fighting to pay off gambling debts accumulated by his father. The second (Cuba Gooding Jr. as Abraham Lincoln Haines) is fighting for the money to get out of the ghetto. While being exploited by a boxing promoter, the two teens become friends.

This drama movie directed by Rowdy Herrington is a contradiction of the statement "Sport is life." Unfortunately, Gladiator was critically panned; it grossed only $9.2 billion at the box office against a $20 billion budget.

In 1996, Cuba Gooding reached a new level of prominence when he was cast as an arrogant yet charismatic football player in Cameron Crowe's blockbuster romantic comedy-drama sports movie Jerry Maguire (1996), which was a major critical and commercial success and was nominated for the Academy Award for Best Picture. With co-star Tom Cruise as Jerry Maguire, a glossy sports agent who lost his job, but, despite the misfortune, the man pulled out of his hat the talented wide receiver Rodney “Rod” Tidwell. Most significantly, Gooding earned an Oscar, Satellite Award and Screen Actors Guild Award for Best Supporting Actor. His exuberant “Show me the money!” line in the film became a nationwide catchphrase. Additionally, his Oscar acceptance speech has often been cited for its enthusiasm. The film was a financial success, bringing in more than $273 million worldwide, against its $50 million budget.

Some of his best-received performances include turns in films such as the US Naval drama Men of Honor (2000), in which he played the lead role of Boatswain's Mate Second Class and co-starred with Robert De Niro. Only because of Gooding’s skin color, some of the opportunities to actor’s great future were closed. Gooding also received attention for his roles in the epic Pearl Harbor (2001) as Doris Miller.

Since then, in high contrast to earlier stages of his acting career, Gooding has appeared in many more gritty, critically ignored, direct-to-DVD films than theatrical or television releases. For example, a well-received performance as Ben Carson in Gifted Hands: The Ben Carson Story (2009). The film is based on the autobiography of a neurosurgeon (and later politician) Ben Carson, the pioneer performing the only successful separation of conjoined twins joined at the back of the head. In the following years, Cuba Gooding Jr. appeared in several movies, a few of which were huge hits such as Wrong Turn at Tahoe (2009), Ticking Clock (2011), The Hit List (2011) and others.

The 2014 Oscar-nominated historical drama film Selma became special for Gooding’s career. The film is based on the 1965 Selma to Montgomery marches that took place from Selma, in Alabama, to the state capital of Montgomery. The purpose of the march was to highlight racial injustice against African Americans. In continuation of the African-American theme, the actor appeared in the TV miniseries The Book of Negroes.

Gooding portrayed O.J. Simpson, a former running back and actor, who was charged with the murders of his ex-wife and her friend, in the anthology series American Crime Story: The People v. O. J. Simpson. The show was a success and received several awards.

The actor returned to the role of sportsman in 2018 directorial debut, drama Bayou Caviar.

In 1994, Gooding married his high school sweetheart, Sara Kapfer, with whom he has three children: two sons, Spencer and Mason, and a daughter, Piper. The actor often appears with the children on the red carpets.

In 2014, Kapfer filed for legal separation from Gooding. Gooding filed for divorce in January 2017. Cuba told about his personal life in a talk show:

Now the Gooding’s divorce is not yet drawn up, and it is not clear whether the process will be completed: sometimes there are photos in the press on which Cuba and his wife look very happy.

In 2019, the drama movie Life in a Year will be the premiere, in which Cuba Gooding Jr. will star a minor part.

The picture follows 17-year-old Daryn who finds out that his girlfriend is dying. He sets out to give her an entire life in the last year she has left.