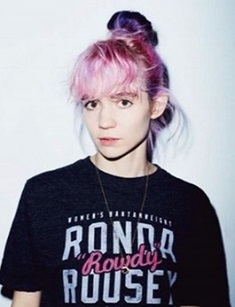 Grimes is a Canadian musician, singer, artist, and producer, whose voice is often called cosmic and magic, and songs – the music of the future. The unusual fusion of different styles and details, the perfect soprano and the delicate taste make Grimes a unique person in show-business.

Singer's real name is Claire Elise Boucher. Future star was born March 17, 1998, in Vancouver, British Columbia, Canada. Her mother, Sandy Garossino, is a famous Canadian prosecutor and social worker. Claire's maternal grandmother is a Ukranian. From the very childhood, Grimes heard her grandparents speaking Russian, and herself managed to learn it a little bit.

Later she often reminded about her Russian roots in the songs. For example, on the cover of “Visions” album, there are written words in Russian “Ya tebya lyublyu” (I love you) and the quote from the Song Of The Last Meeting by Anna Akhmatova, one of her favorite poets.

At one of her concert woman sang the poem I Loved You by Alexander Pushkin. In February 2019 she sang Yanka Dyagileva's, Russian songwriter, work I Repeat Ten Times And Again.

Being a child, Claire studied at a Catholic High School in Vancouver. Having graduated, in 2006, she entered the oldest educational institution in Canada – the McGill University, Montreal.

For a long period, the girl couldn't understand which branch to choose for studying. She had always been interested in science, art, and literature, but her final choice was the faculty of neurobiology.

Studying at the University, Grimes became interested in music. In 2007 she started performing in Montreal's clubs as DJ Grimes. Her favorite repertoire was hip-hop, rock and electronic music.

Doing experiments with different music styles and directions, the girl, at last, found her own unique sound. She arranged modest concerts at the old abandoned fabric in Montreal's countryside with other young musicians and recorded two songs of her own composition which were included in the Canadian Electronic Music Album 2009.

Inspired by Frank Herbert's book “Dune” and by other fiction writers, in 2010 Claire released two albums on the Arbutus Records label.

“Geidi Primes” and “Halfaxa” didn't bring growing star popularity, but made other singers pay attention to her and note her unique identity, perfect pitch, artistry and talent.

In 2011 Grimes dropped out of the University, cause music took her much time. In the spring of the same year, she and Swedish singer Lykke Li went for the North America tour. Later she recorded several songs with a young Canadian Avangard musician d`Eon. In 2012 her third album “Vision” on the label 4AD was released. It earned only enthusiastic review by the most popular musical media. The most popular songs of the album are Genesis and Oblivion

Evan Rytlewski, the “Club” magazine's editor, called album's style as a “depressing electro-pop,” and Matt James from Pop Matters named the album a “real intellectual explosion.” Grimes created the cover for the album using some lines from Anna Akhmatova's poem.

In 2014 Claire released the single Go which she tried to sell to Rihanna. However, the star denied, having said that the composition was not interesting enough for her. According to the editors of the “Rolling Stone” magazine, the song became one of the best songs of the year.

In 2015 Grimes joined the concert tour of Lana Del Rey. At the end of the year, she released “ArtAngels” which she recorded with Janelle Monáe and with Taiwan rapper Aristophanes. The album happened to be the most successful Grime's work. It was not so dark and gloomy (like the previous one was) and more personal and sincere. “ArtAngels” peaked at No.1 in the list of 50 best albums of the year.

Claire passed 2016 in tours across Asia and Europe.

Grimes' music draws on an eclectic mix of styles, including electronic music,synth-pop, R&B, dream pop, and hip hop, and has been described as synth-pop and art pop.

Her work has been likened to various artists, including Björk, Siouxsie Sioux, and Enya.

Apart from music, Claire is a famous artist. Japanese culture Anime inspires her for creating the covers of her albums. Claire's works are exhibited at various galleries.

Also, Claire is keen on clothes design. The woman created the print for t-shirt collection by the famous Yves Saint-Laurent brand.

Moreover, Grimes is a representative of the Louis Vuitton brand since 2016.

Grimes has a lisp. Many people like it, but Claire herself feels embarrassed about it.

Her family was a Catholic one. But, despite it, she adores Marilyn Manson, although his creativity is contrary to religion. Especially the woman likes his clothes and style of singing which has influenced on her own.

The singer has a disease – Akathisia - an unpleasant subjective sensation of "inner" restlessness that manifests itself with an inability to sit still or remain motionless. Because of it, many people consider her to be a junkie.

Radically, she does not wear the clothes with buttons and zippers, cause she feels like an animal in a cage. As daily clothes she prefers ordinary knitting. At the concerts and photo shoots Grimes wear unusual costumes indicating her bright individuality

Grimes has tattoos. The number “8” on her chest – is her lucky number. On the fingers, there are symbols from her favorite film The Fifth Element.

Her parents, as is usually the case, have always strived to control Claire in everything. That's why from the very childhood the musician wanted to become free and do whatever she wants.

At the beginning of 2018, Grimes shared the information about her working on two albums. One of them will happen to be more bright and become the last release in the 4AD label. The second one will be experimental and gloomy.

In May 2018 the singer published the name of her new songs on Instagram. A little later she shared some passages from new tracks 4æm and Adore You.

In June 2018 the audience saw Grimes in the Apple commercial video - Behind the Mac, where she told about the process of creating music, video, and pictures on her MacBook. In the video people also could hear Grime's new song - What's What The Drugs Are For.

At the beginning of November 2018, in Twitter Grimes announced that she had finished working on the cover of her new song. On November 26, 2018, the singer announced its name - We Appreciate Power. Its premiere was on November 29. According to Grimes's words, the North Korean rock band Moranbong Band inspired her for the song.

2018 was successful for Grimes: she took part in music recording with Janelle Monáe, Euringer, Poppy singer and LOOΠΔ. Also, she created a jingle for the cartoon Hilda by Netflix.

In January 2019, British pop-rock band released the song Nihilist Blues which they recorded together with Grimes for the 6th album “Amo.”

On January 10, 2019, the singer published the passage from her new song So Heavy Fell Through the Earth in her Twitter profile. Grimes described the song as “very dark ballad” in the style of nu-metal.

On March 14, 2019, Grimes published the demo of the new song Pretty Dark on her YouTube channel. In the song's description she said that it is not a new single, but a demo version of a song which will be included in her new AR-project. Also, she announced that she had started creating characters for a musical book with expanded reality. The image of one of the characters you can see in the video clip for Pretty Dark. In spite of working on this project, Grimes confirmed that she did not give up singing and kept creating a new album.

On March 19, 2019, Grimes announced a new album called “Miss_Anthropocene” on her Instagram profile. She described the collection as “a concept album about the anthropomorphic Goddess of Climate Change.” She added: «Each song will be a different embodiment of human extinction as depicted through a Pop star Demonology.»

The album release will be in summer, 2019, however, Grimes said that she could publish several singles earlier.

Grimes has an estimated net worth of $5,5 million.

At the beginning of her career, Grimes had a short relationship with Canadian singer and a songwriter Devon Welsh. After their break-up, she met her new boyfriend – musician James Brooks.

In spring, 2018, the world heard about the affair between Grimes and a famous entrepreneur, engineer and one of the wealthiest people in the world Elon Musk. They attended secular events together. Social Media say that Elon means business cause he had introduced Grimes to his children. Her relations with the kids are perfect.

In summer 2018 there was a big scandal between Azealia Banks, Grimes, and Elon Musk. The audience could even think that the couple had broken up.

However, in a recent interview, Grimes said that their relationship with Elon was perfect and they loved each other. The musician's fans are delighted by her choice and consider Musk to become her future husband.

Grimes has four studio albums, such as:

Since the beginning of her career, Grimes has given several tours:

At present, there is no information about her future tours.

Grimes has got a vast amount of awards and nominations. Several of them are: