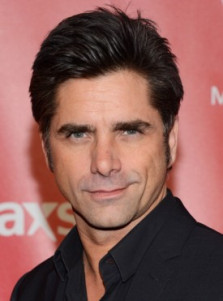 John Stamos is an American actor and musician. He is extremely known for playing in General Hospital, Dreams and Grandfathered. Due to his talent and hardworking, Stamos is one of the most prominent representatives of show-business.

John Stamos was born on August 19, 1963, in Cypress, California to the family of Bill Stamos and Loretta. He is their eldest child and has two sisters. John's dad was s a restaurateur of Greek origin.

Speaking about his education, Stamos studied at John F. Kennedy High School. There he joined the school's marching band and played drums. As a teenager, John Stamos also was involved in his father's restaurant business.

At the age of 4, John Stamos began learning to play drums and the guitar. As a kid, he also created his own band called Destiny. The group had played concerts at some amusement parks and parties.

In 1976 young John Stamos saw his first Beach Boys concert. It inspired him for pursuing a career in music and acting. His parents supported his decisions and encouraged him to achieving goals.

John started his acting career in 1982 – then he got the role of Blackie Parrish in the medical drama General Hospital. Originally, the character was planned to appear for just five episodes, but the audiences loved Stamos so much that his character became a mainstay. For acting as Parrish, the actor was nominated for a Daytime Emmy Award.

1984 brought the celebrity the lead role in the CBS sitcom called Dreams – he appeared there as the aspiring musician Gino Minnelli. The show consisted of just one season.

Fans can see John Stamos playing Jack Klugman in the sitcom You Again? The show was premiered on NBC in 1986, lasted till 1987 and had 26 episodes.

1987 was marked by Stamos' big career breakthrough. So, he was invited to act as Jesse Katsopolis in the sitcom Full House – there he co-starred alongside Lori Loughlin. His character was an exterminator turned rock musician. The series completed 192 episodes before its cancellation in 1995.

In the 2000s, John Stamos got the role of the paramedic/doctor Tony Gates, in the medical drama television series ER. His character appeared for the first time during the Season 13 in 2005. He played there till 2009.

The actor played Karl Lindner in the 2008 television movie A Raisin in the Sun which was based on the play of the same name by Lorraine Hansberry. The picture got immense critical and commercial success and was nominated for the Emmy Award for Outstanding Made For Television Movie.

In 2010 the celebrity played the role of Dr. Carl Howell in the teen musical comedy-drama Glee. Remarkably, the series was very popular and was nominated for 19 Emmy Awards.

He was a part of the recurring cast of the sitcom The New Normal – he acted as Brice in five episodes from 2012 to 2013. He also played a recurring role in the television drama series Necessary Roughness.

In 2011 John Stamos started appearing in a series of commercials for Dannon's Greek yogurt brand Oikos. Also, he appeared in Super Bowl commercial which was aired during Super Bowl 2012. In February 2012, the directors of the new Fox drama Little Brother announced John Stamos would play one of the main roles. The series was created by the writer of Everybody Loves Raymond - Mike Royce, its plot centers around a man who finds out that he has a long-lost half-brother.

In March 2013, the actor got a recurring role on the USA Network drama Necessary Roughness, during season three. So, he acted as bearded Connor McClane, the head of a sports and entertainment management company. In April 2015, Stamos announced the news on Jimmy Kimmel Live! that the streaming service Netflix would be picking up Full House for a 13-episode sequel, titled Fuller House, to start airing on February 26, 2016.

The same year, he started working in the Fox sitcom Grandfathered alongside Josh Peck, Christina Milian, and Paget Brewster. 2016 was marked by John Stamos' role in the movie My Big Fat Greek Wedding 2 and the Fox black comedy series Scream Queens. In the latter, Stamos played Dr. Brock Holt.

In 2016 Netflix presented the inspiring documentary series John Stamos: A Human, Being.

Stamos can be seen playing Dr. Nicky in Lifetime's former television adaptation of You since 2018.

John Stamos’ net worth is evaluated at around $40 million.

Besides acting, John Stamos is known as a musician. So, he has occasionally performed with his idols, The Beach Boys. In 1992 fans could listen to his song 'Forever' for the band's album 'Summer in Paradise.' Besides, she appeared in the music video titled 'Forever by Jesse and the Rippers.'

In 1994 the celebrity performed on an independent collection Shades of Blue. He appeared on Broadway as The Emcee in Cabaret, and also in Nine and How To Succeed in Business Without Really Trying.

In the 2010s, John Stamos took part in the Broadway revival of Bye Bye Birdie. He was also invited to perform with John Fogerty on the Tampa Bay Rays post-game concert. August 2011 brought him performance in Hairspray at the Hollywood Bowl as Corny Collins, alongside an all-star cast.

In July 2012, John Stamos started performances on Broadway in Gore Vidal's The Best Man as Senator Joseph Cantwell. Stamos reprised his role as Jesse Katsopolis for a 'Jesse and the Rippers' reunion on Late Night with Jimmy Fallon on July 19, 2013.

John Stamos has a wife - an actress Caitlin McHugh. This couple tied the knot on February 3, 2018. On April 15, 2018, the two welcomed their first child, Billy. Stamos and his wife arranged Billy’s first birthday party in rock style – so, the actor dressed up like Elvis Presley.

It is the second marriage for the actor. His first wife was model Rebecca Romijn (they were married from 1998 to 2005) – their relationship ended in divorce. Romijn went on to marry and have children with actor Jerry O'Connell. Also, John has been in relationships with many women in the past. So, among his girlfriends there were Leah Marsh (they dated from 2007 to 2010), Julie Anderson (from 1991 to 1994), Chelsea Noble in 1987, and Julie Ronnie in 1983.

In spring 2019, Stamos listed his Beverly Hills home for $6.75 million. He lived in the house for 14 years before he decided to sell it. The building was built in the Country French estate style. It has four bedrooms and four bathrooms and sits on a half-acre knoll.

In 2017, comedian Brad Williams parodied John Stamos on his show.