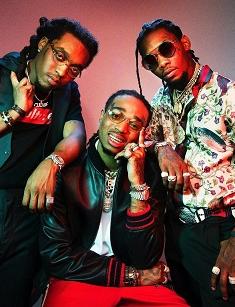 In 2009 three relatives Quavo, Offset, and Takeoff founded their hip hop group, named Migos. All of them are the native of the state of Georgia. Their real names are Quavious Keyate Marshall, Kiari Kendrell Cephus, and Kirsnick Khari Ball. Quavo is an uncle of Takeoff and a cousin of Offset. Most of the songs they record at their home studios, however, they have released three studio albums: “Yung Rich Nation”, “Culture” and “Culture II”. The net worth of the group is $50 million.

Quavious was born in Athens, Georgia. His mother brought him up with his cousin Kiari and his nephew Kirsnick. Quavious studied in school in Lilburn, Georgia. He played football and was a quarterback. In seventh grade he began interest hip hop. At that time, Kiari, Kirsnick, and Quavious started to write their music.

Then they created aliases, which we know today. Quavo decided to connect his life with music, Offset and Takeoff supported him. All of them interrupted the study and left high school to start professional musical careers. So, the newly formed group started to write music and texts for songs. They became very popular in their city and gave a lot of concerts at the local clubs and restaurants and small music festivals, organized by domestic DJs.

Three natives of Atlanta had passed a long way of their development, and in 2009 they founded hip hop group Migos. Still that moment they were known as The Polo Club. The first releases of the group had little success. Their first big project appeared on August 25, 2011. It was a mixtape, called “Juug Season”. Next year the group released “No Label”. However, the group was not popular until 2013.

2013 was a crucial moment in Migos’s development. The trio became known all over the world thanks to their successful single “Versace”. Its producer was Zaytoven, known for his collaborative projects with famous rappers. Migos released a new mixtape on June 13, 2013, and the single “Versace” became its heart. It was included in a lot of different ratings of the best songs. Versace brought wide fame to the group and was so great that Drake made an official remix to it. This fact improved the reputation of Migos, and their fans started to learn other songs of the group along with Versace.

The success of Y.N.G. was a reason for high estimations of experts for the next mixtape. And the group didn’t disappoint their fans and critics. “No Label 2” became the sequel to Migos’s “No Label” of 2012. “No Label 2” appeared on February 25, 2014, and “Fight Night” became the most successful and popular single of it (number 69 of Billboard Hot 100 chart). “No Label 2” was downloaded 100 000 times during the first week after its release. The success of Migos attracted the attention of different record labels. Migos chose 300 Entertainment and signed a deal with it.

November 5, 2014, is a date of next group’s mixtape release. “Rich Nigga Timeline” was recognized the seventh best rap album of 2014 by Rolling Stone. By that moment Migos had won a big fan base. Released on July 31, 2015, new album “Yung Rich Nation” became the last for Migos in cooperation with 300 Entertainment label. Chris Brown and Young Thug took part in the production of that album and created some songs together with Migos. “One Time” was the leading single of “Yung Rich Nation”, which showed a large number of sales. During the first week after its release the album was sold 15 000 times.

There were significant changes in the management of Migos that year. In September trio officially terminated the contract with 300 Entertainment and leaded Quality Control Music by themselves. The group was one of the most popular those days and wanted to earn more money. 300 Entertainment paid rappers about $30,000 – 40,000 for each show, while Quality Control Music increased the money, receiving by rappers, twice. The Migos’s distinctive feature was the fact that they recorded all their songs at their home studios. Each of them spent about 20 minutes for recording his couplet. That year the group reported that want to sing along with rapper Nas.

Quavo and Takeoff created the next two mixtapes of Migos together, without Offset, who was still imprisoned. They were called “Back to the Bando” (September 17, 2015) and “Streets on Lock” (October 22, 2015). The first single of “Back to the Bando” was called “Look at My Dab”. It had very simple lyrics but became known all over the world thanks to its simple dance move, which was repeated by a lot of famous people. “Dabbing” is still popular.

The rapidly growing popularity of Migos led to the fact that Drake reported about his desire to sign the contract with the group. At that time Migos announced the release date and the name of their second album. “No Label 3” was supposed to appear in 2016. The release date had been moved to year because of Migos’s conflict with 300 Entertainment. And the name album came out in winter, on January 27, 2017. It was called “Culture” and became the second studio album of Migos.

The experts rated “Culture” well enough. It immediately headed two main charts of the USA: Billboard Hot 100 and Top R&B/Hip-Hop Albums. It was the first case of Migos when its album topped both charts. The “Culture” got the platinum status and was awarded by RIAA for one million copies sold. Migos took the second place of The 60th Annual Grammy Awards, behind only “DAWN” of Kendrick Lamar. However, Migos became the Best Group of 2017 according to BET Awards and made a noise after party in Miami. All the rappers came there to party this event.

With the growth of Migos popularity, the old stars began to go into the shadows. Some rappers, such as Snoop Dogg, began to critisize the group publically. Even Joe Budden didn’t like the group. Once Migos gave an interview to Budden and his colleagues, and the speech of the trio was so stupid, according to Budden, what he decided to leave the interview right during the shooting. The group was very dissatisfied and even was about to fight.

One year later, on January 26, 2018, Migos released its third studio album “Culture II”. It consisted of 24 tracks. The executive producer of “Culture II” was Quavo. The album repeated the success of “Culture” and became number one of Billboard Hot Top 200 chart. The group started preparing for the tour, choosing the most suitable scenes for it.

The adorable trio was invited to the Met Gala 2018, where they appeared in Versace suits. In July 2018 Migos was the headliners of Exit Festival in Serbia. In 2019 the Migos took to the stage at the Nickelodeon Kids' Choice Awards and started the night with a bang, and performed a medley of their hit songs.

Offset has always had problems with the law, and his life cannot be divided into before and after wide fame. Offset received probation for several thefts before the great success of Migos. Then in 2013 he was arrested for the violation of its conditions and imprisoned in DeKalb Country, Georgia.

The group and their retinue were arrested while the concert in Georgia Southern University on April 18, 2015. The police detected strong marijuana’s smell from the van and arrested 12 persons, who were inside it. Then the police found four handguns there and stopped the concert. After two days, spent in custody, Quavo and Takeoff were allowed to pay $10,000 bail. Offset was denied bail because of his previous problems with the police.

That’s why Migos postponed the appearance of their first studio album. Two weeks later Offset called for riots in prison, attacked another prisoner and inflicted heavy wounds on him. Offset was denied bond again and spent eight months in custody. He made a deal with authorities, pleaded guilty to fueling conflicts in prison, paid $1,000, and was released on December 4, 2015.

After those events, the group didn’t stop to defy the laws. Offset was arrested again on March 17, 2016. He was driving with a suspended license. The police released him the next day but didn’t bring charges. Takeoff became a participant of the conflict at a flight Atlanta – Des Moines. He was asked by a stewardess to place his luggage on the top shelf. Takeoff refused to do it and was forced to leave the plane.

In 2017 rapper XXXTentaction filed a lawsuit against Migos for wounding him and pointing a gun at him. In 2018 Offset decided to ride along in Atlanta but got in a car accident and was hospitalized with minor injuries. In 2019 the police of Georgia got an arrest warrant of Offset. According to video, he slapped a fan’s iPhone.