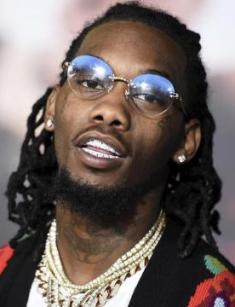 The rapper Offset is the classic example of a bad black guy who has legal issues, accusations, arrests, and great personal scandals. However, none of these troubles makes an impact on his work. Millions of fans were looking forward to his debuting solo album in 2019. Moreover, famous colleagues gladly invite the musician to collaborate.

Kiari Kendrell Cephus was born in December 1991 in Lawrenceville, the suburban area of Atlanta that the writer Margaret Mitchell glorified.

The boy spent his childhood in a small house located in Gwinnett County and attended the Berkmar middle school. This is where he made friends with Quavo and Takeoff; they shared their lunch and treated each other like relatives. Edna Marshall, Quavo’s mother, played a significant role in the future celebrities’ upbringing.

Kiari’s parents met in the 1980s at a local talent show; the boy’s biological father participated there as a dancer. Later, when his son was little, he left the family. The rapper described this challenging period in his works and emphasized that his mother, Latabia, made up for the father’s absence.

As the woman said in her interviews, Kiari spent all the time in the street in his teenage years, and she did everything to stop that. She took him to dance classes, and the young talent was selected to Whitney Houston’s music video “Whatchulookinat”. The singer posted the valuable old picture on his Instagram page.

When the artist earned his fame, he contacted his father to support him financially, but he rejected the offer and hurt his son once again.

“If my daddy called me right now, I'd get on a jet, buy him a house, give him a million dollars, and I won’t talk to him for another ten years. At least I’d know he’s straight”, Kiari told journalists in February 2019.

As a school student, Offset liked sports, particularly soccer. However, his temper was too hot, and teachers sent him to a military school; they saw no other way to control the young man.

In 2008, the inseparable friends Quavo, Offset, and Takeoff took their first steps in music and found the group Polo Club that was renamed into Migos two years later. The debuting mixtape Juug Season came out in August 2011. Versace followed in 2013 and brought the young men recognition; it was included in Billboard Hot 100. Drake himself loved the single and created a remix on it.

A couple of years later, the group presented the first album Yung Rich Nation that reached number three at Top Rap Albums. Famous musicians, such as Chris Brown, contributed to the material. At the same time, the music video “Look at My Dab” made the movement “dab” popular: a dancer puts up their arms bends one of them to hide their face in the elbow.

The second mixtape No Label brought new positive reviews from critics and fans’ love. The following album started with the top position in Billboard 200, and the song “Bad and Boujee” was nominated for Grammy.

While the group art proves to be successful, each member of Migos is actively developing their individual careers and collaborates with other celebrities. In the fall 2017, Offset and 21 Savage presented their album Without Warning; their earlier hit “Ric Flair Drip” was nominated for BET Hip Hop Award. Besides, Offset recorded the single “Taste” along with Tyga.

Cephus is the father of many children; his first kid was born when the musician was only 17. As the rapper confessed later, he panicked when he learned the news: he viewed himself as a boy. Soon, Offset pulled himself together and slipped to the criminal path to provide Jordan (born 2009) with everything. As a result, he received charges in 2012.

The next year, Kiari began to date Oriel Jamie. Their daughter Kody was born in 2015. Today, the father often posts her pictures on Instagram.

The same year, the daughter Kalea Marie from the singer Shya L'Amour was born. The parents celebrated her third birthday in a fairy-tale princess style. Later, the video of the musician and the girl appeared on the Internet: they were shopping for a school uniform and talked about school rules.

The fourth kid, the daughter Kulture, was born on July 10, 2018. The Grammy winner Cardi B was her mother. The parents had married earlier, in September 2017, after Offset proposed to his beloved one during their concert in Philadelphia.

Some six months after Kulture’s birth, fans were shocked to learn that the couple split up because of the husband’s cheating. By the end of January 2019, the spouses made amends, but rumors about Offset’s affairs continue to spread even today.

The singer is known not only for his songs but also legal problems: theft, burglary, drug and arms possession, driving without a license, fights, and inciting to riot in prison.

On Valentine’s Day 2019, the singer presented the debuting solo album Father of 4.

“I cried to myself while I was doing this album ’cause I was talking about my story and my kids. <…> I love my kids, this is who I do it for”, said the artist.

His wife, who contributed to the song “Clout”, could not help crying as well. The video to the last single “Red Room” was very personal: for instance, the episodes of the car crash that almost killed the musician or his dear grandmother’s death.

In March 2019, the singer posted on Twitter the announcement of his next work, Culture III; it is scheduled for 2020.