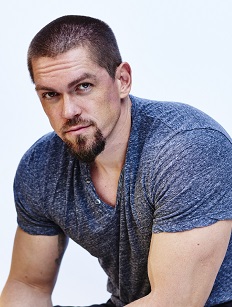 A popular actor with A-1 bad boy reputation succeeded in acting career and entrepreneurship. Today he is also a loyal husband with three kids who changed him much.

He has not trivial childhood in a good sense. The actor grew up in Los Angeles; his family lived on a 67-foot yacht on which the boy traveled all around the world. As Steve recalls, his family hadn't a great fortune, but his parents worked all the time – his dad and mom had an aquarium-cleaning business. Besides his mother worked for a sound company and his father is an acting coach, who hosted Hollywood celebs, Patrick Swayze and George Clooney among them.

His parents always were on their journey, and his kid had to follow them. They changed residences from Catalina to Mazatlán, and the boy had difficulties in finding new friends and adjusting to a new place. He remembers that one day he was hungry and his mother said to him, "Cast a line, Bill! Get a fish!". They traveled in a tiny boat and met 30-foot waves, that's why Steve had to sit in the bunk for three days just coming out to make sure that his parents were still alive.

As a kid, Steve liked brave actors with classic masculinity, humor, and heart. One of his favorite actors who had a significant influence on him were Jackie Gleason and Steve McQueen because they "represent real men-in all of their tragedy and triumph", as Steve says,

"It's the humor of Gleason in “The Honeymooners” and raw grit of McQueen, which both made a big impact on me at a young age. That's what I grew up on, and it's the kind of presence I always aspired to be."

As a teenager, he achieved a basketball scholarship to college. He played basketball two years, but then he realized that this job didn't suit him and he refused to match for athletic demigods. He decided to pursue the career as an actor and attended his father's acting classes.

In Media, he is known as an A-1 bad boy, devilish cowboy, and sports the grin of a Zen master. Before his fame and recognition, the star of "Shameless" participated for six years in a popular sitcom "Reba". As Steve says, he achieved his life goal, when the young actor appeared in this sitcom in 2011, that was his first starring role.

Over the years he notched a bunch of movie roles. Thus, "Shameless" leads the list of his top movies. He also played in "Bride Wars" alongside Kate Hudson and Anne Hathaway in 2009.

In 2011 there was another film with Howey – “Something Borrowed”. Recently he took part in "Making Babies." In 2018 he featured on "Seal Team." Steve gained more popularity thanks to his role of Hopper on the series "Sons of Anarchy."

In 2013 he played a professional football player in an episode of "New Girl."

In 2019 Steve was included in the list "People with Money" where he has taken the first spot. He gathered about $80 million for the previous year. His estimated net worth is $245 million. Besides his acting career, he stocks investments, owns several restaurants, and football team the "San Antonio Angels." Steve launched his brand of Vodka and marketed his fashion line, "Steve Howey Seduction."

The actor has numerous tattoos on his chest, biceps, and arms. He has an athletic body type but has always worked out. He ran two full marathons and a sprint triathlon, the actor keeps a special diet, does yoga, stretching, he also strains his hip muscles lifting weights.

He is married on Sarah Shahi, actress and model. The twosome has three children.

He likes to spend his free time riding a motorcycle, diving for bottle caps. Besides he is a die-hard, his favorite sports are basketball and baseball. The actor has a Harley, but Steve confesses that he hasn't been in it after his twins were born.

The star and his wife are sued by their nanny Alaseri for back wages, harassment and wrongful termination. The nanny said that the wife of Steve forced her to look at a photo with a man’s penis. Besides, the actor berated her when she practiced Islamic customs.

Steve is a supporter of LGBT; he took part in SpiritDay where he was in Purple jacket. Recently he pretended to come out as gay on social media to make a point.

Steve agrees that he is a total romantic in spite of his masculinity and a bad boy's background. He says,

“I thought there was more art in pain than there was in joy. It's the total opposite, right? There's more creativity in giving, in love and acceptance and empathy. You can choose to be a hard-ass, but once you close that fist, good things don't come to you".