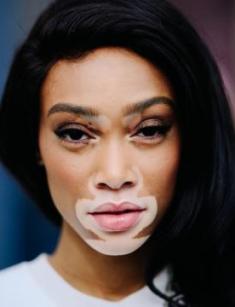 There was some luck in Winnie Harlow’s misfortune. She was born with the rare disease, vitiligo, that changed her appearance dramatically, yet if it were not for the unusual look, she could have remained one of “ordinary” models who failed to conquer the fashion industry.

Today, Winnie Harlow is the spokesperson for the Spanish causal brand Desigual; she advertises bright and incredible clothes along with the Brazilian supermodel Adriana Lima. In the middle of 2018, the Canadian model became a new Victoria's Secret angel.

Chantelle Brown-Young was born in Toronto in July 1994. The parents, Lisa Brown and Windsor Young, had Jamaican roots. The future celebrity’s childhood was cloudless until she turned four when Chantelle was diagnosed with the rare chronic disease, vitiligo, that made skin lose its pigment at some areas.

Soon, the father left the family, and the mother stayed alone with three kids. The would-be model had to face many challenges: classmates bullied her, and the girl had no support from her father. The mockery names “zebra” and “cow” were, perhaps, the mildest.

Later, the star confessed in her interviews she thought about suicide in her childhood and teen years. The friendly kid was just looking for some company, but other children gave her humiliating names, laughed, and even beat her; it was like hell. Chantelle changed several schools and experienced the same scenario: her life was getting impossible. Finally, the mother found the alternative school for other non-standard children like her daughter.

After graduation, Winnie Harlow got hired at a call center that gave her the opportunity to communicate with people without seeing them. Still, the urge to interact did not fade away, even though the earlier experience was so traumatic. Winnie registered on Facebook and posted her pictures there. One day, the famous YouTube star Shannon Boodram noticed the unusual beauty’s photos and invited her to appear in his video. The young woman accepted the offer and tasted fame for the first time. Thus, goal-oriented and strong-willed Winnie proved to her enemies she had the right to be happy and turned her so-called disadvantage into something special.

The road to success was full of hardships. After the video was premiered, Harlow went to many auditions and received as many rejections. The failures did not discourage her. The model got an Instagram page and enjoyed positive feedback; she tried to ignore negative comments and believed in herself.

In 2014, the model, actress, and TV presenter Tyra Banks noticed the Canadian and offered her to participate in the 21st season of America’s Next Top Model. Unspoiled from pennies from heaven, Winnie bought a ticket and went to Los Angeles. She reached the final of the project along with 13 contestants and earned her fame. Although Harlow became only number six and left the show, millions of viewers remembered her. Soon, the Spanish clothing brand Desigual signed a contract with the young woman and made her its spokesperson.

The program was the turning point in Winnie’s life; her career started developing rapidly. The model appeared in men’s magazines, shot for popular brands, and participated in fashion shows in Paris, Milan, London, and New York.

In 2015, Harlow shot for the spring-summer collection of Diesel. The famous British photographer Nick Knight, who had collaborated with Naomi Campbell, Kate Moss, and Bella Hadid, created many professional pictures that showed the woman’s beauty from favorable angles. They increased her popularity significantly; moreover, some people followed in the model’s footsteps.

Glamor Spain and Italy posted Harlow’s pictures on its covers; Cosmopolitan and Ebony did the same in August 2015. Winnie shot for the commercial for Sprite and gave an interview to Vogue Italy.

The celebrity is not only a successful model but also an activist. The painful experience of the past encouraged her to protect people with vitiligo and support scientists working on a treatment. In summer 2011, the woman presented the video “'Vitiligo: A Skin Condition not a Life Changer” and answered the most frequent questions from people who had the same health condition.

In 2014, Winnie Harlow delivered a speech for the American non-commercial fund TED famous for its annual conferences. She talked about living with vitiligo, problems, and social adaptation.

The celebrity is often invited to movies and music videos; one can see her in Eminem’s and Beyoncé’s works, as well as movie episodes. The media call Winnie the icon of style; she is equal to the most popular models in the world: in summer 2017, the beauty visited the Balmain afterparty with Nicki Minaj, Kendall Jenner, Sara Sampaio, and Gigi Hadid.

In summer 2016, fans learned that the woman was dating the famous millionaire and three-time Formula One winner Lewis Hamilton. The paparazzi took a picture of the couple holding hands; the man did not hesitate to show his tender feelings.

In 2015, Hamilton split up with Nicole Scherzinger, the vocalist of The Pussycat Dolls, whom he had been dating for five years. It was a painful break-up for the racer; he confessed he dreamed about a loving and understanding girlfriend. Winnie Harlow seemed to be the one he was looking for.

The Canadian beauty joined Victoria’s Secret Angels in 2018. She was radiantly happy and told journalists:

“I started crying. Literally, I immediately just dropped everything that was in my hand and started bawling”.

Harlow has managed to overcome the complexes related to her non-standard appearance: she often wears revealing clothes that emphasize her peculiar skin. The model visits social events in transparent jumpsuits; for instance, she was wearing one at Christian Dior’s show in Paris when the brand presented its spring-summer collection, and she also celebrated her 24th birthday in a see-through outfit.