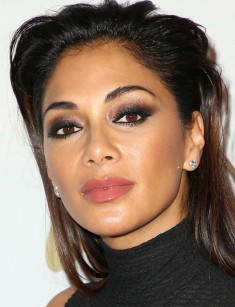 Today, Nicole Scherzinger is the well-recognized R&B and pop singer who has conquered hearts of millions with her fascinating voice. The girl dreamed of performing and managed to achieve her goal due to her persistence and self-confidence. Scherzinger is a dancer, songwriter, photo model, and actress; she earned her global fame in the group The Pussycat Dolls.

The would-be star was born in the capital of Hawaii, Honolulu, on June 29, 1978. The woman’s full name is Nicole Prescovia Elikolani Valiente Scherzinger; it shows her multi-national roots. Her father Alfonso Valiente came from the Philippines, and the mother Rosemary Elikolani had the Hawaiian and Ukrainian origin.

The future star’s parents lived together for several years and divorced in 1981. The mother and the daughter moved to Louisville, Kentucky. In a while, Rosemary married again; the German Gary Scherzinger became the girl’s stepfather. Nicole and her sister Keala were brought up in a strict home: the parents were Catholics.

The girl took an interest in art when she was small. She attended an art school and gladly participated in the local theater performances. As Scherzinger finished school, she entered the Wright State University where she studied acting. In 1999, she quitted to begin the singing career.

Acting and participating in plays helped Nicole to become a back vocalist in Days Of The News. In 1999, the group recorded its second album; soon, Nicole left the group. She was not famous then but obtained the valuable experience which proved to be useful in the future.

Soon, Nicole and Barry Drake created two songs and presented them in 2001. The same year, the young woman starred in Popstar (US) and got an invitation to Eden’s Crush.

The girls were popular among the audience, and their first song “Get Over Yourself” was among the top ten songs in Billboard Hot 100. Other songs were also popular, but the group did not exist for a long time: after London Sire Records closed, the group broke up.

Nicole did not regret she had to leave Eden’s Crush. The work turned out to be too difficult for the young singer: she communicated with the group members every day and experienced a lot of stress. She confessed later that her relationship with other girls was far from being friendly because they thought Nicole was too ambitious and even bitchy. As a result, numerous conflicts were taking place.

In a while, the singer recorded several solo songs under the name “Nicole Kea.” The song “Breakfast in Bed” became the soundtrack to the romantic comedy 50 First Dates. Besides, the young singer collaborated with the composer and songwriter Yoshiki and recorded the song “I’ll Be Your Love” with the Tokyo Symphonic Orchestra.

2003 was marked with the important event: Nicole joined The Pussycat Dolls. She had noticed this group in 2002 when they performed on Late Show with David Letterman. Carmen Electra performed the song “Big Spender” from Bob Fosse’s Sweet Charity; Nicole, who had played Velma in the famous musical Chicago when she was a college student, was impressed.

Initially, The Pussycat Dolls members were only dancers and gave cabaret performances. Sometimes, singers and actresses joined the group to prepare some shows. However, when Nicole appeared, she fitted in perfectly and became the group’s voice and leader.

In 2006, the group started touring; the brunette had the majority of the vocal parties. In this group, she managed to show her abilities, and the audience appreciated her talent. In 2006, Maxim included Nicole in its “Hot 100” (she was number 22 there). In 2008, Scherzinger appeared on the cover of the magazine Men’s Fitness due to her looks (the singer’s height is 165 cm., and her weight is 56 kg.).

Scherzinger not only performed songs but also took part in creating them. Together with Kara DioGuardi, she made the song “I Don’t Need a Man” and “Flirt”; Nicole and Sean Garrett wrote “Buttons.”

However, the talented singer did not limit herself to one project. She regularly recorded new songs with other stars. For instance, in 2005, she collaborated with the actor Will Smith, reggae singer Shaggy, and opera singer Vittorio Grigolo. The next year, Scherzinger recorded the lyric song “Lie About Us” with the American Avant and the cheerful “Come to Me” with Diddy. The music videos to the two latter songs were released, and the audience took an interest in them.

Nicole’s collaboration with various artists did not prevent her from working on the new album of The Pussycat Dolls; Doll Domination came out in 2008. In 2006-2008, the star also worked on her solo album Her Name is Nicole. The song “Whatever U Like” created with the rapper T.I.P. was included there. The song “Baby Love” was the first single; it was popular in Europe and Brazil while the Americans did not like it much.

The official presentation of the album was expected in 2009 but took place only two years later. Many things including the title changed. The renewed album Killer Love had the song recorded with Sting. Fans were also pleased by the remix “Heartbeat” with Enrique Iglesias.

In 2014, Nicole had the second solo album Big Fat Lie released; pop and rhythm and blues genres were combined there.

The talented singer also participated in movies. In 2001, she appeared in the family series My Wife and Kids; the next year, she was invited to the sitcom Half & Half. The comedy Love Don’t Cost a Thing (2003) followed.

In 2005, Scherzinger played in the crime comedy Be Cool starring Uma Thurman, John Travolta, Vince Vaughn, and other actors. Two years later, Nicole took part in the British version of The X Factor; in 2008, she gave the brilliant performance “Pussycat Dolls Present: Girlicious.”

In 2010, Nicole played the role of a Canadian star in the popular series How I Met Your Mother with Neil Patrick Harris, Josh Radnor, and Alyson Hannigan. In 2012, the singer appeared in the action movie Men in Black-3 where she played Lilly, Boris’s girlfriend.

The star tries not to expose her private life, but journalists manage to learn some details. For some time, Nicole was seeing Nick Hexum, the member of the rock group 311. The young people were even engaged, but their marriage never followed.

In 2007, the singer started dating Lewis Hamilton, the talented Formula One participant. From time to time, the young people had conflicts but restored their relationship every time. Nicole was sure Lewis would make an ideal husband for her. However, she jumped to conclusions too early: the relationship lasted for seven years and did not lead to the couple’s marriage.

Rumors had it the changes in the star’s personal life made her change her appearance: she had the shape of her slightly curved nose. Fans often compare the photos of the woman before and after the surgery trying to comprehend whether these stories are true.

Besides, people attributed to Nicole many short-term affairs after her breakup. For instance, there were rumors that Scherzinger was seeing the Greek soccer player Pajtim Kasami.

Nowadays, Nicole continues to give performances in many cities of the world. She is changing her location all the time: Nice, London, Bangkok, Zürich. Traveling never tires Scherzinger: she likes living a full life.

In 2016, Nicole voiced Sina in Moana; in 2017, the movie Dirty Dancing-3 starring Scherzinger came out. Rumors had it the singer rejected the offer because of her religious beliefs because the movie character had an abortion to continue her career. However, these speculations had nothing to do with the reality.

In 2017, the star appeared in the show Drop the Mic where famous people had rap battles. Besides, Nicole was a jury member in The X-Factor UK together with Simon Cowell, Sharon Osbourne, and Louis Walsh.

In 2015, Scherzinger started dating the Bulgarian tennis player Grigor Dimitrov who used to be Maria Sharapova’s boyfriend. The next year, Nicole told Fabulous she was happy with the man and hoped her relationship was “the real love.”

In summer 2016, there were many rumors about the singer’s affair with the DJ Calvin Harris who had just broken up with Taylor Swift. As it turned out, Calvin and Nicole were just friends, and Dimitrov had no reason to be jealous.

In January 2017, the singer presented her fans hot photos: she spent her vacation in Hawaii and posted a picture where she was wearing a bikini; she was in perfect shape.