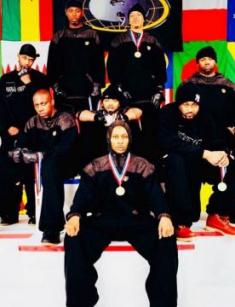 Wu-Tang Clan is considered the most influential rap band of all time, and their debut album Enter the Wu-Tang (36 Chambers) is the greatest record in the history of hip-hop. Like other street poets, Wu-Tang Clan members talk about the hard life of Americans, but through the prism of Eastern philosophy.

Now the Wu-Tang Clan consists of nine self-contained hip-hop artists, but the ideological inspirer and producer of the team is RZA (derived from the word "razor"), also known as Robert Fitzgerald Diggs.

Back in the late 1980s, RZA, along with his cousin Gary E. Grice, nicknamed GZA (from "genius") and a friend Russell Tyrone Jones, known as Ol' Dirty Bastard, tried to promote the band Force of the Imperial Master. The process was complicated, and the young people decided to change direction.

The idea of the new project came to the Americans while watching the film Shaolin and Wu Tang (1983), which tells the story of the confrontation between the two schools of martial arts. The mix of Eastern philosophy and street poetry seemed to be a good idea, and they took the name Wu-Tang (a mountain in China).

The eleventh member of Wu-Tang Clan - Mathematics (Ronald Maurice Bean), a DJ and a producer often remains in the shadows. He has created not only musical mixtapes but also the band's logo which looks like a schematic image of an eagle or shuriken. It's actually the letter "W." Today the logo has become a real brand: their merch, skateboards and other things are decorated with it.

Every single one of the guys had their solo projects, but they were never successful ones. It turned out that their strength lies in unity. The rappers call themselves not just a musical group, but a family, or clan. Some of them carry out several projects at the same time, but the Wu-Family formation unites them.

In November 2004 Ol' Dirty Bastard died from a drug overdose, and Wu-Tang Clan refused to give the place of the friend to someone else.

The debut single "Protect sHzE Neck" in 1993 and the subsequent tour with Kat Nu and Cypress Hill made Wu-Tang Clan known in the underground crowd.

At the same time with group activity, the hip-hop artists wanted to create solo tracks under different labels, that's why it was challenging to find a producer for Wu-Tang Clan. On November 1993 under the label, Loud/RCA came out the first studio album of the artists, called Enter the Wu-Tang (36 Chambers).

The name of the album comes from a legend about the origin of the fighting style Wu-Tang. The peak of skill was the 36th level (сhamber), which can be achieved was by the ordeal. The number is not chosen by chance: on the human body there are 36 deadly spots, and in the mouth of a healthy person – 36 teeth, and for each passed test students instead of the natural tooth were given a golden one.

Enter the Wu-Tang (36 Chambers) is considered a cult album, recorded in the style of hardcore rap and East Coast hip-hop. This music inspired now popular Nas, The Notorious B. I. G., Mobb Deep and Jay-Z on creativity.

Music videos on the songs "Method Man," "Da Mystery of Chessboxin' " and "Wu-Tang Clan Ain't Nuthing ta Fuck Wit" which were featured in Prime-time of The Box channel increased the popularity of the band.

The most famous track from the debut album was "C. R. E. A. M.." Time magazine included it in the 100 greatest songs, and Rolling Stone placed it on the 11th place in the top 50 great hip-hop songs of all time, and the audience of the TV channel VH1 – on the 13th position in the top 100 best rap songs.

In the wake of success, the hip hop artists started their solo careers. In August 1994, RZA released Gravedigga, recorded in the best traditions of horror. In November, Method Man presented Tical. The title track "All I Need" won a Grammy award in 1995. Ol' Dirty Bastard's album Return to the 36 Chambers: The Dirty Version (1995) is considered a classic of hip-hop. "Only Built 4 Cuban Linx..." by Raekwon and "Liquid Swords" by GZA are the most successful solo projects of Wu-Tang Clan.

At the same time, the team launched the Wu Wear clothing line. The project was positioned as another way to make money and now is a cult designing house. The idea to promote music through their own range of clothes picked up Puff Daddy, Jay-Z, Busta Rhymes, Nelly, Ludacris, 50 Cent and many others.

Clothing is not the only product of the artists' activity. For their work, rappers developed a unique slang, which combined the terminology of the nation of gods and lands (a radical African-American religious organization), East expressions, "street" language. There were also new words. So, "Staten Island" for Wu-Tang Clan is "the Land of Shaolin," and "C. R. E. A. M." is the designation of money.

The band's second album, Wu-Tang Forever, was topped by Billboard in June 1997 and sold more than 8.3 million copies. The lyrics differed significantly from the first work of the group. Many of the poems were written under the impression of the teachings of the nation of gods and lands.

Some tracks of the rappers' solo projects are reflected in "Wu-Tang Forever." For example, in "Seven Punishment," there is a sample from the song by Method Man, "Ice Cream Man."

The W (2000) was recorded without Ol' Dirty Bastard, who was serving a prison sentence for violating probation. His voice, however, hit the track "Conditioner" with Snoop Dogg – the young man read his part on the phone.

Shortly before the release of The W, Ol' Dirty Bastard escaped, taking advantage of the moment when being transported from the rehabilitation center to the court of Los Angeles, California. At the premiere party, the hip hop artist remained unnoticed until his friends introduced him. For a long time, the American was hiding from prosecution but was eventually arrested.

In 2001, the discography was replenished with the album Iron Flag. It is noteworthy that initially there was no photo of Cappadonna on the cover, due to strained relations in the team: the rapper was a police informant.

In general, the events of the 2000s can not be called easy for Wu-Tang Clan. In 2004 U-God left the band due to conflict with RZA: the ideological inspirer hindered his success as a solo artist.

Later, when U-God returned, Wu-Tang Clan gave several concerts in Europe and performed on festival Rock the Bells in California, gathering all the boys together (which was rare). This was the last performance of Ol' Dirty Bastard. He died on November 13, 2004, at a recording Studio due to a drug overdose. The album 8 Diagrams (2007) is dedicated to him.

In the 2010s, three studio albums have been released: A Better Tomorrow (2014), Once Upon a Time in Shaolin (2015) and The Saga Continues (2017). The latter was recorded without the participation of U-God and therefore came under the name Wu-Tang, to emphasize the incompleteness of the team.

The Saga Continues debuted at number 15 on the Billboard 200 and number 1 on the Independent Albums. Two singles accompanied the release: "People Say" and "Lesson Learn'd."

In 2019, Wu-Tang Clan together with Public Enemy, De La Soul and DJ Premier go on tour "Gods of Rap."

Probably the hip-hop artists plan to delight fans with the long-familiar hits since there is no information about the release of new albums or songs. However, on Instagram of Wu-Tang Clan, often there are pictures of recording studios, but without the encouraging captions.