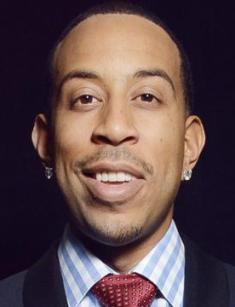 Ludacris is one of the most influential rappers of the 21st century, who was featured in the 2014 Forbes list titled "Hip-Hop Cash Kings," as he earned $8 million. Ludacris took the first step of his journey to success at the age of 9, and now he is a famous hip-hop producer, actor, and singer.

Christopher Brian Bridges (the rapper's real name) was born on September 11, 1977, in Champaign, Illinois, to Roberta Shields and Wayne Brian Bridges. The boy was of African American, English, and Indian descent.

When he was small, his family traveled frequently. When the boy was five years old, his parents moved to Chicago, where Christopher attended Emerson Middle School in Oak Park, then Oak Park & River Forest High School. For a year, Bridges went to high school in Centreville, Virginia. He graduated from Banneker High School in Atlanta, Georgia, in 1995.

Christopher showed his talent early. At the age of nine, he already wrote the first rap song, and three years later, he joined an amateur rap band after moving to Atlanta.

The hobby turned into the passion of his life. From 1998 to 1999, Bridges studied music management at Georgia State University. He succeeded and got a DJ position at Atlanta's Hot 97.5 under the nickname Chris Lova Lova.

At the beginning of Christopher Bridges’s career, the most important achievement was the collaboration with Timbaland on the track "Phat Rabbit" from the album Tim's Bio: Life from da Bassment (1998), which became a hit in many countries, including the USA and the UK. In his early music career, the man collaborated with Dallas Austin and Jermaine Dupri.

At that time, Christopher took the stage name, Ludacris. He stated in an interview on MTV's hip hop program Direct Effect that the name reflects his split personality and is a combination of the words "ridiculous" and "ludicrous."

In 1998, Ludacris began to record the debut album Incognegro (1999), which was a vivid example of the style of southern rap. Timbaland handled part of the production. Critics did not pay much attention to the album, and it did not make it onto the charts. The following experience was more successful.

Back for the First Time (2000) included 12 singles from the album Incognegro, new songs “Stick 'Em Up" and "Southern Hospitality," a remix of "What's Your Fantasy" and a collaboration with Timbaland "Phat Rabbit." The album reached number four on the U.S. Billboard 200, and 133,000 copies were sold in its first week. Nowadays, the album has been certified platinum, and more than 3 million copies have been sold.

The rapper promptly completed his next album, Word of Mouf, releasing it at the end of 2001. The music video for the song “Rollout (My Business)” was nominated for a 2002 Grammy Award. Moreover, Ludacris performed it at the ceremony.

Ludacris had a brief hiatus due to concerts and shooting of music videos, and then the rapper released the single "Act a Fool" for the movie 2 Fast 2 Furious (2003). At the same time, he recorded the first single from his album Chicken-n-Beer, called "P-Poppin" (short for "Pussy Poppin'").

The new songs did not become very popular, and Chicken-n-Beer fell quickly. However, the next single saved the situation. “Stand Up” produced by Kanye West became one of Ludacris' biggest mainstream hits to date. It topped the Billboard Hot 100. Only the single “Get Back” from the fourth studio album The Red Light District (2004) can compete with it.

The performer won the first Grammy Award in 2004 for the hit song "Yeah!", recorded with Usher and Lil Jon. In general, Ludacris has been nominated for the main music award 20 times and won it three times. 2006 was the most fruitful year when his single “Money Maker” and the album Release Therapy topped the charts.

The rapper took a more mature approach to his album Release Therapy, which differed from his earlier discs. The performer also changed his appearance; he cut his pigtails and dyed his hair black.

He released the album Theater of the Mind in 2008, simultaneously with the release of Kanye West’s album 808s & Heartbreak, which topped the Billboard 200. Ludacris’s album debuted at number five on the chart with 213,000 sold units in its first week. Guest appearances include Chris Brown, Lil Wayne, Rick Ross, T-Pain, Jay-Z, The Game and others.

The songs recorded for the album ''Ludaversal'' were unsuccessful, and the singer stalled the recording process for his upcoming album. Only in 2014, after a long hiatus, the rapper went back to work and released the single "Party Girls," featuring Jeremih, Wiz Khalifa, and Cashmere Cat.

After three years of creative ups and downs, Ludaversal (2015) finally pleased the rapper’s fans. The album received positive reviews from critics and debuted at number three on the Billboard 200.

Ludacris is not only a rapper but also a producer. He supported the recording of Justin Bieber’s single “Baby” and Enrique Iglesias’s “Tonight” which topped the charts. His label Disturbing Tha Peace released the singles of Shawnna, Bobby Valentino, Playaz Circle, and many others.

A talented person is talented in everything. For example, Ludacris works as an actor in his free time. He began his acting career in 2003 playing in the action movie 2 Fast 2 Furious. The rapper landed one of the leading roles of Tej Parker, a race host and friend of Brian O'Conner (Paul Walker).

In the beginning, Ludacris played cameo and bit parts in the movie Katt Williams: American Hustle (2007), Fred Claus (2007), RocknRolla (2008), Max Payne (2008), the musical films Paper Chasers and Ludacris: The Red Light District about his work and hip-hop culture in general.

Christopher Bridges has four children. The first daughter, Shaila Scott, was born in 1996, the second girl, Karma, in 2001. Their mother is an attorney from Atlanta.

In 2009, Ludacris began dating model Eudoxie Mbouguiengue. Their wedding took place on December 26, 2014, in Costa Rica, on the day when the performer made a marriage proposal to his beloved woman. Christopher wrote about the festal occasion on Instagram, and the text underneath their photo was:

Shortly before the wedding, in December 2013, Christopher became a father once again. It is noteworthy that the mother is not Eudoxie, but his longtime friend, Tamika Fuller. The child's name is Cai Bella Bridges. In early June 2014, the long-awaited baby was born in the family.

Ludacris prefers to keep fit. There are numerous gym workout videos on his Instagram page. As a result, he has an impressive muscular body. The performer is 5.67 ft. (173 cm) tall, weighing 167.55 lbs. (76 kg).

In February 2019, on Instagram, Ludacris promised his fans to release new films and singles. So, Bridges plans to play in several projects, including the leading role in the drama John Henry.

Since March 2017, the rapper has been working on the tenth studio album. Ludacris has released one single called "Vitamin D" featuring Ty Dolla Sign so far. The performer does not tell the release date of the anniversary album.

Ludacris has an estimated net worth of $25 million.