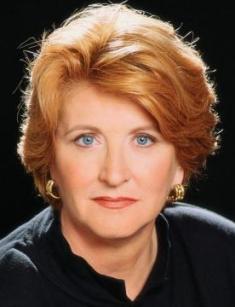 Similar to Jackie Collins, the writer Fannie Flagg stepped into the world of literature from a movie set: the novelist can boast a long filmography. However, the creator of Sunday Simmons and Charlie Brick described Hollywood morals while Flagg pictured the lives of her compatriots from the south of the United States. The classic of the American literature Harper Lee praised Fannie’s works.

The would-be writer was born in Birmingham, Alabama, in 1942; she received the name Patricia Neal. Some 300 000 people lived in the girl’s hometown; the population has reduced by a third by now.

Patricia was the only kid in the family of Marion Leona and William Hurbert Neal. Her childhood was darkened by dyslexia: it was extremely difficult for Flagg to read and write. However, she created her first play at ten.

At 14, Patricia got hired as a backstage crew member at the Birmingham theater troupe. At 17, the young woman participated in the Miss Alabama pageant and gained a scholarship that helped her study at a local acting school.

Soon, it was necessary to register at the Actors’ Equity union. However, the future Academy-Award winner and the wife of the writer Roald Dahl, Patricia Neal, had already been there. Thus, the young talent invented the stage name “Fannie Flagg”; it took her only an hour to come up with it.

Flagg participated in Five Easy Pieces starring Jack Nicholson and Stay Hungry with the beginning actor Arnold Schwarzenegger. Besides, the artist regularly appeared on television and worked on episodic roles in Match Game. Sometimes, it was difficult for her to voice stranger’s words, and Fannie began to write scripts for comedy programs.

When the actress played in Broadway’s The Best Little Whorehouse in Texas, she suffered from the cold she was not used to. Fannie started thinking if she took roles from other, more talented actresses, and if she should return to her childhood dream, writing. Soon, she left the theater and devoted her life to books. Although the woman came back to cinematography sometimes (for example, she collaborated with Melanie Griffith in Antonio Banderas’s Crazy in Alabama in 1999), literature became her major activity.

Fannie Flag debuted with the novel Daisy Fay and the Miracle Man that had been initially released under the title Coming Attractions. It was the autobiographical coming-of-age story in the diary form. The main character, the eleven-year-old girl, begins to write it in 1952.

Fannie Flagg’s books are united by Leo Tolstoy’s idea, slightly reworded: life is not finished at 31, 48, or 86 years old. This theme appeared for the first time in Fried Green Tomatoes at the Whistle Stop Café. Unlike the debuting book, editors did not favor this work: they agreed it was a decent book, yet readers would hardly be interested in the story about an old lady who lived in a senior center.

Flagg had to face numerous rejections until she finally signed the contract. The result was more than awarding: Fried Green Tomatoes became an international bestseller. As the story runs, the main character, Evelyn, is overcoming a middle-age crisis and the alienation of her husband and children and communicating with Ninny; the old lady is almost 90 and continues to enjoy her life. In 1993, the writer added the cookery book Fannie Flagg’s Original Whistle Stop Cafe Cookbook: Featuring to the novel and made a script for the movie; the premiere took place in 1991.

The next stories, Can't Wait to Get to Heaven and I Still Dream About You: A Novel, are also united by the same idea: it is too early to die. The writer backs out of realism in the former story and shows the woman named, Elner who dies by accident and reaches Heaven. As she talks to God, He realizes it is too early for her to pass away: her closest people’s lives pale into mere existence.

The latter book pictures a perfect woman who is considering suicide before her 60th birthday. When an ideal suicide plan is made, it turns out there is no need to leave this life.

The novels Standing in the Rainbow and Welcome to the World, Baby Girl! are also popular among readers. The woman touches upon the racial discrimination issue and amorality on television.

Little is known about Flagg’s romances. The writer is gay. In the late 1970s, she was dating the LGBT activist and prolific writer Rita Mae Brown (Rubyfruit Jungle); later, Brown fell in love with the tennis player Martina Navratilova. Flagg reportedly lived with the actress Susan Flannery (The Bold and the Beautiful) who felt ashamed of her homosexuality.

In her interview to Melissa Parker (Smashing Interviews Magazine), Fannie said she liked picnics with friends and tennis. However, she called people-watching her main hobby:

“My favorite thing in the world is to people watch. All I need to do is go sit somewhere, and I’m highly amused and entertained. I don’t know why, but I am. You know how people bird watch? I people watch”.

Today, the writer lives in California. She looks noble and grand, just like in her youth, in the picture attached to the interview that came out after the novel The Whole Town’s Talking was released.

In 2017, the novelist promised a new collection of stories; she is likely to be working on it now.

Fannie Flagg’s net worth is unknown.