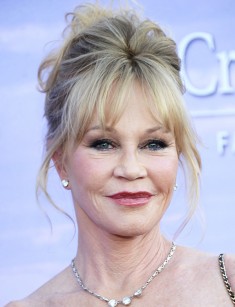 Melanie Griffith is a star of the American cinematography, who has become famous for the major role in the picture Working Girl for which she has got the Golden Globe Awards.

The girl was born on the 9th of August of 1957 in New York, in the family of the famous model and actress Tippi Hedren and Peter Griffith. Her father worked as an employee of the advertising agency. Four years later the spouses broke up and soon they created their new families. Tippi has connected her life with the producer Noel Marshall and moved to California with her daughter. Her father stayed in New York; he has had two more children in his new family.

Melanie has got mixed roots: her ancestors came from Norway, Sweden, Germany, and England. Due to the creative skills of her parents, the girl has got engaged in the shootings since the early age. So, at the age of nine months, her father Peter Griffith shot his daughter in the commercial. In early age, Melanie went to study at the acting courses in Hollywood. In youth, the girl continued her education at Adler's school in New York. At the same time, the girl tried herself in the first roles, performing in the episodes of the movies The Harrad Experiment, Smile and Starsky & Hutch.

Melanie’s role in the psychological thriller Night Moves directed by Arthur Penn, and The Drowning Pool by Stuart Rosenberg became the first serious roles of the actress.

The actress has grounded herself in the horror genre. Later, she has brilliantly finished with this genre after she performed the leading role in the comedy under the title. She's in the Army Now. It was her first comedy experience, and she has coped with it successfully. Together with the actresses Jamie Lee Curtis, Kathleen Quinlan, Susan Blanchard, Julie Carmen, Janet MacLachlan Melanie shows the peripetias of the military service demonstrated with humor.

The young actress has taken part in the experiment of her mother and stepfather who have taken a real lion to their house for the creation of the thriller about animals under the title Roar. During several weeks the king of the wild animals nicknamed Neil was living among the members of the family of Tippi and Noel, and the camera captured the play of the lion with Melanie and her stepbrothers. This experiment could cost a life to the participants of the shootings: more than seventy people including Melanie were injured. The movie was released in 1981, at the same time with the comedy about the women's fighting force under the title. She's in the Army Now.

In 1982, in connection with the road accident on the road, the experts found in Melanie Griffith's blood a large amount of narcotic substances. The girl was taken to the rehab center for several years to get the treatment. In two years the young actress successfully came back to the screens. At once she was invited to play the leading role in the pseudo-thriller Body Double directed by Brian De Palma. This is a mysterious story about the assassination of the beautiful woman who was living in the opposite house. The actors Craig Wasson, Melanie Griffith and Gregg Henry performed the leading roles in this movie. This movie discloses the secrets of the underground criminal clan. The spectators will find out who was the criminal at the end of the picture.

After the actress had performed the role of the relaxed beauty Lula in a company of the charismatic men (Jeff Daniels and Ray Liotta) in the picture Something Wild, Griffith began to work on the main role in the comedy musical Working Girl. Besides Melanie, Sigourney Weaver, Harrison Ford, and Alec Baldwin entered the star cast of this picture. This picture has brought Melanie the nomination for Academic Awards and desired Golden Globe Awards. The creators of the movie Mike Nichols, Mark Lawrence and Douglas Wick earned the profit in hire which was three times bigger than the budget.

The actress adores acting in the intriguing pictures in a company of famous, handsome actors. In the same year with the music, there was released the crime drama Stormy Monday in which Melanie received the leading role. The actors Tommy Lee Jones, Sting and Sean Bean became her partners in this picture.

In the nineties, Melanie was less active in her creative career except for her major roles in the movies Milk Money and Shadow of Doubt. For the comedy The Bonfire of the Vanities where Griffith performed one of the leading characters there was chosen the star: Tom Hanks, Bruce Willis, Kim Cattrall, Morgan Freeman, Saul Rubinek. This screen adaptation of the novel of T. Wolfe earned more than $15 million in hire in the USA only. In the crime drama A Stranger Among Us the character of Melanie, a courageous policewoman, gets into the Hasidic community to find the criminal. John Pankow and Tracy Pollan played in the leading roles in this movie.

The roles of the actress in the movies Two Much, Paradise and Born Yesterday are also considered to be the successful works of this time.

Even though Melanie received the secondary role of the daughter’s mother in the sensational drama Lolita featuring Jeremy Irons and Dominique Swain, the movie critics highly appreciated her acting skills. In the late nineties, Melanie mastered the sphere of the television industry and took part in RKO 281 which was created for HBO channel. This Melanie’s work appeared to be so successful that she received the Emmy award for Best Supporting Actress.

At the beginning of 2000-s Melanie Griffith distinguished in the historical comedy The Night We Called It a Day directed by Paul Goldman. The plot tells about the journey of the gold voice of America Frank Sinatra to Australia with tours and the unpleasant case with the insults which happened during it. The reaction of the Australian public was somewhat unexpected for the singer, and Frank couldn’t find a way out of that situation for a long time.

At the beginning of 2000-s, the actress was actively exploring the genre of the musical which was new for her and successfully debuted in the musical Chicago. The critics highly appreciated the role of Roxie performed by Griffith. Melanie also appeared in the series Nip/Tuck which was released in 2003, and in the animated fantastic comedy Robot Chicken.

Due to these projects, Griffith began to gain popularity as well as in the mid-nineties.

The actress Melanie Griffith has differed in beauty since young years. In her appearance, she wasn't less beautiful than her gorgeous mother. Griffith is 176 cm tall and weighs 65 kilos. Her charming face and slim athletic figure have made Melanie one of the sexiest Hollywood celebrities. But with the time the actress began to have surgical plasticity. In part, it was caused by her fear to lose her partner.

There is information that Melanie’s spouse is three years younger than she. Despite the protests of her husband, Griffith regularly had face lifting, eyelift, botox injections, and face contouring plasticity. As a result of so many operations, at present, the face of the actress doesn't look natural. Moreover, she was diagnosed with the skin cancer at the initial stage which was successfully safely stopped by the doctors.

Melanie Griffith got married for the first time in 1975 to the actor Don Johnson who was her partner in the picture Night Moves at that time. But their marriage has lasted for four years only. The American actor of Cuban origin Steven Bauer has become her second husband. He has become famous for his role in the picture Scarface. He became the father of first Melanie’s child. Their son Alexander Griffith Bauer was born in 1985.

In two years the boy’s parents separated, and Griffith returned to her first spouse Don again. In 1989 Melanie gave birth to their daughter Dakota Johnson. The girl can easily compete with her grandmother and mother in popularity as an actress. In 2006 she awarded the title of Ms. Golden Globe.

In 1996 during the shootings of Two Much Melanie met the Spanish actor Antonio Banderas. In a short time, she got married to him and left Don Johnson. Despite the difference in the age difference, the marriage of the actors was so strong that they were considered to be the exemplary Hollywood couple. During the first year of their life together Melanie gave birth to her second child - daughter Stella.

Griffith’s children from the previous marriages were living together with their mother and stepfather. But eighteen years later their marriage broke up. Most people consider that they separated because of the new love affair of Banderas with Nicole Kempel, the owner of the European bank. Nevertheless, Melanie has warm, friendly relations with her ex-husband.

During several years Melanie began to appear on the screens less often. The series Autómata and The Path were the latest works of the actress. Moreover, she has voiced over the movies. The actress continues to participate in the project Hawaii Five-0. In 2017 there will be released the multi-series movies The Disaster Artist and The Pirates of Somalia.

After the divorce in 2016, Griffith moved to the mansion in Assen and spent a lot of time in solitude. At present, her children have become the major care for the actress. Together with Dakota, the actress has shared the success of her daughter’s first loud picture of Fifty Shades of Grey. Melanie and Antonio have attended the graduation party of the younger daughter Stella.

In 2017 Griffith is going to celebrate her 60’s birthday. Moreover, soon there will be released the new movie Fifty Shades Darker in which her daughter Dakota will play the leading role. 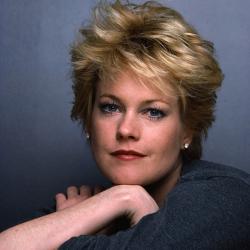