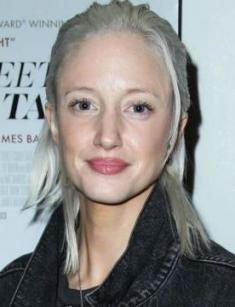 In her filmography, the British actress has remarkable biographical roles. Andrea Riseborough has brilliantly embodied the roles of such contemporary heroines as Margaret Thatcher, Wallis Simpson, Svetlana Stalina on the screen.

Such outstanding directors as Alejandro González Iñárritu, Roger Michell, Roger Michell, Joseph Kosinski etc. managed to disclose the talent of the actress favorably. Riseborough even played at the director's projects of Madonna and Tom Ford – in the movies W.E. and Nocturnal Animals, in such a way she debuted in Hollywood.

Andrea Louise Riseborough was born on the 20th of November, 1981 in the town of Newcastle upon Tyne. Her father George Riseborough is a dealer of used vehicles. Her mother Isabel Johnson is a doctor-cosmetician. Both of her parents were actively engaged and interested in politics and belonged to the activists of the ruling political party. Andrea became the first kid of the couple. Then their second daughter Laura was born, she is also an actress at present.

Their daughters made a completely conscious choice, although no one in their family had any relation to cinematography, except the grandmother who sold tickets to the cinema. Though, if talking serious about it, she often brought little George to the cinema during the weekend, where he enjoyed the movies and fell in love with the visual arts. Andrea has also inherited this love.

'I can 't exactly say when I became aware of the fact that I should become an actress. Maybe it was that moment, when I saw Marlon Brando in the movie A Streetcar Named Desire. And perhaps, when I began to have a sister, I had to fight for my parents’ attention with her"- the actress told in the interview.

From her part, her mother taught her daughter to read books, and she was reading it, especially admiring Shakespeare's works. In the movies and books, Andrea was looking for the answers to her not childish questions: about the fate, the frailty of the world, and her destiny. All these things made the girl feel distant from her peers; therefore, at school, she was closed and not sociable enough.

The family could send their daughters to a good private school. Having graduated from this school, Andrea entered the Royal Academy of Dramatic Arts and got a diploma in 2005. Even before this, the young Riseborough appeared on the stage of the People 's Theatre for the first time.

The actress debuted on the screen in the graduation year from the university. Andrea appeared in the popular TV series, Doc Series having played a role in one of the episodes.

The next year the girl received the part, though it was in an episodic one in the movie which awarded several world movie awards and was nominated for Academic Awards and Golden Globe Awards due to the acting of the legendary Peter O 'Toole. To tell the truth, after the movie Venus, Riseborough was noticed, and already in 2008, she played the leading role in the TV movie Margaret Thatcher: The Long Walk to Finchley. For this role of the British premier minister, she was nominated for BAFTA Awards.

The same year, Andrea appears in the miniseries The Devil's Whore featuring Michael Fassbender and Dominic West. The action of the series takes place in the 17th century, the character performed by Riseborough called Angelica is a woman whose first and second husbands die by a fatal accident. The representatives of the law government want to execute the unfortunate woman, called "devil 's mistress," but there happens a miracle.

Among the movies which are significant in Riseborough’s career, there is a British dystopia drama entitled Never Let Me Go, in which the young actress performed with such English movie stars as Keira Knightley and Carey Mulligan.

In 2011, destiny smiled to Andrea, and she was really lucky in the creative sphere. Madonna approved her for the leading role in her second director’s movie under the title W.E., dedicated to the famous love story of the 20th century of the English King Edward VIII (James D 'Arcy) and the American Wallis Simpson (Andrea Riseborough). And though the movie didn’t earn a huge box office in the hire in Great Britain, Riseborough’s acting was recognized by the movie critics.

The next significant movie of the British woman was a crime drama Welcome to the Punch (2013) about the struggle of two sworn enemies - the detective Max Lewinsky and a former criminal Jacob Sternwood. Andrea played the partner of Max called Sarah Hawks.

At the same time with this movie there came out the first blockbuster Oblivion with featuring Andrea Riseborough. The fantastic fighter directed by Joseph Kosinski gathered on the film set such celebrities as Tom Cruise, Olga Kurilenko and Morgan Freeman. Riseborough performed the role of the signalwoman Victoria. She and Jack (Tom Cruise) are living at the surveillance station in the year 2077, and the aliens control their consciousness.

But during one of the scouts, Jack was captured by the people who are left on Earth in a very little amount. He remembers his past and organizes a revolt against the aliens. For his role, Andrea won in the nomination for Best Breakthrough at Hollywood Film Festival. The actress herself told that the role in this movie was her "least favorite" work.

The movie Birdman directed by the Mexican Alejandro González Iñarritu made a real furor in 2014 at Cannes Film Festival. The movie tells about the actor Riggan Thomson (Michael Keaton), who once performed in the cult movie about Birdman and prepares to stage his play on Broadway. Alongside this, he tries to get along with his life which went wrong. Andrea played the role of Laura –Riggan’s girlfriend. The movie earned more than 50 cinematic awards, including Academic Award for Best Movie.

In 2016 the British actress enriched her filmography with the director known all over the world as a designer – Tom Ford. The artist directed the movie Nocturnal Animals about the complex relations of the couple which was married before. Riseborough played the role of the supporting called Alessia Holt.

Next year Andrea delighted her admirers with two movies with her participation – the satirical parody The Death of Stalin, in which the actress embodied the character of his daughter Svetlana and also the sports drama-comedy entitled Battle of the Sexes. The movie tells about the significant match between Bobby Riggs and Billie-Jean King, which was destined to solve the dispute on the dominating role of male and female tennis. Riseborough played the role of the hairdresser Marilyn Barnett who is engaged in the love affair with the leading character Billie-Jean played by Emma Stone.

In 2017-2018 the actress played roles in rather original projects. The series under the title Black Mirror is devoted to the side effects of the modern technologies and presents a range of the autonomous unrelated plots (the actress played a role in the episode Crocodile).

The movie Mandy turned out to be a mixture of genres: horror, fighter, thriller. In this movie, Andrea and Nicolas Cage performed the roles of the main characters - Mandy Bloom and Read Miller. They live in the desert, creating their personal paradise here. Though, when the strangers rush in the paradise and destroy everything close and important for the local people, Read begins to revenge.

This paradise, destroying everything close and native, Red begins revenge.

Andrea received one more star role in the drama Nancy directed by Christina Choe. Nancy Freeman knows that she is an adopted daughter, and after the death of her foster mother, she decides to find her biological parents. The first people she thinks of are Lynch couple whom she saw in the TV-show. Nancy begins her investigation. This movie won an award at the Sundance Film Festival.

Andrea Riseborough doesn’t give any reason to the press to learn something about her personal life. Nothing is known about this side of her biography. There’s information that the actress isn’t married and doesn’t have children. Nothing is known about any of the actress’s love affairs as well. At the same time, nobody can stay indifferent seeing Riseborough’s appearance. Having a low height (166 cm), the actress is a bright and unusual individuality, and she is experimenting with her hair color and hairstyle all the time.

There are no photos on the personal Instagram of the actress, o the fans can’t admire it. Therefore, the new pictures of the actress appear on the fan pages in the social networks – and that's a real joy for her numerous admirers.

In 2018, Andrea Riseborough started playing in the series Waco, in which she continues to shoot till now. Moreover, in 2019, the actress will delight her admirers with the new leading role in the movie The Kindness of Strangers.

At present, Andrea’s net worth is $5 million.